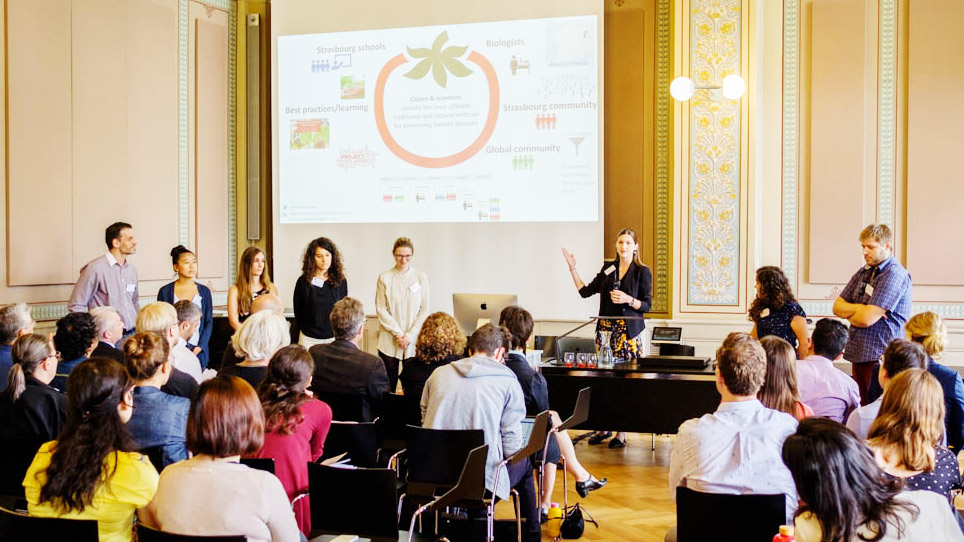 Citizens who research and gather data: digital media are opening up whole new ways for science to arrive at new insights. Citizen science is in gold rush fever, with researchers around the world – at UZH as well − sounding out the potential of crowd-sourced research and hatching promising new project ideas.

24 hours to come up with an idea

This year’s LERU Doctoral Summer School, organized by the Graduate Campus at UZH under the banner “Citizen Science – Nexus between Research and Public Engagement,” revolved around participatory research. Forty-four junior researchers from all over Europe met to exchange and develop professionally. At the end of last week at UZH, seven Summer School working groups presented their ideas for citizen science projects, and discussed them with their peers and a range of experts.

Under great pressure – they had only around 24 hours –they came up with project outlines covering an astonishingly broad array of research topics. The ideas included enlisting the help of laypeople to ferret out and document old lost movies, analyze and measure medical images to improve the diagnosis of disease, and track down harmful asbestos in cities.

Again and again the presenters stressed that citizen science shouldn’t just be in the interests of science, but should benefit the laypeople doing the research as well. Many of the projects had very concrete practical relevance. For example one project addressed the question of how amateur gardeners could grow and harvest beautiful, tasty tomatoes naturally, without the use of chemicals, in garden beds, balconies, or terraces, using the accumulated knowledge of laypeople and experts to find the answer while at the same time generating data for researchers.

These days many people use their smartphone as an alarm clock. But according to the “LetsWakeApp: can we find our perfect alarm?” group, most of the programmed alarm tones aren’t very appropriate: they’re stressful and elicit negative feelings, which is unhealthy and bad for productivity. Now the idea is for an app to find the right alarm tone on an individual basis and thus guarantee a good wake-up experience; at the same time it will also enable general data on the perception of sound to be gathered and made available to researchers. The young scientists also reckoned that sleep researchers would benefit from the data generated by the app.

Alongside questions related to the scientific benefits, much of the critical discussion of the various project ideas revolved around issues related to data protection and privacy – showing just how complex citizen science projects are. It’s not enough to merely have a good research idea. A successful project also has to meet the relevant ethical and legal requirements.

What’s needed above all for citizen science to flourish is engaged laypeople to take part in research projects. How can members of the public in Switzerland be encouraged to participate? According to the members of the “BeeCare – How to Engage the Public in Environmental Research” project, it’s by making research playful. They came up with the idea of a game app – a cross between Tamagotchi and Pokémon, as one participant explained – that can be used to investigate and document biodiversity in cities. The plan would be to test the app in Zurich. Sounds exciting!