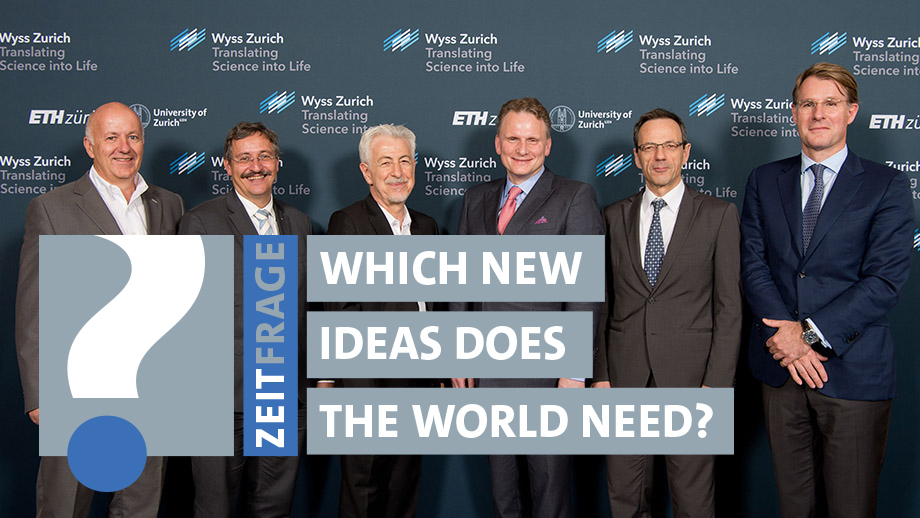 President Michael Hengartner summed it up in his closing keynote speech: “Wyss Zurich is off the ground and flying high. Bravo!” Wyss Zurich, a joint research and development center of the University of Zurich and ETH Zurich, was founded two years ago thanks to the support of entrepreneur Hansjörg Wyss, and on Wednesday evening its second Annual Event took place. The center’s record to date speaks for itself: Nine projects in the area of robotics and regenerative medicine have been launched since the center opened in spring 2015. The most advanced of these, specifically the start-ups Wingtra (robotics) and Cutiss AG (regenerative medicine), are already among the most successful start-ups in Switzerland. In fact, Wingtra has already introduced a successful product onto the market, while Cutiss AG has started testing its laboratory-developed skin on humans.

In keeping with its motto “Translating Science into Life”, the overarching objective of Wyss Zurich is to support projects in successfully making the difficult transition from laboratory to market. It aims to transform the cutting-edge research in regenerative medicine and robotics being carried out at UZH and ETH into specific products and solutions that will benefit society. It is with this step in particular – turning scientific findings into commercially viable ideas – that many projects run into difficulties. Professor Simon Hoerstrup, Director of the Institute for Regenerative Medicine at UZH and Co-Director of Wyss Zurich along with ETH Professor Roland Siegwart, spoke of a “valley of death”: “It’s a long journey to bring science into the clinic. It is our mission to bridge this valley of death.”

Two of the speakers at Wyss Zurich’s Annual Event, which was attended by around 200 invited guests, were the leading US researchers Oussama Khatib (robotics) and Andre Terzic (regenerative medicine).

Stanford researcher Oussama Khatib, one of the world’s leading robotics specialists, delivered a lecture that was as informative as it was entertaining. “I’m going to dive with you,” was his tantalizing opening line, a reference to the robot developed by his team and named Ocean One. Khatib and his team had recently undertaken an underwater expedition in the French Mediterranean with the robot, which weighs around 240 kilograms. Their goal was to explore the wreck of La Lune, a ship that sank in 1664.

Parts of the shipwreck had never been explored before, and its treasures remained untouched by human hands. But Ocean One’s haptic sensors meant that when the intelligent robot touched objects on the ocean floor, the scientists who were controlling the robot from the expedition ship were able to feel the objects on a type of joystick. The mixed team of engineers and archaeologists were then able to use the robot to recover a 350-year-old vase from the wreck.

“The new generation of robots is much less pre-programmed – today they need manipulation skills,” explained Khatib. With the help of videos, he showed the audience how robots learn: Humans teach the robots simple movements such as putting a lid on a teapot. “Robotics has been undergoing a revolution in the last 15 years,” concluded Khatib, with infectious enthusiasm.

Bodies to heal themselves

The second lecture of the evening was given by Andre Terzic, Director of the Center for Regenerative Medicine at the renowned Mayo Clinic in Rochester, Minnesota, about changes in the field of medicine in the 21st century. He observed that there had been a paradigm shift in medicine – from medicine that fights illness to medicine that restores health. “We want to teach the body how to heal itself,” he explained.

Terzic also stressed the importance of disruptive innovations in the field of regenerative medicine in view of an ageing society. Such innovations could be of use for example in heart abnormalities or birth defects, in muscle degenerative or neurodegenerative diseases, in the fight against cancer or in face transplants.

“For the future, we need solutions that are scalable beyond the individual case. Those solutions should not be specific to certain centers but available for physicians ‘off the shelf’.” In this respect, the Mayo Clinic’s approach seems to echo that of Wyss Zurich: Lead research across the “valley of death” so that it can be of specific use to society.