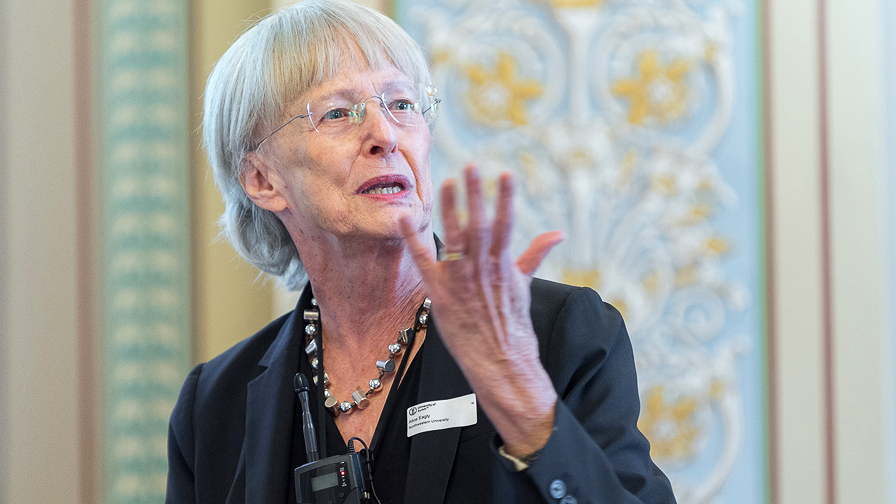 It is still unusual to find women in the upper echelons of management, and women continue to face considerable obstacles when climbing the career ladder. But after so many years of fighting for equal opportunities, why is that still the case? Alice Eagly, renowned social psychologist at Northwestern University in Evanston, Illinois, has done research into the reasons. The current Hedi-Fritz-Niggli visiting professor at UZH has spent years researching gender topics, specifically stereotyping and leadership. A few years ago, she published the very well-received book Through the Labyrinth, an analysis of the situation of women in leadership positions. The labyrinth was presented as a metaphor for women’s path to the top: Too often it meandered and led to a dead end.

“Let’s start with the good news,” said Eagly at the beginning of a lecture she gave last Tuesday at UZH as part of the CHESS lecture series and at the invitation of the Department of Psychology. “The number of women in leadership positions is growing slowly but steadily.” However, Eagly said that there was still a gender gap in business and politics, including in Switzerland. In the 100 largest employers in the country, only eight percent of management were women in 2016. Ten years ago, that figure was only four percent. The number of women in the US parliament stands at 19.4 percent (101st position in the world), and in Switzerland at 32.5 percent (36th in the world).

According to Eagly, one of the reasons for this slow progress is the perception in society of women’s leadership qualities. That is also what a random worldwide sample from 2016 showed: When asked whether they thought women were as qualified to run a country as men, 52 percent completely agreed, 26 percent agreed, 10 percent disagreed, and 12 percent were convinced that a woman would not be capable of it.

Another American study in 2013 looked into whether employees would rather have a male or female boss. 46 percent of the survey respondents (male and female) said that they didn’t care whether their boss was a man or a woman, 33 percent said they would prefer a male boss, and only 20 percent preferred a female boss.

There are evidently still clear prejudices against women in leadership positions, summarized Eagly. She believes the reasons for such prejudice are discrimination and entrenched gender roles. For example, qualities such as self-confidence, commitment, aggressiveness, courage, dominance, and stamina are still seen as male characteristics, while women are assumed to be sensitive, friendly, and to have good social skills. The crux of the matter is that for many people, the traditionally male characteristics correspond more to their idea of a good leader. “That works to the disadvantage of women who want to get into leadership positions,” said Eagly.

Female bosses then often find themselves faced with a dilemma. Even if a woman is actually a more competent leader than a man, she may adopt a softer leadership style because otherwise she won’t be accepted. “People don’t like it when female bosses behave in the same way as their male colleagues.” Dominant and aggressive behavior in male managers is generally accepted, whereas female managers are criticized for being too hard if they behave in the same way.

In addition, Eagly pointed out, studies show that asserting oneself, either verbally or non-verbally, is riskier for women than it is for men. Showing determination can damage women’s career chances, said Eagly. Meanwhile, “it is assumed that women will be friendly, while for men it is a plus if they are.” This means that when women are trying to define their own leadership style, they can find themselves in a lose-lose situation. How can they successfully combine the “niceness” that is expected of them with the leadership qualities of dominance and assertiveness? One way they may manage to do this is by choosing to work for socially-oriented or charitable organizations, for example. Not-for-profit organizations have a much higher proportion of female CEOs than other types of companies, and women are also represented in greater numbers in the higher education sector. These sectors correspond more to the traditional idea of women’s roles, explained Eagly.

But even though this perception of traditional roles persists, other counter myths have taken firm hold – for example the belief that the participation of women in groups makes them work more efficiently, or that profits are higher in companies with more women on the boards. “It’s not that simple,” said Eagly. However, she explained, what is true is that women in leadership positions set a different tone over time because they are in general more democratic and participative than men. And that has a positive effect on the working environment.

Guest Colloquium of the Department of Psychology

Alice Eagly was speaking at an event organized by the Center for Higher Education and Science Studies (CHESS) at the invitation of the Department of Psychology where she is currently a visiting professor.