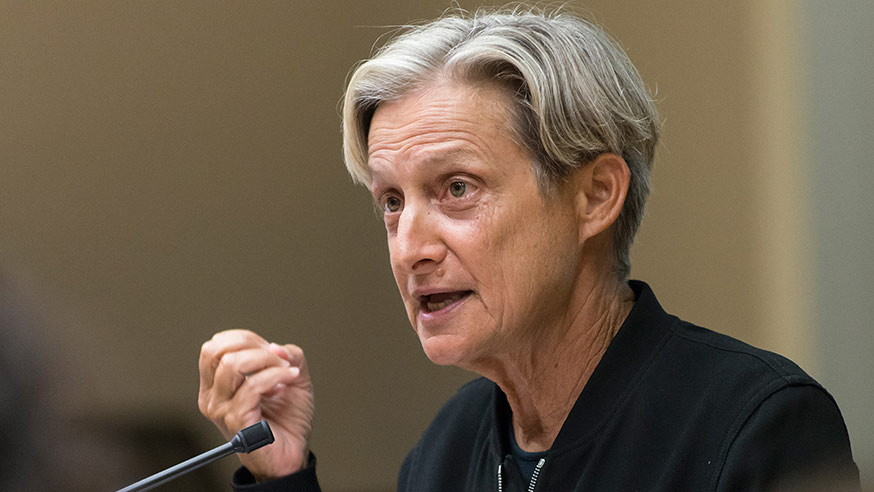 “There has never been a feminism without a backlash,” said American philosopher Judith Butler at UZH. (Image: Yvon Baumann)

From a feminist perspective, times have certainly changed. Twenty-five years ago it seemed as though much had been achieved – nowadays, that’s not so easy to say. On the on the one hand we’ve seen the election of Donald Trump and the breaking of the Harvey Weinstein scandal, while on the other hand, there have been events like the Women’s March, probably the largest-ever demonstration against a newly elected US president.

Much has indeed been achieved in terms of feminism, but at the same time the backlash is never-ending. The boundary lines delimiting what is and is not acceptable to say in public have proven to be alarmingly fluid, while racist, misogynistic, and xenophobic statements have become socially acceptable in many circles. Against this backdrop, the symposium marking the 25th anniversary of the publication of Elisabeth Bronfen’s book Over Her Dead Body was characterized by contradictions.

Speaking at the event, Judith Butler put the matter plainly: “There has never been a feminism without a backlash.” In the nineties, many people read the situation differently. Back then, recalled Elisabeth Bronfen, one might have thought that we were finally living in an enlightened, liberal, democratic culture in which it was no longer necessary to talk about women’s rights. That assessment looks different today: The work of feminism is far from being done.

Looking back on the past 25 years

The UZH symposium “Over Her Dead Body Redux. Feminism for the 21st century” brought together a distinguished group of theorists and academics who have made influential contributions to the debate over the last 25 years. In addition to Judith Butler (Berkeley), Mandy Merck (London), Barbara Vinken (Munich), Isabel Gil (Lisbon), Alessandra Violi (Bergamo), and Gesine Krüger (Zurich) took part. 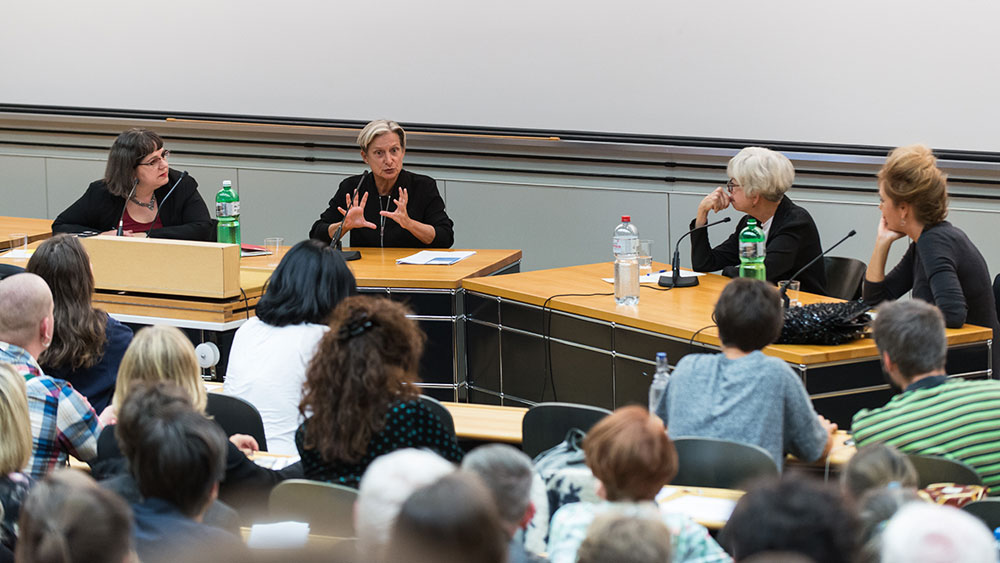 The aim of the symposium was to evaluate the last 25 years from a feminist perspective while also looking ahead and imagining the possibilities for institutions and society in a feminist culture of the 21st century. What can the past tell us about the present? Which paths of the feminist roadmap should we continue to follow, and which need to be reassessed or even abandoned 25 years on? What is it imperative to hold on to and remember, especially when thinking about the next generation?

The two-day symposium drew a great deal of interest from the public, and the opening evening alone was attended by more than 600 people eager to hear Judith Butler’s keynote speech and the subsequent roundtable with Bronfen, Butler, Vinken, and Merck. More than half of the attendees were students, showing that feminism is alive and kicking among the younger generation.

Going against the grain

The subject of Bronfen’s famous work Over Her Dead Body (1992) is the fascination with and “pillaging” of the beauty of dead women in art, philosophy, and literature. This subliminally misogynistic topos receives a surprisingly subversive treatment in Bronfen’s analysis. The book is a feminist appropriation and reinterpretation of a contradictory old trope in which the dead woman is treated by male authors as a kind of trophy.

Bronfen was particularly interested in the dialectic within which the aesthetic depiction of the dead female body exists: the beautiful corpse is at once the object of a perverse obsession and also a subject with her own voice and story. But because she cannot (can no longer) speak, we are forced to project our own reading and interpretation onto her. According to Bronfen, in order to recognize this duplicity, we have to develop a different way of seeing, an “oblique” viewpoint.

The contribution of the humanities

The themes of Judith Butler’s electrifying opening lecture tied in with Bronfen’s way of thinking. Her subject was the refugees at Europe’s borders. When thinking about the mechanisms of inclusion and exclusion, Butler said that we should not always look to the typical narratives of victimization and victimhood. She explained that there are other ways of seeing things, pointing as an example to the Jewish war photographer Lee Miller, who accompanied the allied troops during the Second World War and, after Hitler’s suicide, photographed the dictator’s apartment, in particular posing in his bathroom.

The second day of the symposium illustrated why it is vital for feminism to continually revisit accepted cultural conventions. That is the only way to avoid falling back on established narratives and thereby allowing these to become the only truth. But doing so involves confronting the superficial, yet increasingly aggressive, criticism of deconstructionist, post-structural, and post-modern interpretations.

Elisabeth Bronfen summed up proceedings by saying it was the task of the humanities to counter the pernicious trend for simplification  by demonstrating the irreducible complexity of social contexts.  Embracing complexity is something that takes practice – this is where the humanities have a vital role to play.