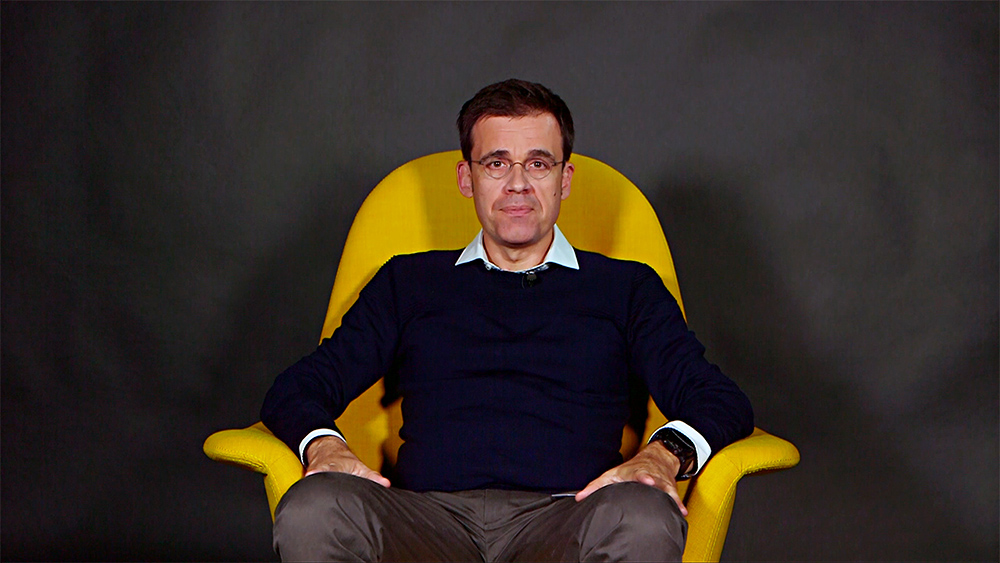 “We’re often unaware of how transparent we become once we leave traces on the web,” explains Algesheimer. This is why it is important to raise awareness regarding our digital footprints. (Image: provided)

Online payment services collect user data, fitness gadgets store our health data, our online comments document our interests, mobile telephones can use GPS to pinpoint our location and record how much time we spend there, and the major retailers know what we buy and which products we prefer. Data protection standards are fairly high in Switzerland, and yet companies often fail to fully inform their customers about what kind of data they collect and what they do with this information.

Many consumers are not particularly aware of just how diverse the traces are that we leave behind in the web of data. This is the area of expertise of René Algesheimer. He is professor of business administration and also heads up the University Research Priority Program “Social Networks”.

According to Algesheimer, it is often quite amazing what data reveals about us. He illustrates this point by giving an example from his research into the role of group dynamics in comments sections.  Comments posted by readers are freely accessible online and can be downloaded and analyzed using algorithms.

“We scraped data from large news website pages of CNN and NBC,” says Algesheimer. Scraping refers to all kinds of processes to evaluate website texts. The researchers’ aim was to filter out those commenters who strongly influence a discussion. “These can be experts, for example,” says Algesheimer. They generally get involved fairly late in a debate and give the discussion a different, often new, direction by making convincing points. But so-called “social” commenters, who moderate what’s going on, also proved to be particularly influential. They often amplify the effects of other people’s comments by referencing them approvingly: “Great comment, thanks!”

What is the motivation behind leaving a comment? “Some people want to position themselves as experts to then build up a reputation online,” explains Algesheimer. “These are called influencers. They think in commercial terms, because they want to set up their own accounts or blogs, with lots of followers.” And they then also earn money through advertising. What came as a surprise is that the researchers were able to filter out and thus identify the influencers among all commenters by using an algorithm.

Loyalty at a cost

“We’re often unaware of how transparent we become once we leave traces on the web,” summarizes Algesheimer, referencing another research project that looks into consumer behavior. Everybody has experienced this: You’re looking for a new toothbrush, for example, and go online to find the right one. In the following days, it’s then hard to escape the banner ads depicting toothbrushes. The same also happens when people search things on Google. Google remembers what you’ve been searching and adapts the links that it offers to you accordingly. “This explains why search results for one and the same keyword can differ widely from one person to another,” explains Algesheimer, adding: “We’re being manipulated all the time.”

And it doesn’t stop there, as our purchases are no longer private either. If you have a supermarket loyalty card such as a Cumulus or a Coop card, then you also leave traces of your data on the companies’ servers. Companies are prohibited by law from passing on this information, and they are not allowed to combine data with data from other sources. But what happens when a company disregards this, or one of its employees shares confidential data?

According to Algesheimer, data combination in particular is a great danger. When a person’s shopping data is cleverly combined with their GPS data, health insurance data, and the traces they voluntarily leave online, this could become a problem. When it comes to buying supplementary health insurance, for example, a health insurance company might discover that we’ve been buying cigarettes and alcohol, that we regularly visit a building with a doctor’s practice in it, and that the keywords heart and cardiovascular disease show up in our online search history. With this kind of knowledge, a health insurer might take a close look at which supplementary insurance – if any – it wants to offer to its client.

“The legal situation regarding data abuse in Switzerland is fairly good. And yet we could still very quickly be overrun by the technological possibilities of data combination, for example when quantum computing becomes a reality,” says Algesheimer. This is why it’s so important to raise awareness of just how vulnerable our privacy has become.

The University Research Priority Program Social Networks was created with the aim of fostering research into social networks in companies and in society. In this program, Professor René Algesheimer and several research groups examine the relationships between social structures and economic behavior by focusing on complex, networked systems.

The interdisciplinary program focuses on the investigation of social networks from a modern management perspective that includes elements from economics, sociology, information technology, mathematics, and physics.

Switzerland’s first-ever national Digital Day takes place on 21 November 2017. UZH is also taking part. In a series of UZH Talks, 16 experts from a wide range of subject areas answer questions on the digital society, including professor of business administration René Algesheimer. You can find the full list of UZH events here.