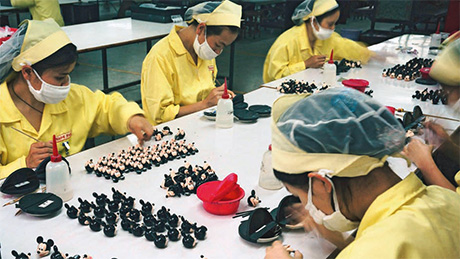 From toys and clothes to furniture, cheap Chinese imports have wiped out around two million jobs in the United States over the last 25 years. (Image: Michael Wolf, Keystone).

The tsunami came from the west, and hit the U.S. economy with full force. Cheap products from China since the country started competing in the global market a quarter century ago have cost the United States around two million jobs – permanently. “These jobs are gone for good,” says David Dorn, Professor of International Trade and Labor Markets at UZH, who is doing research into the impact of trade with China on the market and employment in the United States. His diagnosis makes bleak reading: “Products from China have made life difficult for companies in certain sectors of the American economy, or have forced them out of the market completely.”

The hardest hit have been businesses manufacturing primarily for the domestic market. “These products, for example clothes, toys and electronics, had been produced at low cost in the United States, and in many cases the quality wasn’t very high,” explains Dorn.

What’s interesting is that economic theory works on the assumption that trade is a good thing in itself because it generates specialization advantage, with manufacturers only making products they can produce as cheaply as possible. However, little attention has been paid to the way the gains and losses that can result from trade are distributed: while most consumers will benefit from cheaper products, some members of the workforce will end up losing their jobs or earning less.

“Economic models work on the assumption that money from the winners can be redistributed to the losers,” explains Dorn. Although in reality this happens to a certain extent, in the United States government transfer payments, for example unemployment and welfare benefits, aren’t enough to make up for the losses suffered by the losers. According to Dorn, “economic theorists have underestimated the costs of labor market adjustment. The shock created by imports from China was very sudden, so the labor market wasn’t able to absorb people who had been made redundant.”

The U.S. economy as a whole is also losing out, at least at the moment, because Chinese imports greatly exceed U.S. exports to China. Dorn anticipates continued growth in imports from China, resulting in even greater competitive pressure. The industries that are suffering the effects can expect little help from the government. Because of international trade agreements, it’s now virtually impossible to introduce measures such as tariffs to protect them.

This means that the employees who are affected have to try and seek work with other companies. Sooner or later the U.S. economy and workforce will adapt to the situation by investing and working in other industries. On the positive side, says Dorn, is the fact that the success of the Chinese export industry has given many people in China a way out of poverty. But this has come at the expense of the working people in America who have lost their jobs or are earning less.

Companies in certain areas of European industry – for example textile manufacturers in Italy and Spain – have also been hit hard by competition from China. Switzerland and Germany, on the other hand, aren’t feeling such serious effects, and thanks to their well positioned export industries are benefiting from access to the huge Chinese market and the new sales opportunities it offers.

Effects balancing each other out

The second area Dorn is looking into is the effects of new technology on the labor market. Here economists disagree as to whether automation and technology will make human labor superfluous. The results – mass unemployment and social unrest – would be catastrophic.

But Dorn’s analysis comes to a different conclusion. While technology is replacing jobs in certain areas, it’s creating employment elsewhere. On balance the two effects are more or less balancing each other out.

Labor market specialist Dorn explains it as follows: some jobs, such as assembly line work, or certain secretarial and accounting jobs, can be replaced by technology. On the other hand, new fields of work are being created in areas such as software development and programming. Added to this, the greater productivity made possible by machines is freeing up resources that can be funneled into consumption. “An example is the way textile manufacturing was mechanized in the wake of the Industrial Revolution,” says Dorn. “The textile industry got much more efficient, which resulted in cheaper clothing. This meant that people had more money to spend on other things such as more comfortable living arrangements and leisure.”

There is a catch, however: the new jobs that are being created aren’t in the same pay bracket as the ones being lost. Dorn is increasingly seeing a rift opening up. On the one hand there are plenty of new jobs for highly qualified people such as engineers, architects, and media workers who can work more efficiently thanks to the new technologies. “These are creative professions that are difficult to replace with technology, which in fact are actually benefiting from the technology.”

The same applies to jobs requiring a combination of visual perception, motor skills, and simple verbal communication, for example janitors, cleaning personnel, and restaurant waitstaff. “It’s very difficult for machines to do this type of work because it always varies slightly, and requires flexible behavior,” explains Dorn. While these jobs won’t be lost, they’re not particularly well paid.

The main pressure will be on mid-income jobs in areas such as accounting that involve clearly defined tasks that could also be performed by a computer. “It will mainly affect the middle classes,” says Dorn. So one result of this development will be even greater income inequality.

Dorn is convinced that this pattern of polarization will affect all highly developed industrial nations: the U.S., Western Europe, and wealthy Asian countries. In the mid-income segment the jobs with the best prospects will be those requiring communication skills, creativity, and decisionmaking ability. For Dorn this includes craftspeople making high-end products to individual customer specifications, or one-on-one coaches such as fitness trainers and personal shoppers.

Dorn also stresses that thanks to good vocational training, many skilled trades and professions in Switzerland are set up in such a way that they’d be difficult to replace with technology. “Anyone with problem-solving skills also has good prospects for the future.” For this reason, training should be geared to cultivating skills that can’t be replaced by a computer or robot.