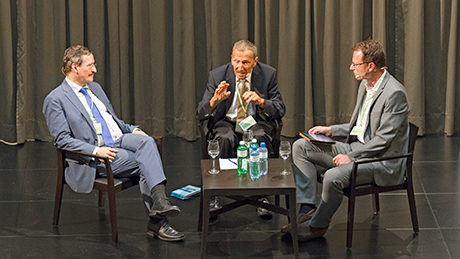 The entertaining and engaging discussion around outstanding research and Zurich as a base of academic excellence kicked off with Rolf Zinkernagel talking about his personal experience with the Nobel Prize. Host Beat Glogger, himself an alumnus of UZH, started by asking Zinkernagel straight out: How do you win a Nobel Prize?

The answer from the articulate immunologist, who researched and taught at UZH between 1979 and 2008 and won the Nobel Prize in Physiology and Medicine together with Peter Doherty in 1996, was dry: “You simply wait for the call from Stockholm.” He went on to add that it also requires a good education, a lot of hard work, a certain amount of intelligence – and most of all, luck.

Although UZH president Michael Hengartner hasn’t won a Nobel Prize himself, for several years he worked at the MIT lab of Robert Horvitz, who earned the Nobel Prize in 2002 for his research into the nematode worm C.elegans. “So at least I had a nose for a Nobel-prizewinning field of research,” grinned Hengartner.

He too emphasized the importance of hard work and luck. He explained that in terms of a successful career it was extraordinarily important to meet the right people at the right time. While that’s something you can’t control, to quote a fellow researcher, you can do much to make it possible: The more you work, the more happy coincidences you’ll experience.

This exchange launched the evening discussion held by Alumni UZH at Zurich City Hall at the end of June. In his welcome address to around 200 guests, Peter Isler, president of the alumni association, explained that the “How Do You Win the Nobel Prize” event was inspired by “Einstein & Co – Zürich und der Nobelpreis,” an impressive exhibition documenting the great potential of Zurich as a center of research that has produced many outstanding minds.

Afterwards the speakers talked about what constitutes outstanding research. Over the course of the evening Beat Glogger managed to draw a series of surprising parallels between the two scientists. For example the role of chance in their careers: Michael Hengartner had originally wanted to study physics, but the chance reading of the book What is Life inspired his fascination for molecular biology.

Rolf Zinkernagel’s career also took some unexpected turns. He originally felt a call to be a surgeon, but an ongoing training course in experimental medicine at UZH prompted him to get into pure research in biomedicine. Chance also played a key role in his prizewinning experiments: The researchers only got on the right track because their lab results didn’t match their expectations. Their discoveries ultimately formed the basis of our understanding of the cellular defense mechanisms for dealing with virus-infected cells.

“We paid attention, and asked the right questions in response to unexpected observations,” explained Zinkernagel. This is a quality also emphasized by Michael Hengartner: “As a researcher you can’t afford to stick to a hypothesis if the experimental facts don’t match.” On the contrary, good science means looking for alternative explanations for unexpected results. 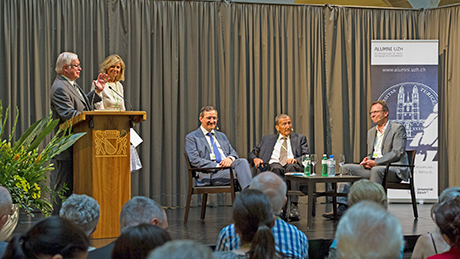 Another thing the two speakers had in common was their international experience. Michael Hengartner was born in St. Gallen, but grew up in Quebec, Canada, where he also began his studies. His journeyman years as a scientist took him to several U.S. universities, and then to the University of Zurich, where he was appointed Professor of Molecular Biology in 2001. After studies in Zurich and Lausanne, Rolf Zinkernagel did research in Canberra, Australia.

Both stressed the importance of international experience. “Living and studying abroad is extremely beneficial,” said Hengartner. Zinkernagel, who made the move to Australia with a young family, also pointed out that it requires a willingness to take risks.

This was followed by a short discursion on the subject of the mass immigration initiative and the problems it’s causing for universities because of the way it limits freedom of movement, an important factor given the international nature of research. President Hengartner said it was clear that the EU must remain an important partner. Nobel laureate Zinkernagel concurred: “A liberal recruitment process works to our benefit.”

Then came the question of the evening: How do you encourage and support creativity to ensure that Zurich continues to produce work worthy of a Nobel Prize? For Michael Hengartner this means an obligation to attract the best people to Zurich to foster the kind of creative environment that’s vital for outstanding research. With his customary dryness Rolf Zinkernagel added: “You also need money.”

This heralded some closing remarks on funding. Both speakers agreed that the funding provided by the canton gave the University of Zurich a solid foundation, enabling it to provide a basic offering and maintain broad diversity at UZH and its seven faculties. But outstanding achievement, in other words unusual, risky research and experimentation – what Rolf Zinkernagel describes as “Saturday morning experiments” because they take place outside the mainstream and can go wrong – requires additional resources. Alongside the Swiss National Science Fund and foundations, the private sector is a potential source of extra funding – although the university has to ensure it maintains its independence.

The discussion ended with the recognition that while you can’t plan Nobel Prizes, you can increase the likelihood of pioneering discoveries by creating a stimulating environment.