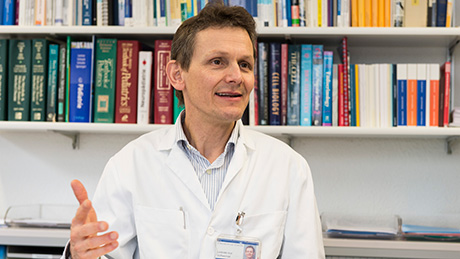 Even though there’s often only a minor genetic defect, the search for the right therapy can be complicated. Matthias Baumgartner heads the clinical research priority program for rare diseases.

There are around half a million people in Switzerland suffering from rare diseases. A disease is deemed to be rare if it affects fewer than five in 10,000 people, causes a lasting disability or is life-threatening. Most rare diseases, however, affect only one in 100,000 people or even fewer.

And yet these “rare” diseases aren’t rare at all: On average, five new rare diseases a week are described for the first time in a medical journal. “New genetic defects that can cause rare diseases are constantly being discovered,” explains metabolic disease specialist Professor Matthias Baumgartner at UZH. He heads the Rare Disease Initiative Zurich (radiz) clinical research priority program, established in 2012.

Rare diseases are generally due to a genetic defect, so symptoms often emerge as early as infancy or childhood. Take the example of Julia*. Julia, now age seven and one of Baumgartner’s patients, has a rare metabolic disease called methylmalonic acidemia (MMA), which means her body doesn’t break down amino acids properly. It leads to life-threatening deficiencies. The body also produces substances that effectively poison Julia from the inside.

Odyssey from doctor to doctor

The 21,000 or so human genes are sensitive, so any defects don’t necessarily have to be serious to cause a great deal of suffering in certain circumstances. Many people with rare diseases spend years going from one doctor to another until someone finally makes the right diagnosis. It’s even worse for patients with one of those baffling, as yet unknown conditions that still have no name.

A rare disease often means a dramatic odyssey from one medical establishment to the next for the families and their children. Julia’s condition wasn’t recognized until she was a year and a half old. Prior to that the family physician had wrongly assumed she had an intolerance to cow’s milk.

But her wooziness and vomiting turned out to have a very different cause: Endogenous toxins were attacking her body and brain. Finally doctors realized that she was suffering from methylmalonic acidemia (MMA). As a result of the disease, Julia was no longer able to walk, and her development was impaired. Children used to die from this condition. “Now we know that patients have a good chance of survival if they keep to a strict low-protein diet their whole life long,” explains Baumgartner. But the body continues to produce toxins, which slowly destroy the kidney.

It’s still not known why this damage occurs to the kidney in particular, and what could be done to protect it. “For this reason we clinical practitioners rely on intensive collaboration with basic researchers,” says Baumgartner, pointing to his close partnership with UZH renal physiologist Professor Olivier Devuyst. The two physicians hope that together they’ll eventually be able to help patients like Julia.

Baumgartner says research into rare diseases is fascinating, and constitutes a major academic challenge because it leads to completely unknown realms of medicine. Insights in this field could give a huge boost to other areas of medicine. This has been the case, for example, with a rare enzyme defect that was recently shown to lead to symptoms of poisoning in the peripheral nerves. Interestingly for researchers, says Baumgartner, patients with type 2 diabetes (a disease that occurs frequently) display the same symptoms of poisoning. He’s become a strong proponent of research into rare diseases, an area that’s still often seen as a poor relation in the world of medicine. In addition to researchers and clinicians, Baumgartner would like to encourage young academics to take an interest in the field.

Baumgartner is using the resources that have come with recognition of this work as a clinical research priority program for a variety of purposes. He’s moving ahead with research at the University Children’s Hospital, University Hospital Zurich, and UZH, where various PhD students and clinician-scientists are working on a range of research modules. He’s also trying to encourage clinicians and basic researchers to investigate rare diseases. For this reason, since 2013 radiz has been holding a summer school.

In general, however, funding for research into rare diseases tends to be scarce. The pharmaceuticals industry shows only sporadic interest. Added to this is a lack of model organisms, diagnostic standards, and effective treatment options, plus the fact that case histories are available on only a fragmentary basis. The Swiss Federal Office of Public Health has recognized these shortcomings, and in September 2014 approved a national initiative on rare diseases.

null radiz: Rare Disease Initiative Zurich nullBased at the Children’s Research Center at Children’s Hospital Zurich, the aim of the Rare Disease Initiative Zurich (radiz) is to do interdisciplinary translational research to better understand rare diseases, and thus improve the lives of those affected in the long term. It also aims to bundle the existing know-how of clinicians and researchers and provide a platform for interdisciplinary networking. nullRadiz is providing valuable input in the creation of reference centers under the Federal Office of Public Health’s national rare disease initiative. These centers will give patients access to high-quality diagnostic procedures and treatments throughout the course of the disease, particularly during the transition from children’s to adult medicine. They could also provide patients with concrete support with administrative matters. nullAt the beginning of July, Matthias Baumgartner and his team are holding a summer schoolfor junior researchers in Zurich under the auspices of the Rare Disease Initiative Zurich (radiz) clinical research priority program. (This year’s summer school is already fully booked.) The next summer school is planned for summer 2016. nullnullnull