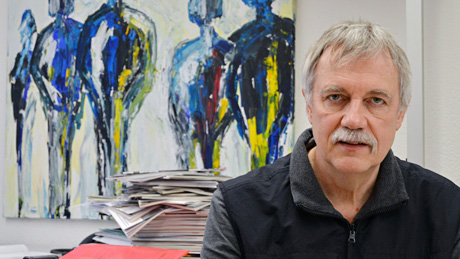 "Proteins are the molecular players in cells, not genes,” says Ruedi Aebersold, professor at ETH and the University of Zurich. (Image: Fabio Bergamin / ETH Zurich)

In future, medical researchers would like to better understand the individual differences among patients and the various manifestations of a disease in order to provide customised therapies. Until now, they have used mainly genomic differences; that is, mutations in the genetic material or DNA. Professor Aebersold, you are now going one step further and would like to entrench personalised medicine at the level of proteins. Why?

Ruedi Aebersold: The molecular players that are the immediate cause of a disease in a body or a cell, are mostly proteins. Pathologists have long been able to measure specific proteins in tissue samples when they diagnose diseases; for example, a type of cancer. They can make these proteins visible with antibodies through the use of widely accepted, conventional methods. However, this identifies only a handful of proteins at a time. In recent years, we have developed a proteomics method by which we can precisely and simultaneously identify 2,000 proteins in a minute tissue sample.

However, such methods to identify protein patterns are far more complex than existing genome analysis.

It’s true that genetic mutations can now be identified quickly and relatively inexpensively. However, in cells the genetic information is processed; the proteins are at the end of the biological process chain and are more meaningful when describing a disease. By identifying thousands of proteins in tissue samples, we want to bridge the gap between genomics and diseases. Often a number of different genetic mutations lead to the same disease, or a disease is so complex with so many genetic puzzle pieces, of which we know very little about.

Our proteomics method gives pathologists a modern tool with which they can classify diseased tissue far more precisely than before. We have developed proteomics to such an extent that we can deliver very precise and reproducible results in just one day.

How do you achieve this?

In order to identify proteins in a sample, we break them down into fragments called peptides. Using mass spectrometry, we can differentiate these peptides according to their mass and their ability to repel water. We assume that there are 10 to 100 million different peptides that may arise from the different proteins in the human body, which is far too many to analyse in a short time.

Many previous proteomics methods therefore used a trick: according to the Las Vegas principle, they randomly chose approximately every 1000th peptide and analysed it. But this method has the big disadvantage the data generated are poorly reproducible because the same peptides are not chosen each time the same sample is analyzed. We, on the other hand, reduce the size of the data in a different way: we divide the peptides according to their mass and ability to repel water into about 30,000 groups and analyse them within an hour. Chance plays no part in our method and our technique is therefore both reproducible and fast.

Over the last two years, you have refined the method and recently used it on patient tissue samples for the first time. To what effect?

In our latest study, we measured the biochemical state of small biopsies, specifically kidney cancer biopsies, that we received from co-autors of the study, physicians at the Kantonspital St. Gallen. We were able to reproduce the pathologist’s findings at the protein level extremely well. Our technique enables us to create digital protein fingerprints of the samples. The advantage is that these fingerprints can be re-analysed at a later date, which means that researchers can use our data years later if they are interested in the function of a specific protein.

Why is the speed of the method important?

Proteomics allow us to make new discoveries best when we statistically analyse data from a large number of people, called a cohort. If a method is fast, then it has the capacity to examine large cohorts.

You lead a research group of systems biologists. How have doctors at hospitals responded to your new method?

We have received positive feedback from clinical researchers, and we anticipate that pathologists will soon be using the method to make clinical decisions. Proteomics used to have a bad reputation among physicians because it was comparatively expensive and complex, and it suffered from the Las Vegas syndrome, the poor reproducibility.

We have now corrected this and are therefore convinced that our method has huge potential in clinics. We submitted our latest research to a medical journal for publication rather than a biological journal in the hope that it will make physicians and medical researchers more aware of the benefits of our technique. We are also pleased that our method not only works on our equipment; researchers have already adapted it for other equipment.

How will you further develop the method?

We are constantly working on increasing the number of measurable proteins. We also want to develop the method in such a way that we can measure older tissue samples that have been conserved in formalin. We could then analyse stored samples from patients about whom the subsequent course of disease and the chosen therapy is known. This would allow us to detect correlations between protein patterns and the course of the disease.

We are very well positioned in Switzerland to explore complex diseases with a systems approach, in part thanks to the well-developed systems biology research in this country. And a centre of personalised medicine already exists through “Hochschulmedizin Zürich”. But more incentives are needed in order for physicians, researchers and engineers to work together more effectively.

nullnullRuedi Aebersold (60) is a pioneer in proteomics and systems biology. The journal Analytical Scientist described him in 2013 as the world’s second-most influential scientist in analytical sciences. After graduating from the University of Basel, Aebersold held positions at the California Institute of Technology and the University of Washington. He has been a professor of Systems Biology at ETH Zurich and University of Zurich since 2000/01. null