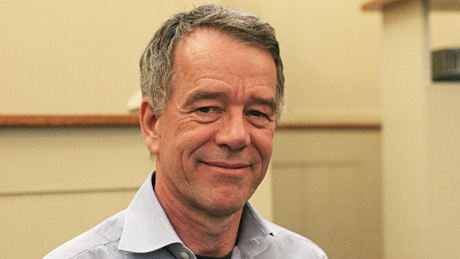 “There are grounds for believing that someday we’ll be able to cure the disease”, says Roland Martin, Co-Director of the Clinical Research Priority Program on Multiple Sclerosis. (Image: Adrian Ritter)

Visual disorders, muscle cramps, paralysis, and cognitive impairment are just some of the symptoms that can affect people suffering from multiple sclerosis (MS). Immune cells trigger inflammation of the brain and spinal cord, and attack the myelin sheaths that insulate the nerve fibers. This disrupts the transmission of signals between the nerves.

The researchers intend to approach treatment from three angles. Firstly, they intend to apply new active agents to curb inflammation in the brain. Secondly, they want to use a new therapeutic approach to make the immune system less aggressive; the idea is to make immune cells tolerant again to the tissues of the patient’s body (tolerization).

The third approach will involve developing so-called neuroprotectors, active agents that protect the insulating sheath and the neurons themselves from damage by immune cells, or even enable the myelin to regenerate.

“There are grounds for believing that someday we’ll be able to cure the disease,” says Roland Martin. He hopes that the research done under the CRPP will be a significant contribution.

The idea is to make new insights from this work available to patients as quickly as possible. Soon the University of Zurich intends to bundle treatment and diagnosis and develop them further at a special MS center.

nullMultiple Sclerosis is one of eleven Clinical Research Priority Programsset up by the Faculty of Medicine at UZH to promote strategically important areas of research. If the appraisal three years into the program is positive, a CRPP can be continued until 2021.  null