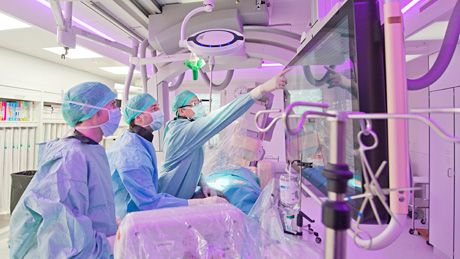 Heart attack or broken heart? The examination at the heart cath lab at the University Hospital Zurich resolves this question. (Image: Ursula Meisser)

A 68-year-old woman is sent to University Hospital Zurich in an ambulance by her family physician. She’s suffering from serious chest pains and shortness of breath. The ECG and lab tests reveal changes pointing to a heart attack, but cardiac catheterization shows that all her coronary vessels are open. “This rules out a heart attack, myocardial infarction. In this case we’d be seeing a closing or narrowing of the blood vessels at at least one point,” explains Thomas Lüscher, Professor and Chairman of Cardiology at University Hospital Zurich and Director of Cardiovascular Research at the University of Zurich.

Even so, the cardiac catheterization test does reveal something striking: The apex of the left ventricle has ballooned up, narrowing towards the top, and the heart is no longer pumping properly. “The patient presents a typical picture of so-called takotsubo cardiomyopathy,” says Lüscher.

Japanese scientists first described the phenomenon in 1990, naming it for the ventricle’s resemblance to a “takotsubo,” a type of round clay pot with a narrow neck used in Japan to catch octopus. There was no plausible explanation for the condition. It soon became clear that takotsubo cardiomyopathy occurs all over the world, albeit a lot less frequently than acute myocardial infarction (heart attacks). So far, cardiac catheterization has been the only way of correctly diagnosing the two disorders.

To try and get to the bottom of the takotsubo cardiomyopathy mystery, since 2011 University Hospital Zurich has been running the world’s biggest database containing information on patients suffering from the condition.

Interestingly, 90% of the people contracting the disorder are postmenopausal women. In most cases those affected are aged between 60 and 75, and have recently suffered extraordinary emotional stress. For this reason the condition is also commonly referred to as stress cardiomyopathy or broken heart syndrome.

In the first few hours, broken heart syndrome and heart attacks are equally dangerous, and can lead to life-threatening complications. The differences emerge after the acute phase. In most cases of broken heart syndrome – unlike myocardial infarction – the heart recovers completely within a few days or weeks.

But why does the heart muscle enter this state of being stunned when the blood vessels are open? What’s clear is that the body produces excess amounts of certain hormones in response to stress. Emotions, and the way they’re processed by the brain, appear to have a major effect on the heart. Thomas Lüscher and Christian Templin have now come to the conclusion that takotsubo syndrome is a neurological condition. For this reason, around a year ago they went into collaboration with Lutz Jäncke, Professor of Neuropsychology at the University of Zurich.

“We were able to use MRI scans to show that takotsubo patients displayed massive anatomical abnormalities in the region of the brain associated with the control of emotions. This means they’re no longer able to efficiently process messages from the periphery, and stress impulses to the heart are disrupted.”

In the meantime similar abnormalities have also been identified in patients with depression and anxiety disorders. So far it’s unclear whether there will ever be therapies to treat changes of this sort in the structure of the brain. “Twenty years ago the answer would have been a clear no, but over the last decade we’ve found that it really is possible to bring about changes in the structures of the brain, for example with meditation,” explains Lutz Jäncke.