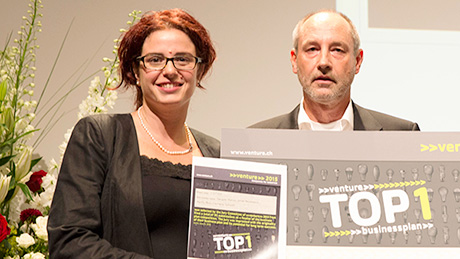 Biologist Daniela Marino is thrilled. She’s won the coveted first prize in “venture,” the nationwide Swiss startup competition. Italian-born Marino has been working as a researcher at the University Children’s Hospital Zurich since 2009. In collaboration with Tissue Biology Research Unit director Ernst Reichmann and his team, Professor Martin Meuli, Director of the Department of Pediatric Surgery, and Clemens Schiestl, Director of the Pediatric Burn Center, she has developed an artificial skin graft that can be used to treat burns and skin disorders.

The bioengineered skin isn’t yet ready for market. But clinical phase I trials have been running for a year, and phases II and III, to be conducted together with the Swiss Center for Regenerative Medicine and Clinical Trials Center, will follow shortly. Experience with grafts on children so far is giving the researchers grounds for optimism: The method has already been used to operate on eight young patients at the University Children’s Hospital Zurich.

From pure research to market

“It was just the right moment to start thinking about the business side of things,” explains Daniela Marino. In creating the startup company, she’s making the daring leap from researcher to entrepreneur. She came up with the name “Cutiss” one weekend. “‘Cutis’ is Latin for skin. With the extra ‘s’ it’s reminiscent of the word ‘tissue.’” The path from research to marketable product is long, says Marino, which is why it’s so important to think about the business aspects – especially given that the skin they’ve developed in Zurich is very versatile and unique anywhere in the world.

Demand for skin grafts is enormous. Each year, millions of people suffer serious burns. Third-degree burns damage the skin so badly that it can no longer regenerate itself. If this happens, doctors have to transplant skin from other, undamaged parts of the body. With the new method it’s possible to graft artificial skin made from the patient’s own skin cells. Even though this bioengineered skin has no sweat glands or follicles, it’s a blessing for many burn victims. So far there has been no comparable substitute skin on the market. But it’ll be some time before market maturity.

Daniela Marino’s first prize in the “venture” competition came with CHF 60,000. She’s delighted, although she does put the figure in perspective by pointing out that research funding of at least CHF 12 million has already gone into the startup. The children’s hospital has been doing research into lab-grown skin for the last 14 years. The research is funded by the University of Zurich, the EU, and the Gaydoul Foundation. If the new company is a success, revenues will flow back to the University and the children’s hospital.