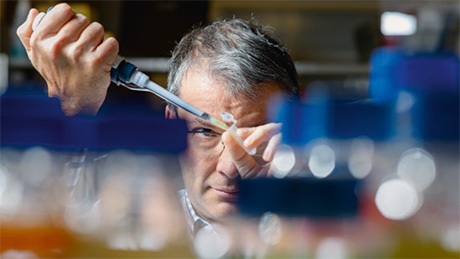 Physicians at the Anderson Cancer Center in Houston, Texas, could hardly believe their eyes and ears: A week previously they had injected cancer patient John Baker* with cancer drug Xilonix. Until that point Baker had been seriously ill, emaciated, and confined to bed. Now he turned up claiming to be cured.

The doctors had their doubts, and duly examined him. They found that the tumor was still there. Even so, Baker felt much better. This is no isolated phenomenon: Seriously ill people treated with Xilonix have been able to leave their beds, start eating again, and go to work. And they’re living much longer than expected.

“Doctors weren’t able to explain it,” says Thomas Kündig, a dermatologist at University Hospital Zurich who teaches at UZH, “until someone realized that rather than targeting the tumor, the drug was primarily treating the cachexia, the wasting of the body that accompanies cancer.”

Cancer leads to general illness, loss of appetite, and depression. “Generally patients die from the cachexia rather than from the tumor itself,” explains Kündig. “Apple founder Steve Jobs is a good example.”

Patients treated with Xilonix not only feel better, but their bodies also get stronger again. “Within eight weeks their muscle mass had increased around ten percent,” says Kündig. “Given that cancer patients normally suffer a steady loss of muscle mass, this is something we’ve never seen before.” Thomas Kündig is following the clinical studies in Texas closely, as Xilonix is based among other things on his research.

Kündig’s work involved investigating what happens when the secretion of interleukin 1alpha is inhibited. Interleukin 1alpha is a messenger that is secreted when there is an immune response in the body, for example when the immune system is mobilized against cancer cells. While this immune response is vitally important for us because it protects the body from infection by attacking viruses, bacteria, and other foreign bodies, it can also have a downside.

In the case of cancer this even happens frequently. Tumors lead to inflammation. “For a long time the strong inflammatory reactions induced by tumors were viewed as something positive,” explains Thomas Kündig. “They were thought to be a sign that the immune system was fighting the cancer.” But now it’s becoming increasingly clear that this inflammation is more of a help than a hindrance to the tumor, because the inflammation leads to the creation of new blood vessels that supply the tumor with the large amounts of energy it needs. The inflammation also destroys surrounding tissue and bone, enabling the cancer to grow and spread.

So Kündig’s aim was to neutralize interleukin 1alpha. He was helped by the fact that a Danish research group had found an anti-interleukin antibody in healthy humans and had been able to clone it.

Now an American biotech firm, XBiotech, has advanced an anti-interleukin-1alpha antibody to the clinical development stage. The drug is called Xilonix. After successful preliminary studies on mice and rats, Xilonix was used on an initial group of cancer patients, including John Baker, in Houston. A total of 30 patients were treated.

As related above, the trials were astonishingly successful. Officials at the FDA, the US drug licensing authority, were so impressed by the initial results that they approved fast track designation for clinical trials of Xilonix. This means that fewer patients have to be included in the trials, and review processes are considerably shorter. “The FDA has recognized that this drug is a new way of helping seriously ill people,” says Kündig. “At the moment nothing else like it exists.”

This is particularly true given the way that unlike conventional chemotherapy, which often leads to a massive deterioration in quality of life, Xilonix boosts patients’ well-being in addition to tackling the tumor itself.

Considering the serious side-effects, many patients with cancer at an advanced state elect not to have therapy or to discontinue it. This means Xilonix has the potential to revolutionize the treatment of cancer: Instead of having to choose between therapy and quality of life, patients could opt for therapy that actually improves their quality of life.