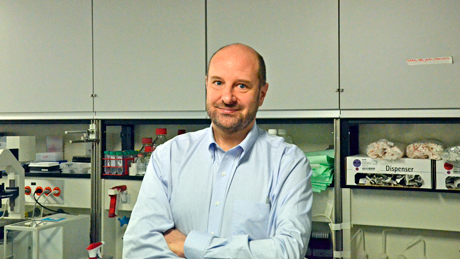 When geneticists discovered the key role played by small RNA molecules a few years ago, Adriano Aguzzi immediately realized that they would be useful in research into prion diseases. These molecules, related to the DNA that makes up the genetic material, coordinate the effects of genes, and regulate the network of proteins within cells. These cellular processes are of particular interest in the case of prions, which for three decades have been the object of the research done by the Zurich scientist, who is Professor of Neuropathology at the University Hospital.

These prions, as terrifying as they are astonishing, trigger neurodegenerative disorders such as Creutzfeldt-Jakob disease in humans, BSE (mad cow disease), and scrapie in sheep. What all these fatal diseases have in common is their pathogenesis: Healthy prion proteins in the brain degenerate into a disease-causing form, and destroy the central nervous system in a slow process over years.

Prion specialist Aguzzi saw that small RNA molecules provided opportunities to gain a deeper understanding of these diseases. He and his colleagues are taking this further in a clinical research priority program (CRPP) called “Small RNAs in pathogenesis, diagnosis and therapy of human diseases.” “We’re providing a technological platform enabling different clinical disciplines to use RNA technologies to gain new insights into disease,” explains Aguzzi.

Thousands of measurements a day

This technological platform takes the form of an industrial robot, a good four meters long, on the ground floor of the Institute of Neuropathology at University Hospital Zurich. It’s an imposing piece of equipment that conducts automated experiments in series on tiny quantities of cells and RNA molecules. In full operation the robot registers around 17,000 measurements a day, providing information on the influence of the 30,000 human genes on the production of specific proteins, for example prions. “We’re doing high-throughput screening at the highest technological level,” explains Aguzzi on our visit to the workstation.

In the case of prion diseases these RNA studies are an opportunity to identify the genetic networks that are involved in the disease process. “We know just about everything about the function and role of prions,” says Aguzzi. But he goes on to explain that little is known about the cellular processes that give rise to the infectious form of the protein. So far, for example, it hasn’t been possible to convert healthy prions into their disease-causing counterparts in the test tube. Aguzzi would like to crack what he calls this “final puzzle.”

More diseases through the lens of RNA

The principle of genome analysis on the basis of small RNA molecules isn’t restricted to prion diseases. The technology can be used to turn off each gene in a cell and investigate the effects on a chosen biochemical network – provided an analytic procedure, a so-called assay, exists. This makes the technology interesting for other diseases that are being investigated as part of the clinical research priority program. For example the research team around Jan Krützfeldt, Professor of Endocrinology and Diabetes at the University Hospital, is examining the development of insulin resistance in muscles and the role of mitochondria, in which the biochemical energy for muscle movement is generated.

Neuroscientist Magdalini Polymenidou, Assistant Professor at the Institute of Molecular Life Sciences at UZH, is using small RNAs to investigate neurodegenerative disorders such as amyotrophic lateral sclerosis (ALS) and frontotemporal lobar degeneration (FTLD). These projects also aim to identify hitherto unknown molecules that play a key role in disease processes. Markus Stoffel, the professor who heads the Institute for Molecular Health Sciences at ETH Zurich, is investigating the effects of regulating RNA molecules on the metabolism of beta-cells in the pancreas that produce the hormone insulin. The researchers are particularly interested in the processes that lead to the emergence of tumors in these cells. RNA molecules are involved in the generation of tumors.

Another research robot on its way

Adriano Aguzzi is excited about the new possibilities opened up by RNA technologies. Thanks to constant refinement, the technology can be used to do experiments with smaller and smaller quantities – even with nanoliters – and in series. The CCRP has shown that there’s plenty of demand for these capabilities. “The technology platform is running at full capacity, day and night,” says Aguzzi. So it’s no surprise that the University Hospital wants to acquire another piece of high-tech equipment, also to be used to study RNA interference.