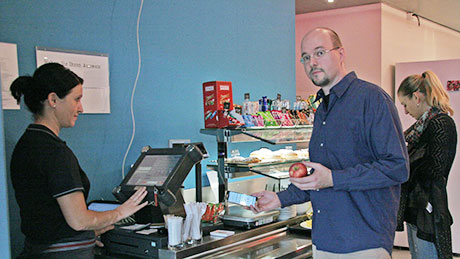 Since the beginning of September, UZH staff and students have been able to use virtual money to buy real fries or a grilled sausage and a hash brown in the cafeteria on Binzmühlestrasse on UZH’s Oerlikon Campus. They pay by mobile phone using a currency which, for a long time, was seen as the crazy idea of computer nerds. But today, virtual money is being used on a growing scale.

Bitcoin was developed by computer experts in 2009, and it has since evolved into a global payment system using virtual money. Security is guaranteed through cryptographic techniques. All transactions take place directly between the participants, but are stored anonymously on the Internet – a system that bypasses both the customary intermediate steps and the financial authorities involved in conventional bank transactions.

The IT students are based at UZH’s Oerlikon Campus along with the chair of Professor Burkhard Stiller. Prof. Stiller, his senior assistant, Thomas Bocek, Christian Remy from the People and Computing Lab, and three students in the Master’s degree program were in the entrance foyer on opening day to explain how to use the bitcoin vending machines provided by the company SBEX that are used to charge mobile phones with bitcoins. The team then leads the way to the cafeteria.

Thomas Bocek shows just how easy a purchase is. Picking up an apple, he swipes his mobile phone in front of a payment station at the cash desk. The amount to be deducted is shown on the display and, after Bocek accepts the amount, the transaction is complete. This is technically feasible thanks to what are known as Near Field Communications (NFC), which enable two devices in close proximity to communicate with each other.

Bocek demonstrates that this technology also works with two mobile phones. For instance, if he wants to transfer bitcoins from his mobile phone to his colleague’s, all the two parties have to do is hold their phones close enough together, and the bitcoins switch to a new owner. And it works even when one of the phones doesn’t have an Internet connection. The name of the new program says it all: «CoinBlesk-System». Coins are sent to and fro at lightning speed – and «Blesk» is Czech for lightning. 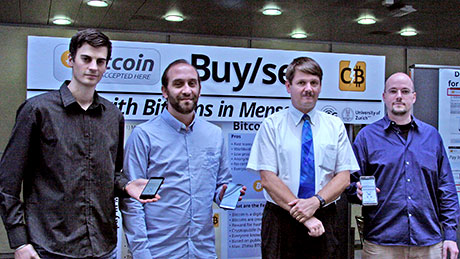 The CoinBlesk app was programmed by three students in Professor Stiller’s group. The objective was to facilitate split-second transactions.

The students are convinced that the system has a future because, in the long term, devices will communicate more and more with each other and because the technology required for such communication is particularly relevant for money transactions. To realize their system, each student worked on a key component: Simon Kaeser designed the app interface, Jeton Memeti created the communication interfaces and data transfer system, and Mehmet Ali Bekooglu is currently working on enhancing the server software. The University’s in-house server stores the transactions locally (off-chain) and handles the bitcoin money.

If you ask the developers why they are working with bitcoin currency, they stress the advantages: Anyone can use it, there is no central control as with a bank, there are scarcely any fees, it is anonymous, and it is viable on a global level. Bocek, however, believes this anonymity could pose difficulties.

Recently, there has been a lot of debate about bitcoin mainly because of the enormous price fluctuations. On its introduction in 2008, a Bitcoin cost just 6 US cents, but by the end of 2013, its value swelled to over 1,000 US dollars. Because of the currency issues, the cafeteria had to negotiate with the project coordinators to ensure that spent bitcoins are booked in Swiss francs.

But whether its bitcoins or another currency – the development of technology for conducting financial transactions between two parties is very much in vogue.