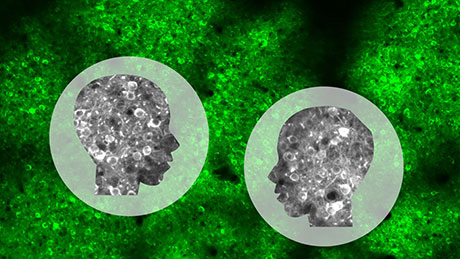 How do nerve cells communicate? This montage shows microscopic images of dyed neuron populations in the mouse’s neocortex. The dark points and shadowy areas are the shadows of blood vessels. (Montage zVg)

Scientists worldwide are working hard to understand the brain: They want to find out how sensory stimuli are registered, and how signals are transmitted and processed. The hope is that this will help explain diseases of the brain.

That is why major projects such as the US BRAIN Initiative  are increasing their investment in brain research. On Tuesday, the renowned US National Institute of Health (NIH) announced the first projects to be supported by the BRAIN Initiative. They include a project headed by neuroscientist Fritjof Helmchen at the University of Zurich’s Brain Research Institute, which has been awarded funding of USD 750,000 for the next three years. «This is a huge opportunity for us,» Helmchen says enthusiastically. The reason his project has been granted funding is because the new microscopes developed by his team will enable patterns of activity in the living brain to be recorded more effectively.

Scientists are taking different routes to investigating the processes that take place in the brain. Some have gone down the path of macroscopy, for example, by using imaging techniques in an attempt to investigate specific regions of the brain and the way they are connected to patterns of behavior. A drawback to these approaches, however, is that they cannot be used to make individual nerve cells visible. 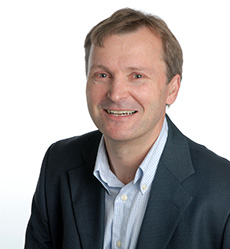 Delighted by the announcement of a USD 750,000 award from the US BRAIN Initiative: neuroscientist Fritjof Helmchen.


Others researchers, including Fritjof Helmchen, are working with microscopy. This involves using high-resolution functional imaging to track the flow of signals in the cellular networks of a small section of the brain. In the future, scientists aim to fully understand the way signals are processed in the brain, especially in humans. «There’s still a gap between macroscopic and microscopic approaches,» explains Helmchen. «To close this gap, we’re going to need new methods to be able to observe larger regions on a microscopic level as well.»

Helmchen’s team has already taken a step in this direction with the development of a new microscope that extends so-called two-photon laser scanning microscope technology. This prototype, which splits a single laser beam into two and then routes them back through a lens, enables scientists to observe different regions of the brain and investigate how they communicate. The microscope records patterns of cellular activity in these brain regions as a film, like a video. Special software is then used to analyze the data.

From whiskers to brain cells

To perform complex actions, humans and animals need stimuli, and these signals have to be transmitted and processed in the brain to trigger meaningful responses. This is possible thanks to a fine and widely ramified network of neurons, via which millions of individual signals are transmitted to the right part of the brain within a very short space of time.

But how precisely does this work? Helmchen’s research group uses mice, which pick up many tactile stimuli through their whiskers. The researchers harness this faculty by teaching the animals to distinguish between different kinds of sandpaper. If the mouse discriminates correctly, it gets a reward. Processing the tactile stimulus, performing an action (right or wrong), and the learning process itself all lead to different patterns of activity in the neuronal networks, which the scientists can visualize with the help of fluorescent indicators and the two-photon microscope. The aim of their research is to track the signal paths in the neocortex when mice are solving a relevant behavioral task and to identify the nerve cells involved in the process.

Observing the same cells over a long period

Helmchen and his team want to use the new microscope, whose development is now being supported by the NIH, to investigate these signal paths and the role of specific regions of the brain even more closely. The goal is to further optimize and extend the prototype microscope to enable four or more regions of the brain to be observed simultaneously. This could also make learning processes visible.

«We’re able to record the activity of the same cells over a period of weeks. And by doing so, we hope to shed light on the secret of learning. Maybe we’ll find out how activity in the cells that communicate between specific regions of the brain changes in the process of learning,» explains Helmchen.