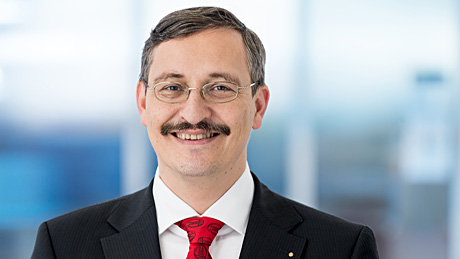 «I will do everything in my power to make it clear to politicians just how much is currently at stake for Switzerland’s research institutions.» Michael Hengartner, President of UZH.

UZH News: How did you react to the yes-vote on the immigration initiative?

Michael Hengartner: I’d have preferred a different outcome myself, but naturally I accept the people’s decision. Scholarship depends on international exchange, and Swiss universities now need to ensure that Switzerland’s research and education institutions are effected as little as possible when the initiative is implemented.

How much is at stake for Switzerland’s research landscape? Are Swiss universities at risk of being isolated?

The legal situation is up in the air right now. But, although I believe isolation is highly unlikely, even smaller restrictions in the exchange with EU nations would hurt us.

As a consequence of the yes-vote, the Federal Council has halted ratification of the agreement with Croatia on the free movement of persons. The EU immediately responded by suspending negotiations with Switzerland on the multi-billion euro research agreement Horizon 2020 until further notice. What does this imply for Swiss universities?

Horizon 2020 is the largest European innovation and research program, valued at 80 billion euro. Swiss researchers, too, have high hopes riding on this program. If our status as associate member of Horizon 2020 were to be denied definitively – which I doubt will happen – it would no longer be as easy for our researchers to take part in European projects as equal partners. Until now, researchers in Switzerland have been very successful in attracting competitive European research projects, which in turn has enhanced the international reputation of UZH and other Swiss universities.

Does UZH have resources to influence the negotiations?

Not directly, no. But I will do everything in my power to make it clear to politicians just how much is currently at stake for Switzerland’s research institutions. Swiss universities benefit hugely from the EU’s research programs: So far, Switzerland has received more money from the EU in the research sector than it has paid in. It should be in the interests of the entire Swiss population not to weaken our universities.

What happens if the flow of research funds from the EU into Switzerland stops?

If Switzerland’s participation in Horizon 2020 fails once and for all, Switzerland would probably revert to the system we had until 2004: The funds currently set aside for the EU program would be distributed within Switzerland.

What impact would our exclusion from the student exchange program Erasmus+ have?

The exchange program Erasmus+ enables Swiss students to remain registered at their home university during an exchange abroad, which means that they can continue to pay the comparatively low student fees in Switzerland – a good thing. I’m confident that we will be able to guarantee access to European universities for our students. Levelheaded discussions with EU representatives could still change the present stance in Brussels – or so I hope.

What is your advice to UZH researchers looking to apply for EU funding?

To not throw in the towel and to continue applying for funding. Although Switzerland’s participation in Horizon 2020 and Erasmus+ has been suspended, it isn’t completely off the table. A lot could change in the coming months. I have great faith in the negotiating skills of Swiss diplomacy.

Are you concerned that highly qualified instructors and researchers will stop applying to Swiss universities?

We definitely need to take action there. I would like to send out a clear signal that scholars from all over the world are welcome at UZH. For 180 years, the University of Zurich has been attracting the best researchers and students. Our international character is a cornerstone of our excellence in research and teaching. We plan to continue this successful tradition within the legal framework and to offer the entire UZH community ideal conditions to study and conduct research.

Announcement from the Swiss State Secretariat for Education, Research and Innovation (SERI) According to SERI, the Swiss Confederation is working with the EU to find a solution by September 2014 that will enable researchers in Switzerland to take part in Horizon 2020. A solution for individual projects should also be part of the agreement. The first agreements for research projects by consortiums are expected to be signed in September. By June 2014, the Confederation plans to have reached an agreement with the EU that enables students to participate in Erasmus+.