These are the sort of questions that UZH translator Mary Carozza deals with when compiling terminology. «It is extremely nit-picky work», according to the American who works in the University’s Communications Department. 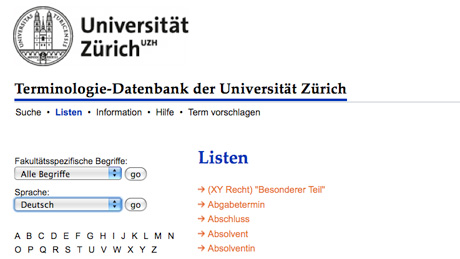 The open-source terminology database «uniterm» currently has roughly 1500 terms in both German and English. The database contains official terminology from the Rectors’ Conference of the Swiss Universities (CRUS) as well as specific UZH terms and tips on usage. The database has come far since its humble beginnings in 2001, and the number of terms compiled is growing steadily thanks to requests and tips from various institutes – and, of course, the useful terminology that Carozza collects when translating texts from the world of higher education.

A major part of terminology work is providing clear and reliable sources for all entries in the termbase. Documents from the European Commission such as the ECTS users’ guide are among the most valuable resources. And before Carozza enters a new term, she is sure to discuss it with the UZH office or experts in question. She places considerable value on open communication as it contributes a great deal to the quality of the termbase.

Roger Stupf, head of the office «Web and Information Management», points out that the database makes «an important contribution to the University of Zurich’s corporate identity». General work processes and communication will be more successful if terms are used and translated consistently and if all UZH members «speak a common language». A positive side effect is that the UZH is now easier for the English-speaking world to understand.