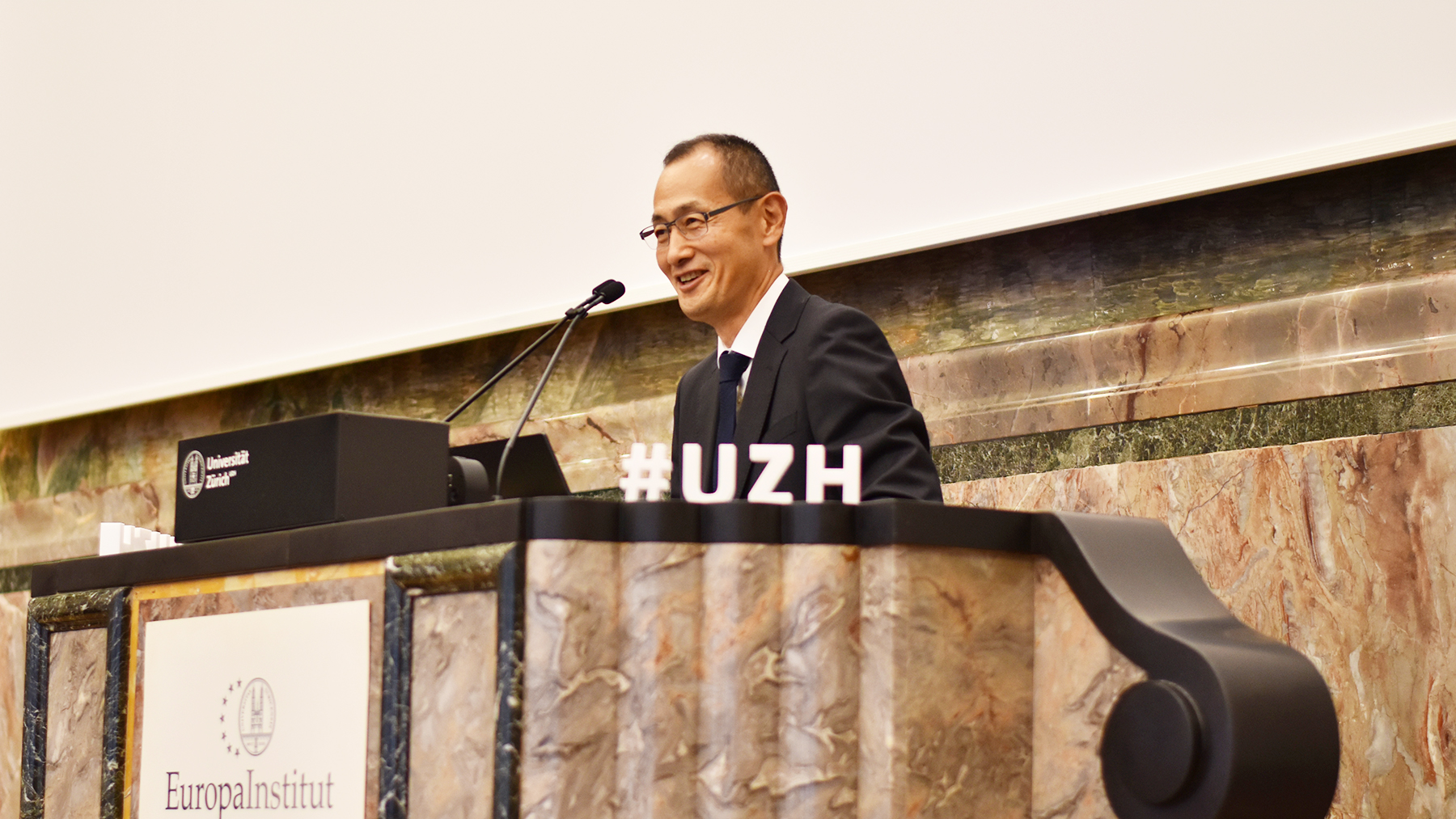 Shinya Yamanaka is celebrated like a pop star in his country, said UZH President Michael Schaepman in his introduction of the Japanese Nobel Prize winner. The Magna lecture hall was completely full without a seat to spare; there was great interest in hearing from Yamanaka about the current developments of his revolutionary discovery.

In 2006, the Japanese stem cell researcher discovered what is referred to as Yamanaka factors, which make it possible to turn back the clock in a biological sense. These four genes can be deployed to wipe out the identity of adult cells, turning them back into induced pluripotent stem (iPS) cells.

This means that they can be developed into any other type of cell, such as muscle cells. Yamanaka received the 2012 Nobel Prize in Medicine for his achievement. Since then stem cell research has been on the rise, as Yamanaka’s method doesn’t necessitate any damage to embryos.

A physician by training, Yamanaka began his lecture – which was organized by the Europa Institute at the University of Zurich – with a look back at his professional path and shared his motto for a successful career: vision and hard work. He expressed surprise at how simple it was to transform normal cells into iPS cells. Working together with his team of young researchers –Yoshimi Tokuzawa, Kazutoshi Takahashi and Tomoko Ichisaka – he first succeeded in triggering this transformation in mouse cells in 2006 and with human cells one year later.

Afterwards, he founded the Center for iPS Cell Research and Application (CiRA) at Kyoto University with the aim of developing therapies with iPS cells. “I thought it would certainly take a very long time to reach the point of being able to use iPS cells in human patients,” recalls Yamanaka.

However, just seven years after his initial discovery, researcher Masayo Takahashi succeeded in using iPS cells to create a retinal film that was implanted to stop a patient’s progressive blindness. According to Yamanaka, using this approach in regenerative medicine to recreate cells, tissue and organs is one of the two most important applications of iPS cells.

Stem cells on the cheap

Using a patient’s own cells to create iPS cells means that the recipient of the stem cell treatment is the same person as the donor. This has the advantage of reducing the risk of transplant rejection (autologous approach). Producing individual iPS cells is extremely expensive and time-consuming, however. “In a lab with three employees, we could only produce iPS cells for three customers every year at a cost of USD 400,000 per patient,” explains Yamanaka. He hopes that with the help of automation, the costs can be reduced to USD 10,000 by 2025.

Yamanaka is also pursuing another approach to make iPS cells cheaply and quickly available to researchers, businesses and patients. In 2019, he founded the CiRA Foundation, a non-profit cell bank that develops iPS cells from healthy donor cells and produces them in bulk (allogenic approach).

However, if the patient’s tissue profile doesn’t align well enough with that of the donor, the transplantation can trigger an immune response. Yamanaka says that with its current inventory, the bank could treat 40 percent of the Japanese population. In order to be able to treat more people in the future, his company started work on developing genome-edited iPS cells this year. 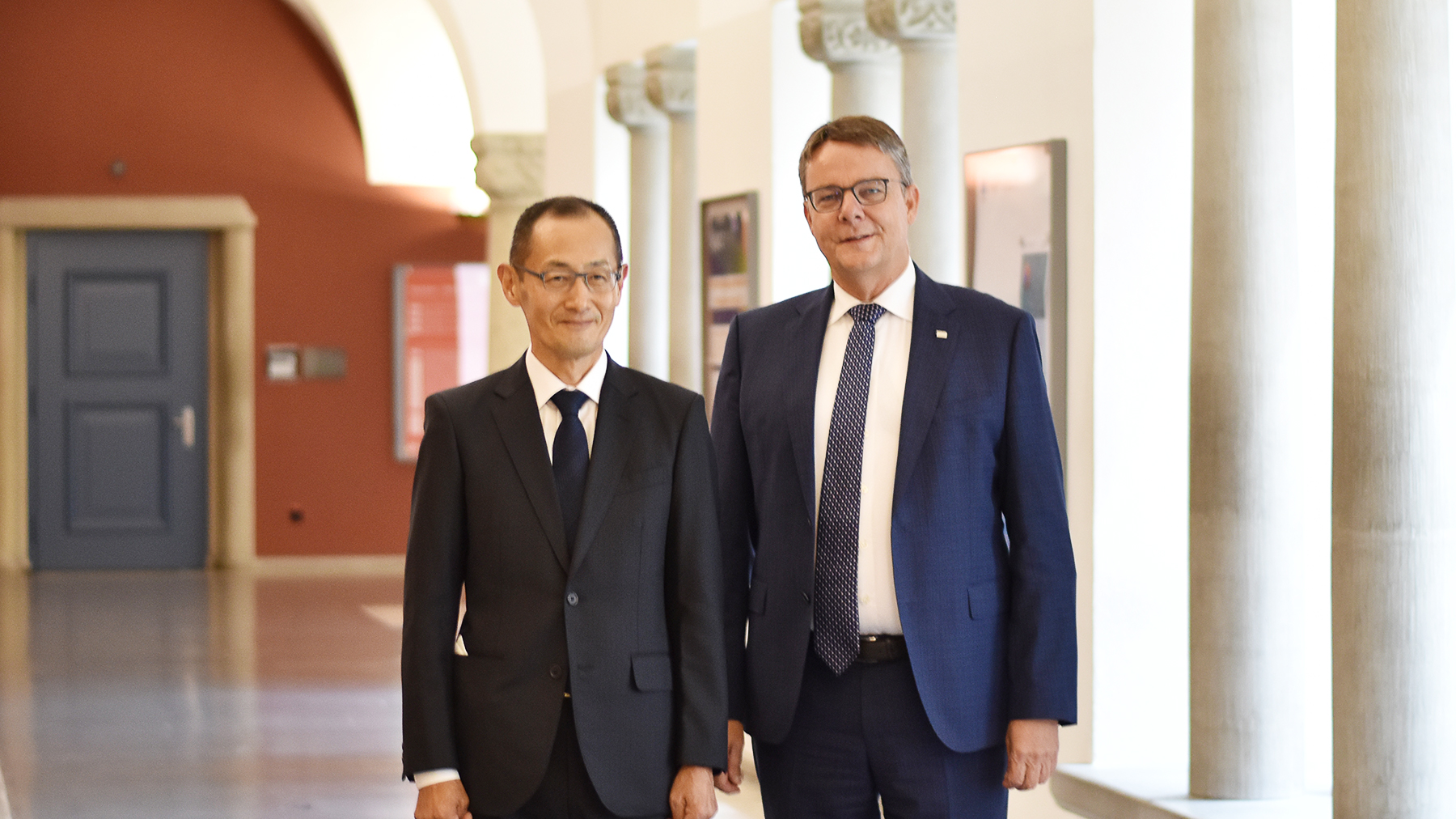 "The second important application for iPS cells is drug development,” says Yamanaka. He used the example of amytrophic lateral sclerosis (ALS) to illustrate his point. ALS is a nervous system disease in which motor neurons are destroyed. There is currently no cure. Medicines that showed promise in lab mice turned out not to work in humans.

Yamanaka says it’s essential to be able to study drugs in “human” models. “iPS cells can be turned into functional motor neurons,” he explains. “If you use the cells of an ALS patient to do so, however, they end up with the same defects.” In this way it would be possible to test ALS drugs directly in the test tube.

This approach allows many drugs to be tested at once, including the effectiveness of existing compounds. For instance, in one ongoing study, a researcher named Haruhisa Inoue discovered that the leukemia drug Bosutinib was able to stop the deterioration of motor neurons. Five out of nine ALS patients treated with the drug showed signs that perhaps their disease could be stopped.

Simon Hoerstrup, director of the UZH Institute for Regenerative Medicine (IREM), opened the audience discussion with the question of how to promote societal acceptance of these new forms of treatment. Yamanaka himself was cautious and restrained in his answers. “Even for me, using iPS cells still feels strange,” he says, “I also regularly ask myself if it’s the right thing to do. I think it’s necessary to have this attitude. Otherwise science can become dangerous.” Science is making enormous strides, and society needs to keep up in order to discuss the ethical questions that arise in tandem, the Nobel laureate concluded.

The University of Zurich and Kyoto University have been working together for many years. In 2017, cooperation was officially launched between the IREM and CiRA, followed by the lab-in-residence program and joint publications. Since 2020, both universities have enjoyed a strategic partnership, with fruitful cooperation that spans evolutionary biology, cancer research, law and AI, and healthy aging.

Yamanaka’s visit to UZH strengthened this cooperation. Before his talk, junior researchers who deal with iPS cells had the chance to present their work and pose questions to the renowned scientist. “This is a valuable opportunity for up-and-coming scientists,” says Simon Soerstrup, Director of IREM.