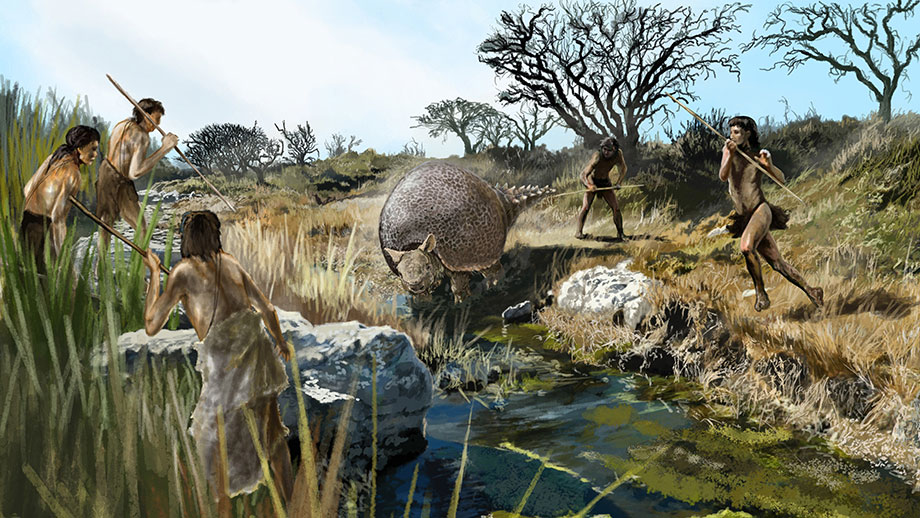 Northern Venezuela must have been a paradise for flora and fauna. Some 18,000 years ago, mighty mastodons would trudge across the humid landscape, with giant snakes slithering through the jungle and huge sloths slowly moving about in the treetops.

A glyptodont would quench its thirst at a watering hole and then retreat into the shade – and suddenly find itself surrounded by a group of humans, armed with spears and clubs. One of the hunters would raise their arm and take down the prehistoric animal with a single, heavy blow to the front of its skull. It must have been a joyous moment for the hunters, since their prey would have provided them with around 170 kilograms of meat and fat to eat, according to a recent study conducted by UZH paleontologist Marcelo Sánchez and his team.

This in many ways remarkable hunting scene can be reconstructed based on an analysis of fossilized glyptodont skulls. They were found near the Caribbean in northwestern Venezuela, which today is a dry and inhospitable area. The researchers analyzed half a dozen skulls, four of which had distinct fracture patterns. They were taken from the well-known archaeological sites of Muaco and Taima-Taima, some 10 kilometers from the coast. Usually stored in local museums, the remains were dated to between 16,000 and 20,000 years ago. The fossils are evidence that a genus of giant armadillo called glyptotherium once roamed these parts – and these slow-moving animals would have been an obvious target for early hunter-gatherers. But while earlier studies confirmed that the large, armored herbivores were indeed hunted further south in the Pampas and Patagonia regions in Argentina, there was no evidence of this happening in the north of South America. “Our study is the first to indicate that glyptodonts were hunted in this region,” says Marcelo Sánchez.

The evidence suggests that the hunters’ fatal blows were dealt with a stone chopper or club, and not using spears like elsewhere. The hunters must therefore have been brave, with good observation skills and knowledge of their prey, says the UZH paleontologist. According to the researchers’ analysis, the hunters struck the creatures at the most vulnerable part of their skull. Apart from the front part of the head, the prehistoric herbivores, which could weigh up to 400 kilograms, were almost fully protected by a strong carapace. 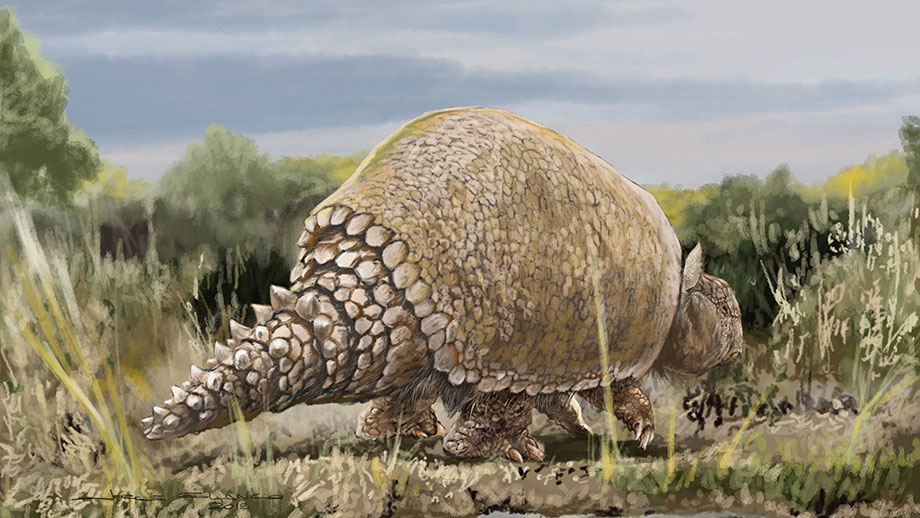 The findings shed new light on the role of humans in the extinction of terrestrial megafauna species in South America, including giant birds of prey, giant bears and giant saber-toothed cats. Most of these spectacular species have gone extinct, with only a few, such as the capybara (Hydrochoerus hydrochaeris), still around today. What role did humans play? Was organized hunting by humans responsible for their disappearance, or was it mainly the result of the dramatic climate changes that occurred at the end of the last ice age?

“It would be absurd to claim that our study identifies humans as the main factor,” says Marcelo Sánchez – after all, what are four killed glyptodonts in the grand scheme of things? And yet, the findings show that early humans in South America hunted megafauna and therefore potentially contributed to their disappearance. “We’ve provided a piece of the puzzle that humans were capable of killing these large animals,” says the paleontologist.

Continental differences in the disappearance of megafauna

It’s also interesting to look further north, to the North American continent. The Isthmus of Panama, which connects North and South America, allowed the giant animals species to move between the two continents. While roughly 82 percent of megafauna went extinct in South America some 12,000 years ago, in North America only around 70 percent disappeared. Paleontologists believe that in North America, humans played a pivotal role, as mass extinction of megafauna largely coincided with the Clovis culture, a prehistoric culture named for stone tools found near Clovis in present-day New Mexico. According to this interpretation, the Clovis people were highly skilled at hunting the giant animals.

But the glacial conditions, known as the Younger Dryas, that hit the northern hemisphere also contributed to the animals’ disappearance. South America, however, wasn’t affected by this period of cold weather. In short, the debate about the impact of humans is still ongoing, and we only need to look to Africa to see that the fate of megafauna was by no means a foregone conclusion. “The survival of megafauna in Africa proves that it was possible for giant animals and humans to coexist,” says Marcelo Sánchez.

Rewriting the history of human settlement

The paleontologists’ study, a joint endeavor by researchers from Zurich, Venezuela and Argentina, also sheds new light on the history of human settlement in South America. If giant armadillos were hunted and killed 16,000 years ago in what is today Venezuela, this obviously means that humans also lived there at the time. “It’s clear that prehistoric people lived in various places across South America even at this early stage,” says Marcelo Sánchez.

Not long ago, such a claim would have been met with considerable opposition, as it was previously believed that the earliest human settlers arrived in South America much later, thousands of years after the Clovis culture emerged in North America around 12,000 years ago. But this chapter of human settlement history is currently being rewritten based on new archaeological sites and genetic analyses. The new version suggests that prehistoric populations rapidly moved south even before and during the Clovis culture and settled across the continent, as far south as Tierra del Fuego.

The UZH paleontologist’s findings on glyptodonts in the north of South America fits in nicely with this new picture. The sites where the skulls were found aren’t far from Panama, close to the corridors likely taken by the prehistoric people migrating to South America. So the unknown glyptodont hunters may well have been among the earliest settlers in South America, and close relatives of their mammoth-hunting neighbors in the north.

The University of Zurich’s Paleontological Institute is home to a unique collection of megafauna fossils from South America. The collection, which has been at UZH for decades, was put together by Santiago Roth. The Swiss-Argentine paleontologist was born in Herisau in Eastern Switzerland in 1850 and emigrated to Argentina in the second half of the 19th century. The avid collector systematically gathered the remains of the extinct prehistoric animals. His collection includes fossils of all major megafauna groups, including glyptodonts.

A new SNSF project has now brought together researchers from UZH and Argentina to analyze and organize the valuable collection, which will shed light on the spatial and temporal dynamics of megafaunal extinction. Jakob Roth, as he was originally known, became a professor of paleontology at the National University of La Plata (Argentina) in 1905 and died in 1924.

Marcelo Sánchez is keen to involve South American researchers in the project, including paleontologist Analía Forasiepi from Mendoza (Argentina), among others. According to Sánchez, one of the main aims of the project is to “decolonize” the collection. The project will run until 2025 and include international workshops and conferences.