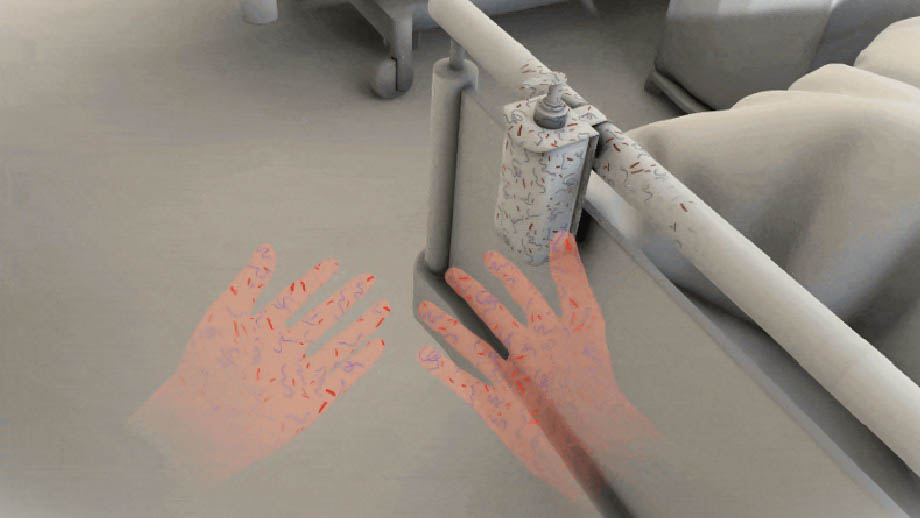 A virtual hands opens the door, and we move toward the patient, who has already removed his top. The hand reaches for a stethoscope and places it on the patient’s chest. This is when we see them. Virtual germs. First on our fingers and the back of our hand, and then they spread to our patient. This virtual reality simulation illustrates one of the fundamental problems in day-to-day hospital life – lack of hand hygiene. It can lead to patients becoming contaminated with germs, putting them at risk of infection.

Proper hand hygiene is an essential element in educating and training hospital staff. But the problem remains: “Germs aren’t visible to the naked eye,” says Valérie Lapaire, a researcher at the Department of Infectious Diseases and Hospital Epidemiology at the UniversityHospital Zurich. To solve this problem, researchers have developed a training program in cooperation with Ateo, a local virtual reality (VR) agency. The program helps users understand where the germs are and how they spread from our hands to surfaces across the room, including to patients.

The virtual hygiene training program was originally geared toward hospital staff, but since last year it has also been used to train medical students. The pilot project is co-headed by Lauren Clack, a professor at UZH’s Institute for Implementation Science in Health Care. The training program combines VR with traditional learning methods. This means that students are also required to read and discuss additional materials on the topic of hand hygiene, for example. But the VR training element is key when it comes to providing students with an eye-opening experience, says Clack: “The visualization highlights the consequences of poor hand hygiene, and hopefully students will remember this when they’re in the hospital.” The prevention course for students was developed thanks to funding from UZH’s Teaching Fund, which promotes a select number of innovative teaching projects each year.

Success stories like these are a major reason why UZH has this year significantly increased its funding for innovative teaching projects in line with international trends (see box). In August 2022, the university launched five concerted funding streams with different profiles under a joint funding program for university teaching (“Universitäre Lehrförderung”, ULF). The streams range from open_innovation for small-scale experiments to global_innovation, which focuses on international courses that are part of alliances with other universities.

Jan Seibert is no stranger to innovative teaching methods. The geography professor has been working with games for several years. Perhaps the most well-known and successful game, which is now used worldwide and whose learning outcomes he has also analyzed, is called Irrigania. The game lets students take the roles of farmers involved in water conflicts in a village with limited water resources to irrigate the fields. “The goal is for students to understand that maximizing their own profit often conflicts with the common good,” explains Jan Seibert. This economic problem is known as the tragedy of the commons. It refers to a situation in which individuals with access to a shared resource act in their own interest and, in doing so, ultimately deplete that resource. “The classic example is cattle farmers who share a parcel of land on which their cows can graze. If you add another cow, you’ll get more milk, but if every farmer does that, there won’t be enough grass and the cows will starve,” explains Seibert. 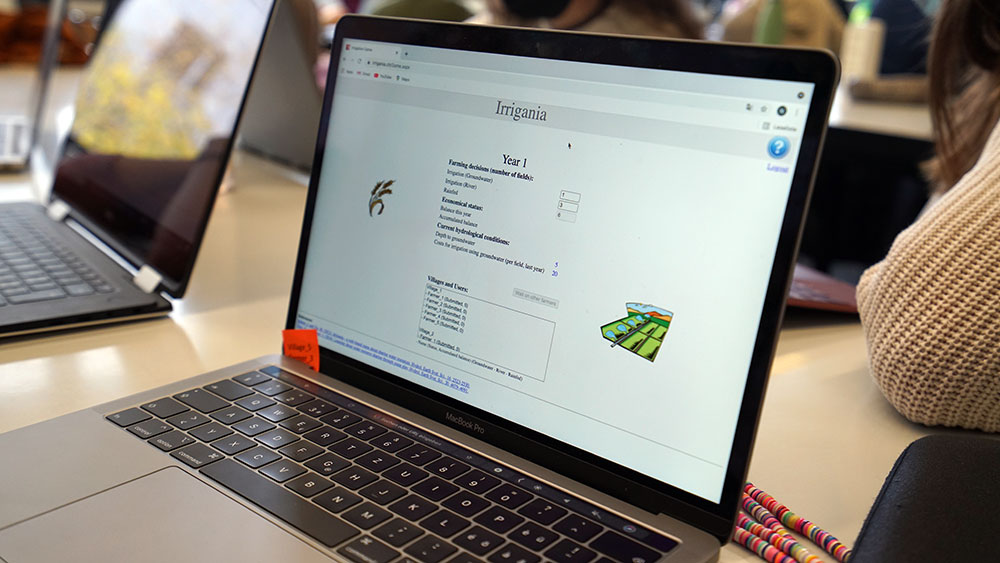 A look at the "Irrigania" teaching format in which students take the role of farmers with limited water resources. (Image: zVg)

Many environmental problems and conflicts over limited resources can be traced back to this kind of behavior, which may be rational from the individual’s point of view but is ultimately to the detriment of all involved. Seibert has his students play the game live during his lectures. One thing he’s noticed is that when the farmers, i.e. the players, know each other, they are more likely to act in moderation than when they’re dealing with strangers. “Knowing one another is a form of social control and appears to boost solidarity.” If the players don’t know each other, they tend to focus on pursuing their own interests and use as much water as possible to maximize their profits. Irrigania helps students understand the conflicts that can arise when people share a resource, and why they arise.

For Jan Seibert, using games to impart knowledge also has other benefits. For example, teaching students how important cooperation and communication is when it comes to solving problems. According to the geography professor, this kind of strategic knowledge is also getting more and more important in the professional world. In addition, he develops his games together with his students, who get to practice key skills such as critical thinking, problem solving, teamwork and time management.

And the cherry on top? “It’s also a lot of fun,” says Seibert, both for him and his students. This is why he has extended his work to other games, including some that non-scientists outside of UZH can get involved in, such as CrowdWater, which lets the public collect water data. The goal of this citizen science project is to gather as much data as possible and in this way improve predictions of hydrological events, such as droughts or floods.

Another project that enables learners to access valuable knowledge in an open, straightforward and efficient manner is a self-study program on learning programming skills. The project, called “Programmieren lernen im Selbststudium”, is based on the idea that “nowadays, programming skills are an asset, and sometimes even a requirement, in all areas of research and professional fields,” says IT specialist Carol V. Alexandru. “And programming is all about practice,” he adds.

This is why his team at the Department of Informatics at UZH developed a web application called ACCESS that allows students in all fields to learn how to program, independently and at their own pace. The students’ solutions are assessed automatically, and they receive individual feedback. Programming this is a highly complex task, says Alexandru. “Depending on the complexity of the exercise, dozens of aspects of the student’s solution need to be checked.” But the resulting feedback is bespoke to each student and requires no additional staff costs. Moreover, ACCESS has a function that allows teaching staff to use short exercises during their lectures to check whether the students have understood what they’ve just explained. “Instructors can thus clear up misunderstandings and knowledge gaps right away,” says the informatics specialist.

The online tool was originally developed for informatics students, but thanks to funding from the Teaching Fund, it is now also being made available to anyone who is matriculated at a Swiss university. ACCESS teaches the programming language Python, but according to Alexandru, there is widespread interest in also using it to teach the programming language R. A separate curriculum for R is therefore currently in the works. “ACCESS is a great example of how a successful and well-designed teaching program can be used by a wider audience,” praises Hanna Lora Freeman of UZH’s Center for University Teaching and Learning.

UZH is increasing its incentives for teaching staff to develop and test new ideas and teaching formats. The university’s Teaching Fund, which was introduced in 2016, has been replaced by the more wide-ranging universitäre Lehrförderung, or ULF. Funding has nearly been tripled and will total CHF 2 million from 2023.