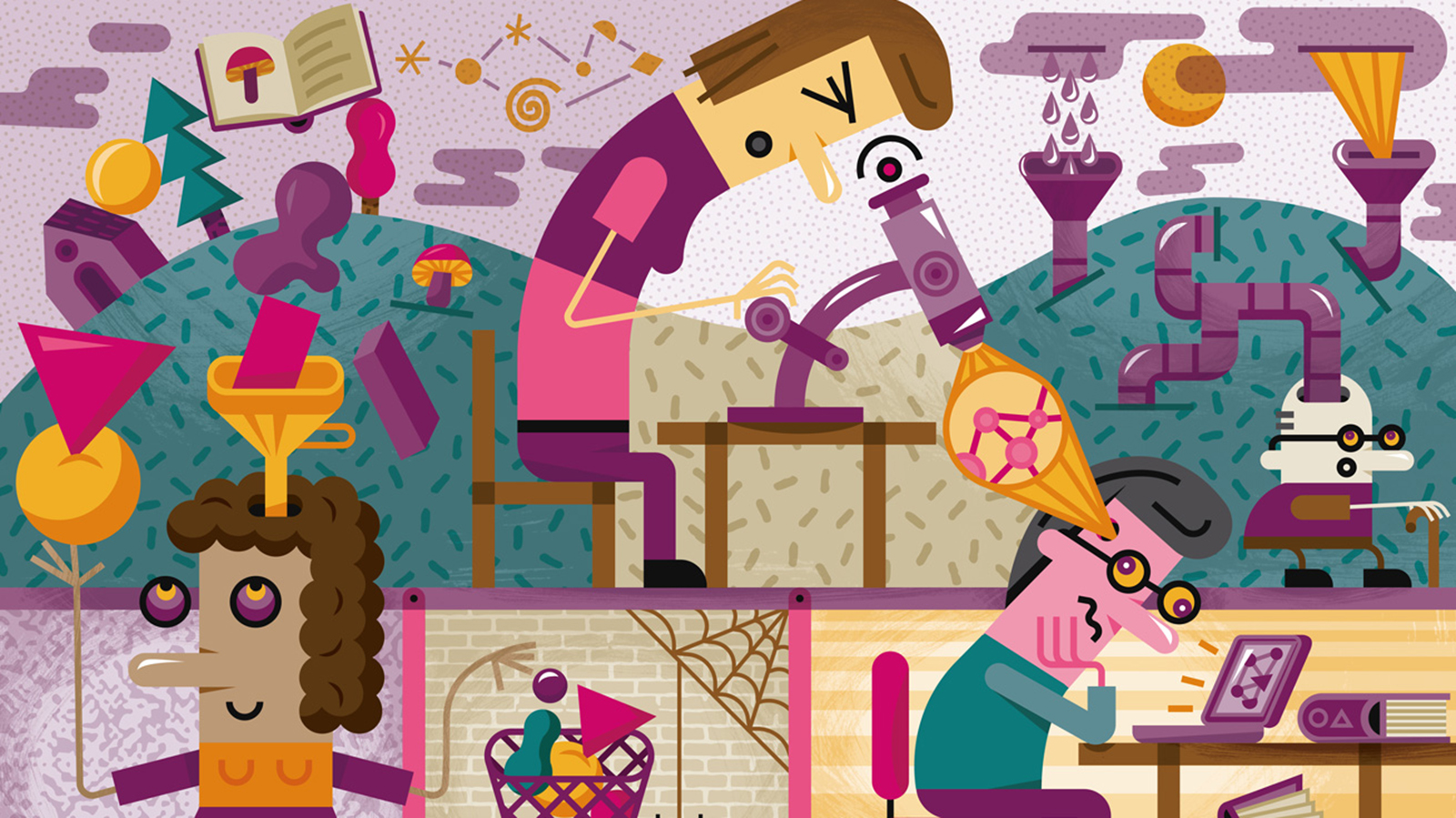 besser lernen
We are capable of learning throughout our lives: always dare to learn something new and keep at it - your brain will thank you. (Illustration: Samuel Jordi)

Some proverbs or sayings contain a grain of truth, while others are simply wrong – and scientifically disproven. “You can’t teach an old dog new tricks” is one such nugget of folk wisdom. “It’s one of many myths surrounding the topic of learning,” says neuropsychologist Nora Raschle of the Jacobs Center for Productive Youth Development. Raschle researches the development of the brain in children and young people, as well as the learning process during these years.

In the earlier part of the 20th century, scientists believed that the mature brain (i.e. from about age 25) no longer developed, and that the old dog saying was indeed true. But since the 1980s, this view has fundamentally changed. Research – including at UZH – has repeatedly shown that the brain changes throughout the lifespan and remains more or less flexible. This plasticity is the reason we are able to continue learning and developing our skills and knowledge from early childhood right through to old age.

But the conditions for our voyage of learning change massively as we age. As children, the wind is at our backs and it’s plain sailing. “We are scientists from birth,” says neuropsychologist Raschle, who publishes a blog, “Born a Scientist”, explaining her research. “Kids are incredibly inquisitive – they like to explore their environment, touch and taste things, and test limits.” Learning happens naturally as a side-effect of this curiosity: children learn to walk, to talk, to read.

Later, they develop the ability to understand the feelings of others, to regulate their own emotions and to think in more complex terms. During these years, the brain is hugely flexible, dynamic and receptive. The neurons are tightly interwoven, the neural networks are adaptable, and communication between the cells is smooth and rapid.

When we get older, these conditions change considerably. As it ages, the mass and volume of the brain decreases, and the neurons no longer pass on information as quickly. This slowing down and shrinking process begins gradually in our 30s and speeds up considerably later on. For our learning voyage, it’s like sailing into a headwind – tricky, but not impossible. As experienced sailors know, you can also make progress when the wind is against you, you just need to know how. In sailing, you would tack the boat – but what can we do when learning?

There are options: for example, you can keep your brain “muscle” in shape in adulthood with regular workouts. Just as if you want strong toned biceps, you need to do weight training, if you want your brain to stay sharp, you need to do mental training. Neuropsychologist Susan Mérillat of the URPP Dynamics of Healthy Aging (see box) conducts research into the changes that take place in the adult brain as it learns something new. She looked at a cohort of golf beginners aged between 40 and 60 to find out how intensive training in golf, a cognitively and physically challenging sport, influenced the brain. Her research showed that after just 40 hours of golf lessons, participants’ hand-eye coordination, a vital skill in golf, improved considerably.

Moreover, changes occurred in the brains of the new golf enthusiasts. Mérillat observed that in the brain’s visual cortex, the gray matter in which the neurons are embedded grew. So it seems that taking regular golf lessons could also train specific “brain muscles” in our heads. The neuropsychologist also discovered that golfers who completed the training program in a shorter period of time and had thus trained more intensively, made greater progress and displayed more pronounced changes in the brain.

Network of pathways in the head

Intensive training and learning processes – whether perfecting our golf swing, brushing up on our German vocabulary, or solving tricky math problems – lead to changes in the transfer of signals at cellular level, i.e. communication between the neurons, and thus to changes in the neural networks. With regular practice of these sorts of “brain training”, connections between the neurons are strengthened, or new ones are even created. If, on the other hand, they are used infrequently or not at all, these connections gradually atrophy.

“It’s like a network of footpaths,” explains Mérillat. “The paths used by lots of hikers are broad and solid underfoot, whereas the ones that are used only rarely or not at all become narrow and overgrown with grass and bushes.” In other words, the communication routes in our heads that have been built up by physical and mental training have busy data traffic traveling through them, and large quantities of information can thus be transferred and exchanged relatively quickly. This makes us more capable of doing cognitive tasks.

The old adage of “practice makes perfect” could thus perhaps more accurately (but less pithily) be expressed as “practice makes our brain grow and leads to clear progress”. And yet... it’s not quite that simple. You first need to learn how to learn. “Many people don’t learn very efficiently,” says Mérillat. Although it is important to repeat whatever it is we want to learn, pure repetition is of little use – variety is the spice of life, and our brains like it too. Nora Raschle says that to learn successfully, we need to create links between different areas of the brain. That means approaching the material in a variety of ways.

For example, if we want to acquire knowledge about the functioning of cells for a biology exam, we might first read a text about it, then draw a detailed sketch or create a mind-map, look for linguistic comparisons, analogies, images – for example picturing the construction of a cell like that of a factory or a city – and then also discuss what we’ve learned with others. This multifaceted examination of a topic means the knowledge can be retained for longer in our brain’s information network. “If we only study in the way that we think suits us best, it’s less effective,” reiterates Raschle. “Cultivating a range of learning styles increases retention.” 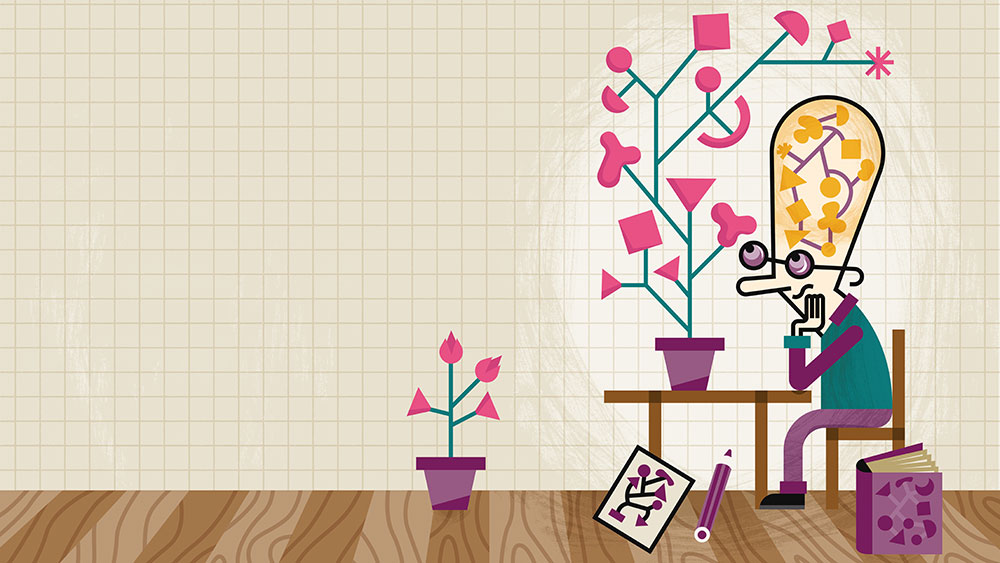 besser büffeln
Through a multifaceted approach to a topic, knowledge is stored more sustainably in the information network in our heads. (Illustration: Samuel Jordi)

Building castles in the air

Various neural networks are also involved in our memory, which as an information and knowledge storage center is key for learning. One of the areas of research for UZH cognition psychologist Lea Bartsch is how particular study techniques can positively influence the recall ability in people of different age groups. One of these memory strategies is the Loci method, used to great success by speakers in Ancient Greece more than 2,000 years ago.

It goes like this: with your inner eye, picture a house – maybe even your own apartment – and put particular words, phrases, numbers or pictures that you want to remember into different rooms. As you later walk through these imaginary rooms, you will be able to find and recall the contents you left there. This method is also used by competitors in memory sports. Sometimes they build whole castles in the air where they can store huge amounts of information in the numerous chambers and halls, ready to recall at will.

Building such castles to store memories is time-consuming, however, and thus not always practical in everyday situations. A simpler method involves remembering words by making up a sentence containing them. For example, the words pony, tooth, coffee and football could become: “The pony with the large tooth drinks coffee then plays football.” The sentence might not make much sense, but it’s original and combines the terms that you want to remember, making them stick in your mind.

Lea Bartsch has now investigated how young adults aged from 18 to 32 and older people between the ages of 65 and 80 can benefit from this memory strategy. She found that the technique was of most help to the young people. They had much better recall of the information after the training, whereas for the older people it hardly made any difference. “This finding is true for one-off, short training sessions,” says Bartsch, “but with repeated training over several weeks, this strategy can also help older people improve their memories.”

It’s not that learning simply becomes more difficult with age, but rather the quality of the learning changes. The young brain is particularly plastic, efficient and receptive. Children and young adults therefore have what psychologists call a high fluid intelligence. Older people, in contrast, have more trouble acquiring knowledge that is completely new to them. “But there are some things that an older brain can do better,” says Susan Mérillat.

For example, older people are good at linking new information with the knowledge that they have built up over decades. In the terminology of psychology, this is called crystallized intelligence. So we can say: if young people are canny and smart, older people are wiser. They can compensate for the age-related limitations to their brain’s performance with their experience. The brain can also compensate for its limitations in other ways. Certain regions of the brain can stand in for other areas and take over their functions if they are impaired or non-functional due to a disease or accident. “The visual cortex, for example, helps the area of the brain that processes touch if a person can no longer see,” says Mérillat.

This is further evidence for the incredible plasticity of our brain, which is capable of changing and learning throughout our lifetimes – provided we remain curious and thirsty for knowledge. “It’s worth laying down cognitive reserves during our younger years; these are like capital that we can draw on in old age,” says Susan Mérillat.

Her colleague Isabel Hotz at the URPP Dynamics of Healthy Aging has shown that a good education and commitment to lifelong learning continues to bear fruit in old age: Hotz’s long-term study analyzing the data of more than 200 senior citizens clearly revealed that in the brains of people with a university degree, certain degenerative processes unfolded less quickly and they were able to better compensate for age-related limitations.

Staying active and interested apparently pays off, therefore, and many older people in Switzerland do just that – another UZH study recently found a great appetite for education opportunities among Swiss pensioners. That’s good news, says Nora Raschle, as curiosity, far from killing the cat, is the engine that drives learning.

After a phase of intensive studying, we need a break in order for the material we have learned to sink in. Studying continuously without breaks does not work.

Instead of revising the same subject without interruptions, we should break the study phase into portions and switch between different subjects, perhaps in hour-long blocks.

If we want to learn actively and successfully, we need to stimulate various areas of our brain. That means acquiring knowledge by reading texts about it, drawing sketches, finding metaphors and analogies, and deepening our knowledge by discussing it with others.

A bit of stress like an upcoming deadline or exam can stimulate us to learn better, but extreme stress and negative emotions have the opposite effect. It’s therefore worth trying to create a stress-free learning environment in which you feel comfortable.

Enough sleep, a healthy diet and a reasonable amount of exercise increase our physical wellbeing and help us learn successfully.

We can keep learning throughout our lives: keep challenging yourself to learn new things and keep at it – your brain will thank you.