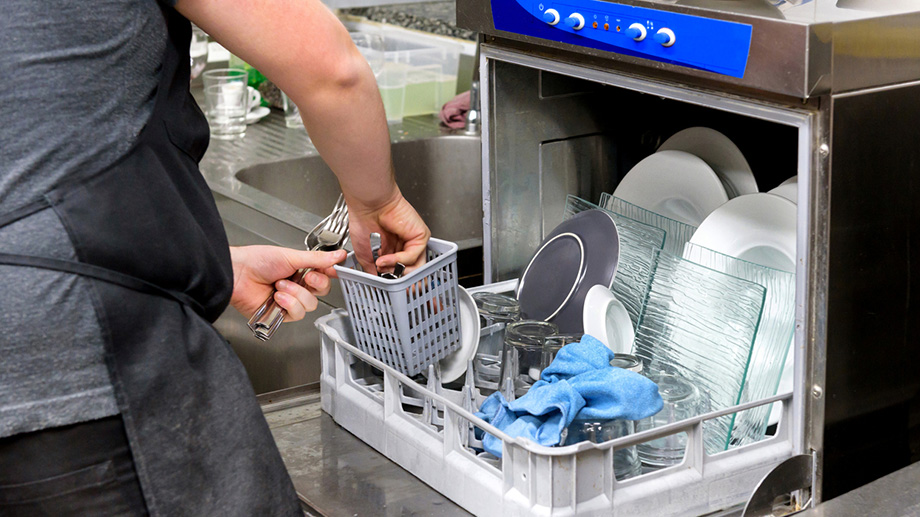 Whether it’s at a restaurant, at school or in the barracks, commercial dishwashers help plates, glasses and cutlery become squeaky clean and dry in a matter of minutes. These practical appliances come with risks, however, as was recently discovered in a new study by researchers at the Swiss Institute of Allergy and Asthma Research (SIAF), an associated institute of the University of Zurich (UZH). One ingredient in particular found in commercial rinse agents has a toxic effect on the gastrointestinal tract.

A typical cycle in a commercial dishwasher involves circulating hot water and detergent for around 60 seconds at high pressure. Afterwards, there is a second 60-second washing and drying cycle in which water and a rinse agent are applied. “What’s especially alarming is that in many appliances, there’s no additional wash cycle to remove the remaining rinse aid,” says Cezmi Akdis, UZH professor of experimental allergology and immunology and director of the SIAF, who led the study. “This means that potentially toxic substances remain on the dishes, where they then dry in place.” When the dishes are used the next time, this dried chemical residue can easily end up in the gastrointestinal tract.

This inspired the research team under Akdis to investigate what effect the components of commercial-grade detergents and rinse agents have on the epithelial barrier in the gut – the layer of cells that lines the intestinal tract and controls what enters the body. A defect in this barrier is associated with conditions such as food allergies, gastritis, diabetes, obesity, cirrhosis of the liver, rheumatoid arthritis, multiple sclerosis, autism spectrum disorders, chronic depression and Alzheimer’s disease.

Similar protective layers are also present on the skin and in the lungs. As numerous studies have shown, many additives and chemicals that we encounter in everyday life can damage these layers. “We assume that defective epithelial barriers play a role in triggering the onset of two billion chronic illnesses,” says Akdis. This connection is explained by the epithelial barrier hypothesis, which Akdis has helped develop during his more than 20 years of research in this field.

The researchers used a newly developed technology for their study – human intestinal organoids and intestinal cells on microchips. The tissue forms a three-dimensional clump of cells that is very similar to the intestinal epithelium in humans. The team used various biomolecular methods to analyze the effect that commercial detergents and rinse aids have on these cells. They diluted these substances to reflect the amounts that would be present on dry dishes (1:10,000 to 1:40,000).

The result was that high doses of rinse agents killed the intestinal epithelial cells and lower doses made it more permeable. Researchers also observed the activation of several genes and cell signaling proteins that could trigger inflammatory responses. A more detailed analysis showed that one component of the rinse agent – alcohol ethoxylates – was responsible for this reaction.

According to Akdis, these findings have significant implications for public health. “The effect that we found could mark the beginning of the destruction of the gut’s epithelial layer and trigger the onset of many chronic diseases,” he says. Akdis calls for an immediate response: “It is important to inform the public about this risk, since alcohol ethoxylates seem to be commonly used in commercial dishwashers.”