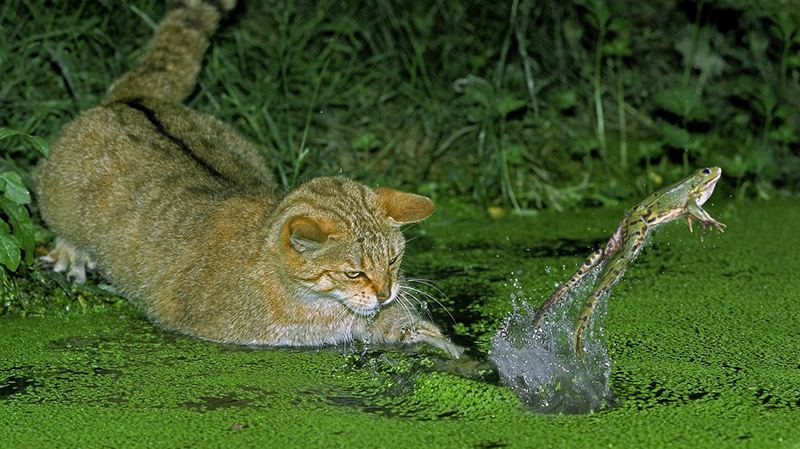 If the frogs have many enemies, the escape strategy is not very efficient. Instead, camouflage becomes more important. But even that does not always protect... (Image: istock.com/slowmotiongli)

Throughout evolution, prey animals have adopted a range of strategies to evade their predators. But these oftentimes elaborate strategies come at a cost. For example, looking out for and fleeing from predators involves a great deal of cognitive capacity and energy. Camouflage, on the other hand, may complicate the animals’ search for mates, and it largely limits their freedom of movement to the matching background. UZH evolutionary biologist Stefan Lüpold and researchers from China and the Netherlands have now investigated how frogs have adapted to these conflicting selection pressures.

The team studied the evolution of antipredator adaptation in over 100 species of frogs. Their findings indicate that frogs with few predators may rely on escape strategies to survive. Their relatively large brains allow for a flexible flight response, and their muscular hindlegs take them leaps away from their predators. These frogs can afford to be conspicuously colored, facilitating their visual communication.

When frogs are faced with many predators, however, fleeing becomes less efficient, as it takes valuable time away from searching for food or mates. “Under these unfavorable conditions, the cognitive costs needed for this strategy outweigh its benefits,” says last author Stefan Lüpold. “Here, evolution has led to a gradual shift from cognitive predator evasion to camouflage – and thus smaller brains.”

Hiding as a secondary adaptation

The study is the first to establish a direct link between brain evolution and different strategies for evading predators. It suggests that camouflage isn’t necessarily an ideal primary strategy, as is often believed, but may be a secondary adaptation when the energetic costs of cognitive predator evasion become too high. Further research is needed to determine if such links also apply to other strategies in frogs (e.g. poison glands), or if they exist in other animal species.

“Our study highlights that research on brain evolution has to consider metabolic costs as much as it focuses on cognitive benefits,” explains Stefan Lüpold. If high predation pressure leads to behavioral changes and smaller brains, it may also substantially impact other vital functions. The study further suggests that changing the habitat of prey can alter their energetic investments.