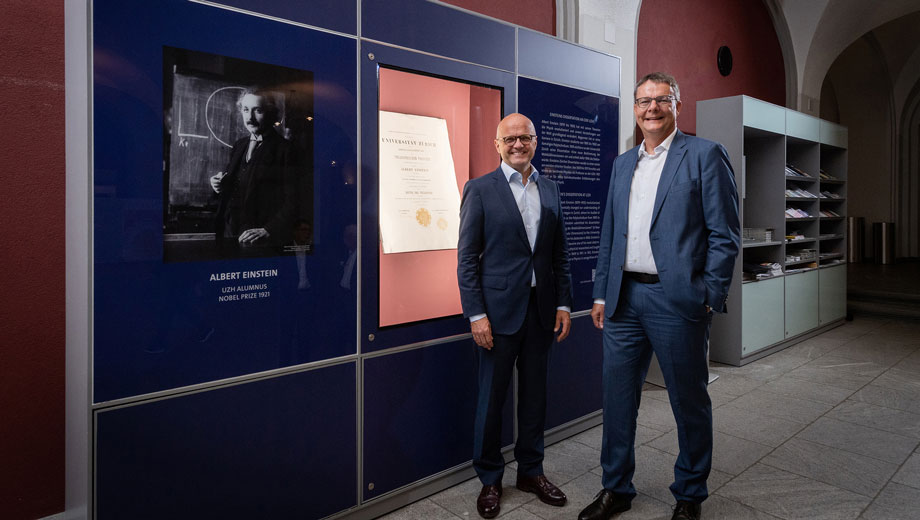 After traveling the world, Albert Einstein’s doctoral certificate has now returned to where it was issued, the University of Zurich. In 1905, the 26-year-old Albert Einstein submitted his doctoral thesis “Eine neue Bestimmung der Moleküldimensionen” (A New Determination of Molecular Dimensions) to UZH. One year later, in January 1906, the mathematics and natural science section of the Faculty of Philosophy awarded him the title Doctor of Philosophy.

Found in the attic

Handed over to Einstein in 1906, the certificate later reappeared in a house at Huttenstrasse 62 in Zurich, where the physicist had lived with his first wife, Milena Marić. It was found there in the attic in 1948 by a young student from the canton of Schwyz, who happened upon the document as well as an honorary doctoral certificate from the University of Geneva. The owner of the house let him keep the two documents. Following extensive clarifications, the authenticity of the document was confirmed by the Vice Consul of the United States of America in Lima in 1957.

From New York to Zurich

Many years later, the holder of Einstein’s diploma, who had since become an engineer, decided to part with the document. It was sold at an auction in Lucerne in 2009, only to re-surface in New York 13 years later. In the spring of 2022, an Einstein expert informed the University of Zurich that the doctoral certificate was up for sale again. The idea that this important piece of contemporary history should return to the place where it had been produced was met with enthusiasm at UZH. “Making the doctoral certificate of our alumnus Albert Einstein available to our students and the broad public was a unique opportunity,” says Michael Schaepman, President of UZH. The University of Zurich was able to acquire the original certificate thanks to a donation given to the UZH Foundation.

The display case containing the doctoral certificate was unveiled at an event organized by the Swedish Embassy in Switzerland in commemoration of the 100th anniversary of Albert Einstein’s Nobel Prize. He was awarded the Nobel Prize for Physics in 1921, which he received a year later.

Albert Einstein studied physics at the Eidgenössisches Polytechnikum (now ETH Zurich) from 1896 to 1900. Despite being the only successful graduate that year, he failed to receive an assistant’s position there.

Between 1902 and 1909, Albert Einstein worked as an employee of the Federal Patent Office in Bern. He submitted his doctoral thesis to UZH in 1905, which earned him his doctorate in 1906. In 1909, the University of Zurich appointed him as associate professor for theoretical physics, his first position as lecturer and professor. Albert Einstein left Zurich in 1911 and took up a professorship in Prague.

He returned to Zurich in 1912 and worked as professor of theoretical physics at ETH Zurich before moving to Berlin in 1914. Einstein later turned down a generous offer of a double professorship at the University of Zurich and ETH Zurich.