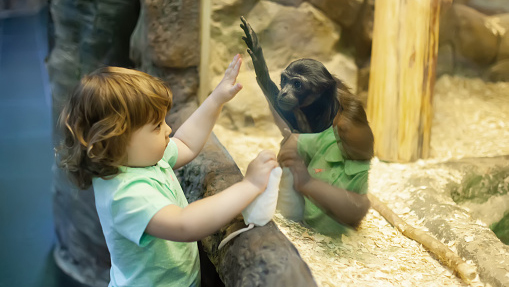 Compared to monkeys, the human brain can grow longer outside the womb, allowing children to learn their cognitive skills. (Image:istock.com/Alina_Demidenko)

During human birth, the fetus typically navigates a tight, convoluted birth canal by flexing and rotating its head at various stages. This complex process comes with a high risk of birth complications, from prolonged labor to stillbirth or maternal death. These complications were long believed to be the result of a conflict between humans adapting to walking upright and our larger brains.

Bipedalism developed around seven million years ago and dramatically reshaped the hominin pelvis into a real birth canal. Larger brains, however, didn’t start to develop until two million years ago, when the earliest species of the genus Homo emerged. The evolutionary solution to the dilemma brought about by these two conflicting evolutionary forces was to give birth to neurologically immature and helpless newborns with relatively small brains – a condition known as secondary altriciality.

A research group led by Martin Häusler from the Institute of Evolutionary Medicine at the University of Zurich (UZH) and a team headed up by Pierre Frémondière from Aix-Marseille University have now found that australopithecines, who lived about four to two million years ago, had a complex birth pattern compared to great apes. “Because australopithecines such as Lucy had relatively small brain sizes but already displayed morphological adaptations to bipedalism, they are ideal to investigate the effects of these two conflicting evolutionary forces,” Häusler says.

The researchers used three-dimensional computer simulations to develop their findings. Since no fossils of newborn australopithecines are known to exist, they simulated the birth process using different fetal head sizes to take into account the possible range of estimates. Every species has a typical ratio between the brain sizes of its newborns and adults. Based on the ratio of non-human primates and the average brain size of an adult Australopithecus, the researchers calculated a mean neonatal brain size of 180 g. This would correspond to a size of 110 g in humans.

For their 3D simulations, the researchers also took into account the increased pelvic joint mobility during pregnancy and determined a realistic soft tissue thickness. They found that only the 110 g fetal head sizes passed through the pelvic inlet and midplane without difficulty, unlike the 180 g and 145 g sizes. “This means that Australopithecus newborns were neurologically immature and dependent on help, similar to human babies today,” Häusler explains.

The findings indicate that australopithecines are likely to have practiced a form of cooperative breeding, even before the genus Homo appeared. Compared to great apes, the brains developed for longer outside the uterus, enabling infants to learn from other members of the group. “This prolonged period of learning is generally considered crucial for the cognitive and cultural development of humans,” Häusler says. This conclusion is also supported by the earliest documented stone tools, which date back to 3.3 million years ago – long before the genus Homo appeared.