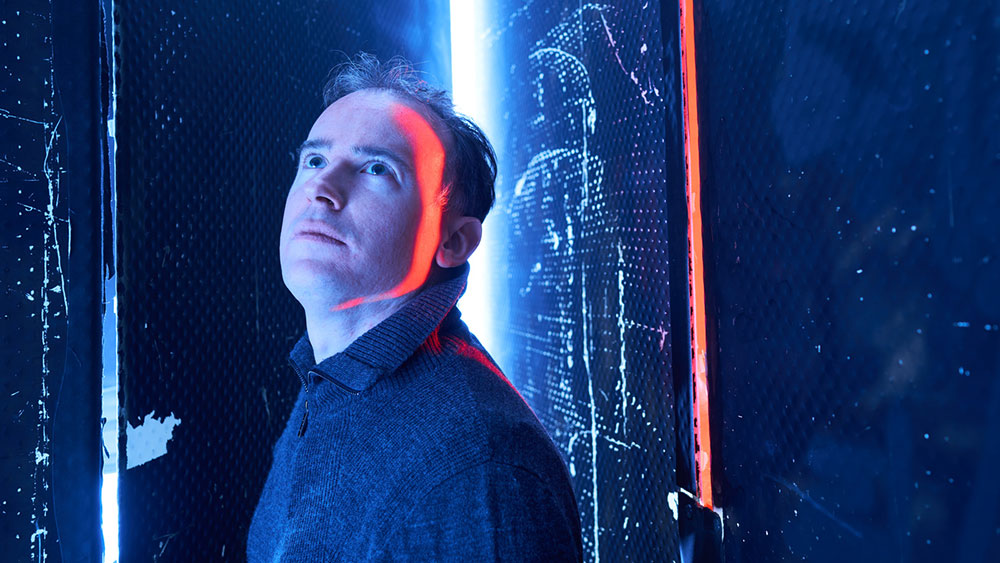 Kevin Reuter
Where is pain: In our heads or our bodies? asks philosopher Kevin Reuter. (Image: Jos Schmid)

Groaning, I squirm in my office chair as I feel a twinge in my back. It’s almost time for my online interview with philosopher and cognitive scientist Kevin Reuter. I’m still trying to get into a more comfortable position when he appears on the screen. After the initial greetings, the backache still on my mind, I ask him when he last felt physical pain. He doesn’t have to think for long. With small children at home and all the associated mess, he steps on a Lego piece at least every other day. That smarts. But generally he doesn’t have problems with aches and pains – he is interested in pain from a researcher’s point of view. He wants to know how we think and talk about pain, and how we understand it.

For a philosopher, he goes about his research in a somewhat unconventional manner. In traditional philosophy, findings are developed through rigorous intellectual work: Philosophers figure out the world in their heads. But Kevin Reuter is not content to stop at just thinking about it. The SNSF Eccellenza professor regularly comes down from his ivory tower into the everyday world of ordinary folk. He conducts surveys with laypersons, does experiments with volunteers, gathers statistics, trawls through data sets. “Experimental philosophy expands on traditional approaches and supports the development of philosophical theories with empirical studies,” explains Reuter. Theories and technical terms are compared with our everyday understanding of them – in this case on the topic of pain.

Miscommunication in the doctor's office

“Our understanding of pain is still somewhat puzzling,” says Reuter. What we really mean when we talk about pain is often unclear. Where does it hurt? Right now, in my back, for example. But is the pain really there, in my body? And if I no longer feel it, has it really gone? Some philosophers start from the assumption that pain only exists when it is consciously perceived. Ergo, it happens in the brain. Received wisdom in medicine also describes pain as a mental state. But a patient in the consulting room points to a body part.

It is precisely this discrepancy that interests Reuter. What medical experts mean when they use the word “pain” is not the same as the common understanding of many laypersons. Trainee nurses and doctors learn that pain is a complex sensory perception. Even the International Association for the Study of Pain (IASP) defines pain as “an unpleasant sensory and emotional experience,” i.e. something that happens in the brain. “Those experiencing pain, however, often talk about it in a very different way,” says the philosopher. Assessing other people’s pain poses a considerable challenge, as it is such a subjective experience. The feeling of pain cannot be shared; we are the only ones who can feel our own bodies. Conversations about where exactly it hurts thus often lead to misunderstandings, and in the worst case even to misdiagnoses and unsuitable treatment, such as the wrong kind of medication. “We need to know what we are talking about when we say something hurts,” says Reuter, who is also a member of the newly founded UZH Center of Competence Language & Medicine (www.language-and-medicine.uzh.ch).

Feeling or having pain?

Using questionnaires and tests, the philosopher is trying to pin down the enigmatic nature of the word “pain”. He has been combing through huge text collections such as the Corpus of Contemporary America English (COCA) for certain phrases, which he then analyzes. Specifically, he is interested in the situations in which people talk about “feeling a pain” and when they speak instead of “having a pain”. People are more likely to say the second when the pain is severe, Reuter has discovered. If the pain is less intense, we are more likely to say we feel a pain. “This indicates that we perceive pain similarly to colors or smells as being located outside of the mind,” explains Reuter.

If science assumes that pain is a mental emotional experience, that would mean it only exists when it is consciously perceived. There would then be no such thing as unfelt pain, Reuter says. But whether laypersons also see it like that is another question, one that he has investigated in experiments. The UZH professor and his team described to test subjects a scenario in which a soldier is injured in combat but shows no signs of pain during the fighting. The test subjects were then asked whether the soldier did not have any pain, or whether he simply did not feel it in the heat of the battle.

The majority of respondents assumed that the soldier did have pain, even if he couldn’t feel it at that moment. So for them, unfelt pain is a real possibility. But what about if a patient is given a painkilling medication which eliminates the acute feelings of pain? Thirty to 40 percent of respondents believe the pain then really does go away, while the majority think it is still there, even if it cannot be perceived. The philosopher now plans to conduct further studies to pinpoint the factors that lead to people having such differing ideas.

While I’m talking to Kevin Reuter, I forget about the niggle in my back. But I too believe it is still there and that I simply didn’t notice it for a few moments. What about when the soul is in pain? I ask. We say love hurts, after all. It hurts if our lover leaves us. People can hurt us with words. Is emotional pain real pain? Reuter has also researched this issue. There is no consensus, he tells me. Whereas around half of study participants understand emotional pain as being merely metaphorical, the other half say it is just as real as physical pain.

For centuries, from antiquity until the 19th century, medicine had a very body-centric understanding of pain. Namely, pain was caused by the humors. The theory of humoral pathology, introduced by Hippocrates and further elaborated by Galen, held that diseases came from an imbalance of the humors. In order to get well again, it was necessary to balance the four humors – black bile, yellow bile, blood and phlegm – by using opposites, i.e. treating inflammation (heat) with cold.

It wasn't until the 19th century, with developments in modern pathology, that humoral pathology fell out of favor and the theory arose that pain was a mental rather than a physical state. This development was in part due to improved diagnostic tools. It became possible to find out in ever more detail what was going on in our bodies and brains. Pain now had to have a concrete cause, a “location” – and if it couldn’t be seen in outer lesions or on x-rays, for example, it must be a subjective feeling that was wholly in the patient’s mind.

What about today? Does it even matter whether we mean the same thing when we talk about pain? Kevin Reuter thinks it does. Communication between medical professionals and patients about pain needs to improve. At the very least, medical staff need to be aware of the potential misunderstandings and should take a more nuanced approach to the phenomenon. Reuter gives lectures for medical specialists and nursing staff to educate them on such issues. He is also planning further experiments. For example, to find out how the understanding of pain by patients with chronic pain differs from that of healthy people.

And my backache? I totally forgot about it!