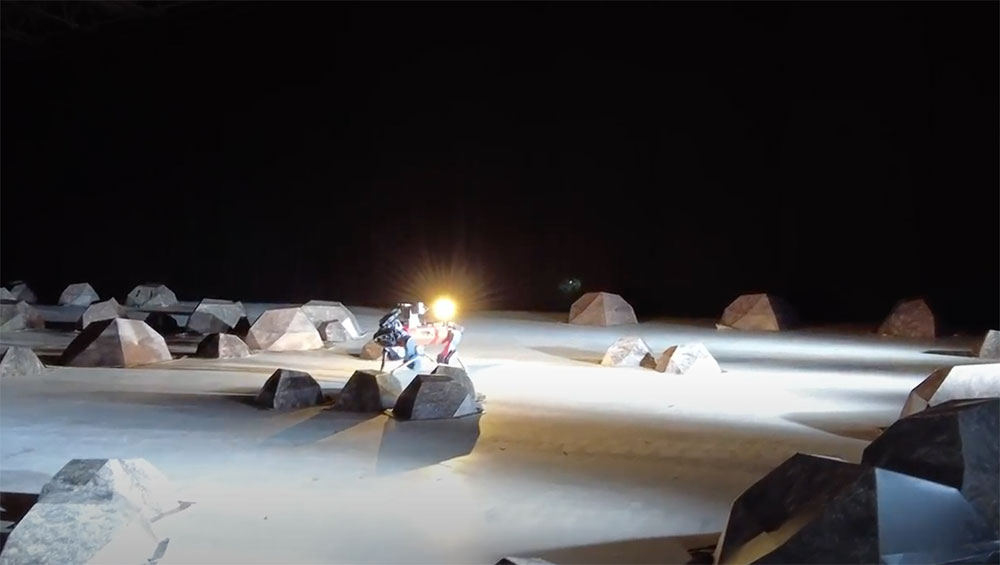 The south polar region of the moon is believed to contain many resources that would be useful for lunar base operations, such as metals, water in the form of ice, and oxygen stored in rocks. But to find them, an explorer robot that can withstand the extreme conditions of this part of the moon is needed. Numerous craters make moving around difficult, while the low angle of the sunlight and thick layers of dust make it difficult to use of light-based measuring instruments. Strong fluctuations in temperature pose a further challenge.

The European Space Agency (ESA) and the European Space Resources Innovation Center (ESRIC) called on European and Canadian research teams to develop robots and tools capable of mapping and prospecting the shadowy south polar region of the moon, between the Shoemaker and the Faustini craters. To do this, the researchers had to adapt terrestrial exploration technologies for the harsh conditions on the moon. 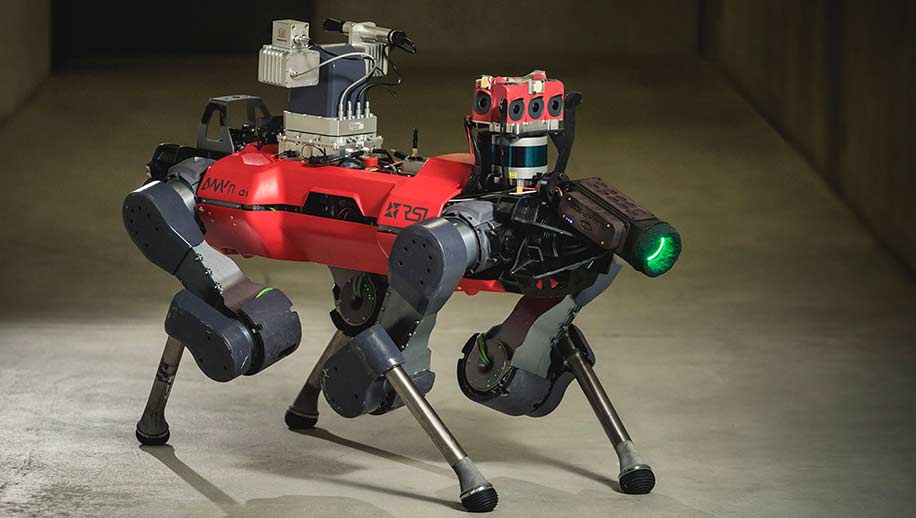 Roboterhund
Robot dog GLIMPSE is fully equipped with a variety of spectrometers to recognize rock types. (Image: Used with permission)

One of the 13 lunar rovers taking part in the competition comes from Zurich and is called GLIMPSE (Geological Lunar In-Situ Mapper and Prospector for Surface Exploration). The robot, which looks a bit like a dog, can move across terrain semi-autonomously on its four legs, and is fully equipped with a variety of spectrometers to recognize rock types.

Florian Kehl of the UZH Space Hub is leading the GLIMPSE project together with Hendrik Kolvenbach from the Robotic Systems Lab at ETH Zurich. Kehl, who previously spent five years at NASA’s Jet Propulsion Laboratory at the California Institute of Technology searching for extraterrestrial life, is scientific director of the project, while Kolvenbach is overall project manager and responsible for robotics. As well as the two main stakeholders UZH Space Hub and ETH Robotic Systems Lab, researchers and engineers from Lucerne University of Applied Sciences and Arts, the University of Basel and the companies Maxon, Anybotics and Metrohm are also involved.

The robotics behind GLIMPSE are based on the Anymal robot type developed by ETH spin-off Anybotics. The GLIMPSE robot has instruments for petrographic and chemical rock analysis, including a Raman spectrometer, a microscope and a camera with zoom lens for overview and close-up images.

GLIMPSE has already successfully passed its first test. Along with 13 other robot explorers, it showed its skills in navigating an artificial lunar landscape set up for the competition in a hangar in the Netherlands.

GLIMPSE had two and a half hours to find its way through the unfamiliar lunar landscape to a specific crater, where it then had to analyze rocks. “Afterwards, we had another hour and a half to analyze the data,” says Kehl. “It was a very tight time frame.”

The teams did not have a direct view of the lunar landscape – navigation was based on the robots’ camera recordings and on location data made to resemble satellite images. One of the difficulties was that control signals reached the rovers with a time delay. In order to simulate real conditions, the connection with the robots was sometimes even lost altogether. “Robots with mature autonomous control technology had an advantage under these circumstances,” says Kehl.

Five teams in the final

The competition revealed the robots’ strengths as well as their weaknesses: Some did not have sufficient lighting, others had problems with the batteries or struggled with the artificial signal delay. Not all of the 13 participating rovers made it all the way to the crater.

“We also encountered various difficulties,” says Kehl. Nevertheless, compared to its competitors, most of which had wheels or tracks, the four-legged GLIMPSE proved to be particularly capable and agile on rough terrain. The dog-like robot successfully passed the first round of the competition, winning 75,000 euros for the team.

The researchers are now working round the clock to optimize GLIMPSE for the final round, which will take place in Luxembourg later this year. Five teams have made it to the final. The winners stand to gain 550,000 euros to use for the further development of their robot designs. It’s conceivable that GLIMPSE could be used in a real ESA mission to the south pole of the moon sometime in the next decade. We’ve got our fingers crossed for GLIMPSE and its team!