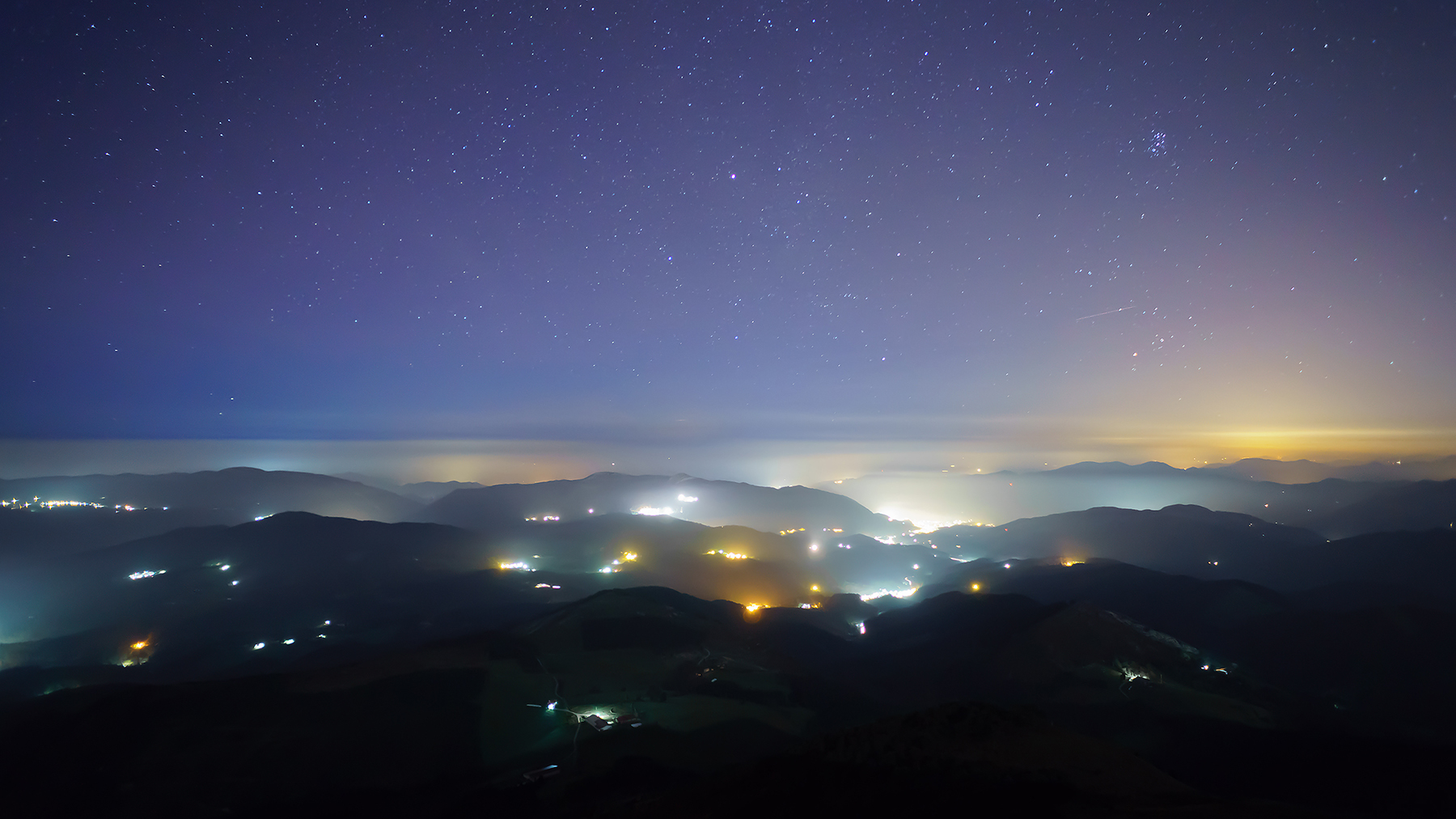 Artificial light makes the nights brighter and brighter - this can throw the ecosystem out of balance. (Picture: istock-Mimadeo)

Outdoor advertising and floodlights, broadcast towers and blinking Christmas lights – nighttime brightness has an effect on people, animals and plants. Light pollution is increasing worldwide at a rate of two to six percent per year, which, according to a publication of the Federal Office for the Environment, is probably faster than any other form of pollution. At present it is very difficult to fully gage the consequences of light pollution. The effects of bright nights on people and wildlife not only depend on the light’s intensity and composition as well as where how long it shines, but also on how light-sensitive and adaptable the affected organisms are.

One thing is certain, however: Light at night disrupts the balance of ecosystems. “Light pollution changes how species interact and assemble into communities,” says ecologist Eva Knop, privatdozent at the University of Zurich and team leader at the Agroscope research center. This has to do with the many physiological processes, such as growth or metabolism, that are in tune with the natural rhythm of day and night.

As brightness increases and darkness recedes, biodiversity is likely to suffer while biological homogenization grows. In other words, common types of species that are highly adaptable will become even more widespread, whereas rare species will become even rarer. The species most likely to be affected by this are the ones that are most active once the sun sets. And their number is considerable, with almost two-thirds of invertebrates and one-third of vertebrates active during dusk or at night. The latter includes all bat species and almost all amphibians. Although there aren't many substantive findings on the consequences of artificial light for wildlife, researchers have managed to shed light on some of the effects.

For example, it has been known since the 1930s that trees exposed to direct streetlight burst into bloom earlier in spring than those rooted under dark skies. They also shed their leaves later when fall arrives, making them more vulnerable to frost damage. Bright nights also mean that light-sensitive bat species, such as the lesser horseshoe, have less time to hunt for prey, migratory birds arrive at their breeding grounds too early, and rats develop symptoms of depression.

Artificial light even affects plants and animals that are only active during daytime, as Eva Knop and her team were able to show. Their research suggests that diurnal insects behave differently if meadows are exposed to artificial light at night. Wild bees, flies and beetles pollinate some plants – such as valerian, cabbage thistle or annual fleabane – significantly less often if there is artificial light. The lilac-purple flowers of the wood cranesbill, in contrast, attract the same number of pollinators, but get more visits from beetles and less attention from flies.

But how exactly does artificial light at night affect what bees and beetles do during the day? This is precisely what Knop’s research group is currently investigating as part of the University Research Priority Program Global Change and Biodiversity. “It’s possible that artificial light at night changes the composition and rhythm in which plants release their scent during daytime,” explains the biologist. Since plants rely on brightness to know when to use their scent to attract pollinators or fend off harmful insects, this process may no longer be in sync with the time of day or night. Another explanation could be that artificial light tempts herbivores, for example snails, into eating more leaves and flowers, which makes the plants less attractive to pollinators. “These supposedly small changes can impact wild plant populations in the long run and may also negatively affect crop yields,” cautions Knop. So far, however, there are no data to support these claims.

Artificial light may upset the natural order of things, but that isn’t necessarily a bad thing for all creatures. In their experiment, Knop’s group also found that some plants benefited. The wild carrot, for example, was pollinated much more frequently, especially by flies. And yet the advantages of bright nights can be short-lived. Illuminated driveways and walls make it easier for spiders to hunt their prey – but some then grow big so fast that they no longer survive the shedding of their skin. Streetlights may provide the common pipistrelle bat with a feast of moths, but if that’s all they ever eat, their supply of moths will eventually run out. Artificial night lights also cause some songbirds in urban areas to start singing earlier than their competitors, and while this means they get to mate earlier and more often, it also means that their chicks will hatch before food is readily available.

The effects of bright nights are also felt by humans. “Light with a high share of blue can affect our sleep and disrupt the body’s metabolic processes,” says Eva Knop. We go to bed later at night, sleep less, and less deeply, and our melatonin levels drop. Commonly known as the sleep hormone, melatonin is not only crucial for our sleep but also plays a role in our body’s natural defense against cancer. Whether too much artificial light is indeed linked to a higher likelihood of developing cancer is still unclear, though.

As yet, there are no specific laws that govern light pollution in Switzerland. The current legal framework is made up of the Environmental Protection Act and the Act on the Protection of Nature and Cultural Heritage as well as the recommendations issued by the Federal Office for the Environment’s for preventing light emissions. In recent years, however, several projects and guidelines have emerged thanks to the efforts of campaigners, municipalities, regions and organizations, such as Dark-Sky Switzerland. “People are becoming more and more aware of the issue,” says Eva Knop.

The main goal of these initiatives is to adapt light emissions to what is actually needed in terms of duration, area, intensity and also color, as well as to avoid direct upward light. When the municipality of Fläsch in the Grisons recently renewed its streetlights, for example, they deliberately chose not to light up sensitive structures such as the church tower, where a colony of mouse-eared bats gathers every spring. As the first dark-sky preserve in Switzerland, the Gantrisch Nature Park wants to raise awareness of the effects of artificial light on wildlife and enable visitors to experience natural darkness again.

Specific efforts to reduce light pollution are also under way in the canton of Zurich, where among other things the Building Department has been instructed to lay the legal groundwork for defining dark zones in the canton’s structure plan over the next two years. In 2004, Zurich was one of the first cities in Europe to introduce a lighting concept, dubbed Plan Lumière, aimed at coordinating how urban structures would be illuminated. At first these types of concepts were mainly used as a marketing tool for cities, but environmental and energy considerations have since become more important. And similar plans have since been adopted by a number of towns across Switzerland.

Light pollution has been increasing worldwide, including in Switzerland. The country’s steady urbanization is one of the main reasons for this development – as well as the shift to LED lighting, says UZH ecologist Eva Knop. There are fewer and fewer areas with natural darkness at night, while the areas that are illuminated are getting brighter and brighter. According to Knop, LED lights are a problem mainly because their short-wavelength blue light scatters into the atmosphere more easily than light from halogen or sodium vapor lamps, for instance, which were commonly used in streetlights and emit a more orange glow. In addition, since LED lights are more energy-efficient and affordable, people are also more likely to keep their garden or balcony lights on for longer than they used to.

Meanwhile, LED lighting, if used the right way, can go a long way toward preventing unwanted light emissions. It can be directed more accurately than light from other sources, switched on and off without delay, and its intensity and color are much easier to control. A few years ago, for example, the St. Gallen public utilities department installed a dynamic and intelligent LED light system along a quiet street outside of town. The lights not only register when somebody is approaching, but also recognize whether they’re on foot, on a bike or traveling by car. It automatically increases the brightness of two or more streetlights – lighting the way of the person approaching, so to speak – and then returns to its basic setting, which is bright enough for orientation, or goes into sleep mode and switches off.