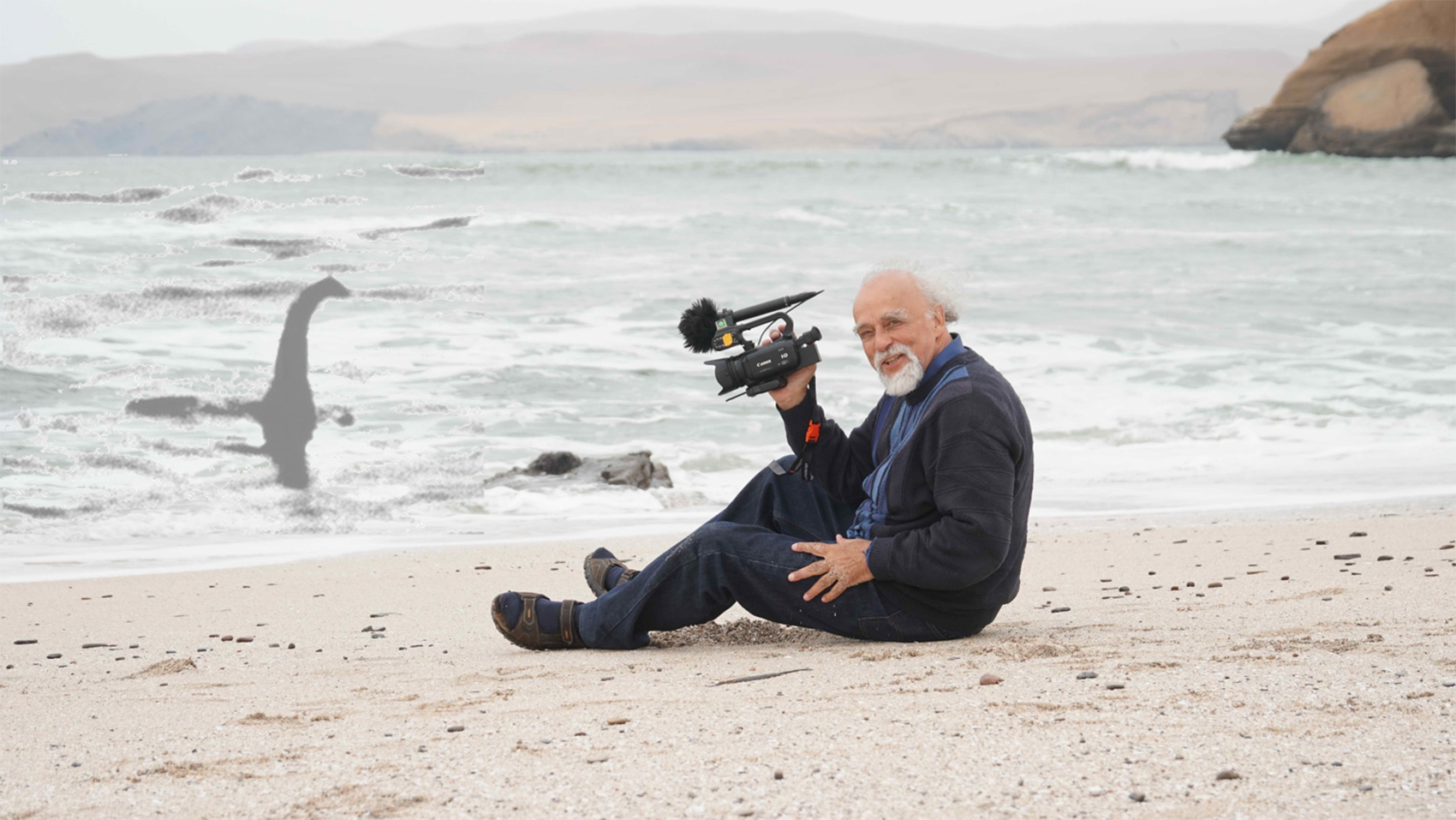 Heinz-Ulrich Reyer, zoologists publish many things, but books about mythical creatures aren’t usually among them. How did you come to write this book?
Heinz-Ulrich Reyer: Most mythical creatures are a combination of different animals – the griffin, for example, has a lion’s body and the head and wings of an eagle. In a way, my scientific work has also been about such hybrid species – specifically, the ecology, evolution and behavior of hybrids between different species of frog. After I retired as a professor in 2012, I left this frog’s-eye view and started looking into the literature on hybrid creatures more broadly, including the mythology, early traveler reports, cultural history and other areas.

At first I only did so out of interest. But then it occurred to me that all these different views on hybrid creatures really ought to be brought together and subjected to scientific analysis. And this idea ultimately led to my book Rendezvous der Fabelwesen – Drache, Einhorn & Co zwischen Mythos und Wirklichkeit [Meeting of the Mythical Creatures – Dragons, Unicorns & Co. between Myth and Reality].

What place do mythical creatures have in the history of science?
Reports of mythical creatures – whether taken from legends of indigenous peoples or from travelers’ early accounts of far-flung places – often led people to search for previously undiscovered animal species. One example is the platypus in Australia. When the first accounts of this egg-laying mammal with bird and reptilian characteristics reached Europe in the 18th century, people there didn’t believe them and thought the specimens had been faked by sewing a duck’s bill onto a beaver-like animal.

In most cases, the search for mythical creatures ended in failure, for example German animal dealer Carl Hagenbeck’s unsuccessful quest to find the mythical mokele-mbembe in the swamps of central Africa. He thought the creature was some kind of surviving dinosaur and sent an actual expedition hoping to capture and sell them to zoos for a profit. Extensive searches for mermaids, yetis, Bigfoot, the Loch Ness monster and other popular mythical creatures haven’t come up with anything. But these kinds of expeditions often led to the discovery of other previously unknown species.

When were the first mythical creatures mentioned? And why?
Mythical creatures are as old as time, but it’s not possible to pinpoint an exact date – not only because there are no written documents, but also because we can’t say which creature was the first. The oldest depiction of a hybrid creature I can think of is the lion man: A 30cm figurine, carved out of mammoth ivory, featuring the body of a human and the head of a lion. It was found in a cave near Ulm and is about 40,000 years old. It’s not known why the figurine was carved and what it’s supposed to represent – possibly a shaman whose soul had slipped into the body of a lion.

Most people are familiar with these creatures from stories and legends – what role do they play there?
Just like gods, demons and spirits, mythical creatures represent explanations for things that people in the past couldn’t properly understand, such as the origins of life, the passing of the seasons, or the change between day and night. The creation myths of many indigenous peoples perfectly illustrate this.

In Australian Aboriginal culture, for example, the origin of the world and all of life can be explained by the activities of the rainbow serpent Ungud, while in the beliefs of the San people in southern Africa, this role is held by the mantis /Kaggen. According to Native American Hopi mythology, the sun god Tawa imagined all beings, whereupon “spider woman” Kokyangwuti formed the creatures from saliva and earth. And in Norse mythology, the first god Búri was licked out of a salty block of ice by the primeval cow Auðumbla. 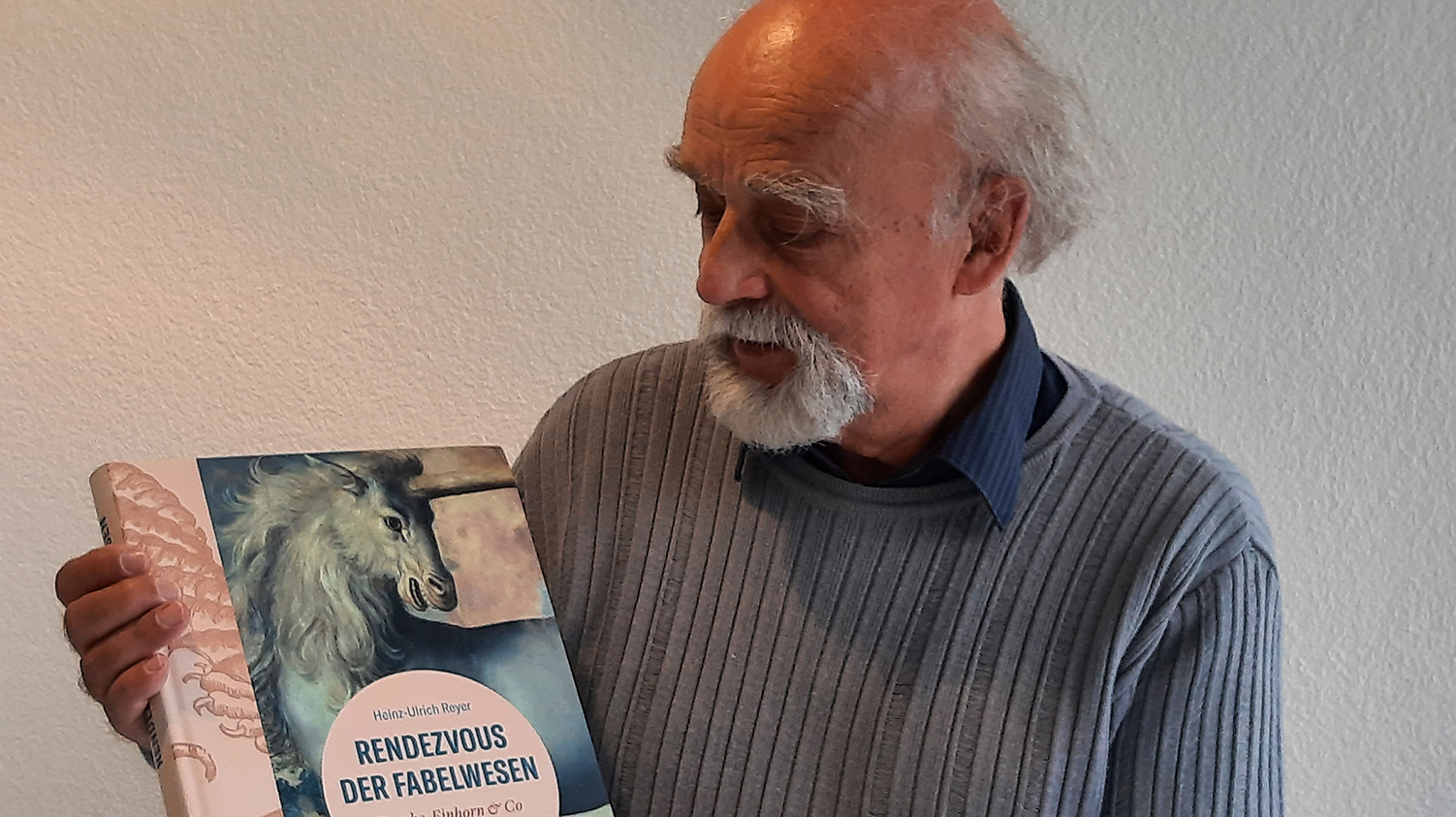 Mythical creatures fascinate us precisely because there is no proof of their existence, says Heinz-Ulrich Reyer. (Picture used with permission)

Why do these fantastical creatures continue to fascinate us?
I think a major reason for this is that there is no evidence whatsoever that they really exist. Neither their origin nor true nature are known. As Albert Einstein put it, “The most beautiful thing we can experience is the mysterious.” Since actual mythical creatures have yet to be found, their mystery is kept alive. And because they are imaginary creatures, their existence can’t be disproved either. Besides stoking our fascination for the mysterious, these creatures also continue to fulfill their traditional role as representations of things that have moved us since the dawn of time – emotions such as love, jealousy, hatred, courage and fear, but also catastrophes such as earthquakes, volcanic eruptions, hurricanes, floods and other natural disasters. These emotions and threats are timeless, and so are the mythical creatures that represent them.

The unicorn is probably the most popular mythical creature nowadays. Can you imagine why?
Not really, but I suspect there’s more than one reason. The history of the unicorn is very varied. In ancient China, the unicorn-like qilin, together with the dragon long, the tortoise gui and the phoenix fenghuang, was considered one of the four Chinese spiritual animals. They were revered as gentle and benevolent creatures. Early reports by travelers, in contrast, told stories of a strong, wild and aggressive animal. In Christian Medieval times, its strength turned into a symbol of Jesus Christ triumphing over death, with the horn representing the cross on which he died. The horse-like animal’s grace came to symbolize chastity and the immaculate conception.
Doctors and alchemists, in turn, focused on its horn, which – when ground to a powder – was said to be able to cure disease, neutralize toxins, and help transform base metals into noble metals. This diverse symbolism means that there are very different reasons for their ongoing popularity. A unicorn in a family or town crest symbolizes strength, while in esoteric circles, unicorns are considered power animals that have healing properties. In the LGBTQ community, they represent diversity and tolerance – often in combination with rainbows – and many children probably just like them because they’re often shown as cute fluffy horses.

The unicorn is an example of a mythical creature with a very long history. Are there also new mythical creatures?
Yes, new mythical creatures appear all the time. Just think of cyborgs, robots, androids and other human-machine-hybrids in science fiction, or aliens such as ET, gremlins and reptilian humanoids, or some of the creatures in the Harry Potter and The Lord of the Rings books. New mythical animal hybrids also keep being “discovered” – for example, at the end of the 20th century in the Caribbean and Central and South America, where there was a sudden increase in sightings of hairless, dog-like monsters with large hypnotic eyes, sharp fangs, unusually long claws, spines on their back and the ability to camouflage like a chameleon.
The creature was believed to suck the blood of goats and sheep, so it was named chupacabra, which translates from Spanish as “goat sucker”. In reality, the odd-looking animals turned out to be mange-infested, deformed dogs, wolves, foxes or coyotes, but the belief that the chupacabra exists quickly spread and is now firmly established – not least thanks to the internet.

What’s your favorite mythical creature?
I think that would be Nessie, the Loch Ness monster in Scotland. It may not be the most original choice, but it’s such a good example of the contradictions in play. There is no scientific evidence whatsoever that the monster actually exists, no irrefutable film footage, no photograph that hasn’t been faked – and yet, there are thousands, perhaps tens of thousands of people who claim to have seen Nessie. This contradiction illustrates how, despite all their capacity to reason, people have a tendency to keep making irrational assumptions – as we have just seen again with conspiracy theories during the coronavirus pandemic.

The winner is Astrid Dietz, congratulations!

1: Answer b. The Catholic Church in the 16th century believed the phallic horn had a sexual connotation. The belief that unicorns are real and that powdered unicorn horns have healing properties persisted in many circles until the 19th century – not least because narwhal tusks were often believed to be unicorn horns.

2: Answer a. The hydra was known to Gessner only as a creature of Greek mythology, unlike the sea devil, for which he cited an account that alleged such a creature had been captured in the Adriatic Sea in the early 15th century.

3: Answer b. The bats are named after the mythical undead creatures. Vampire bats are only found in Central and South America, so tales about these animals could only have come to Europe with the Spanish conquistadors in the 16th century. Legends about vampires existed long before that, though.

4: Answer b. For the Catholic Church, basilisks were the embodiment of sin, including the sin of lust, which is why the creatures were quickly linked to the sexually transmitted disease.

5: Answer b. Common flying dragons are real lizards in the Agamidae family that can glide between trees using wing-like lateral extensions of skin. Nectar-sipping gimps, of course, are an invention of Scottish paleontologist Dougal Dixon, the father of speculative zoology.

6: Answer b. Falcons have excellent eyesight and are considered fast, determined and aggressive predators – all fitting attributes for the mighty god Horus. The head of the jackal belongs Anubis, the god of the dead.