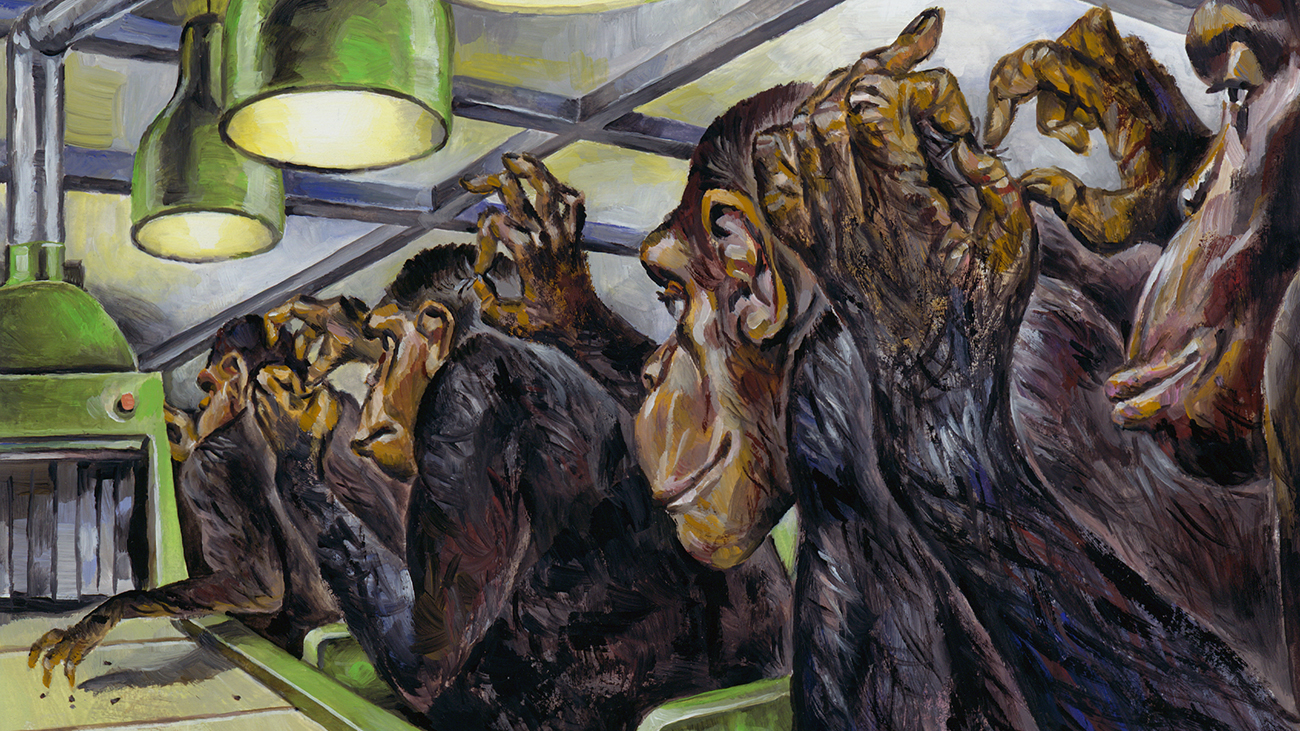 Apes cement relationships by grooming. We humans can't de-louse each other anymore, so we have other ways of cultivating social bonds. A good gossip is one of these. (Illustration: Yves Noyau)

This story about humans begins with the apes. Or, more specifically, with the great apes, the chimpanzees and bonobos who are our closest relatives. They love to race through forests in huge groups, which can mean up to 200 chimpanzees at a time in the wild, according to anthropologist Kathelijne Koops.

There may also be as few as 20. Scientists refer to this form of cohabitation as an open fission-fusion society, in which the size and composition of social groups changes constantly. With the great apes, this depends on factors such as how much food is available and how dangerous and numerous their enemies are. Other intelligent creatures such as dolphins also display this form of social flexibility.

Koops studies great apes to learn more about their social behaviors, which are similar in many ways to our own. Her observations can therefore offer clues as to how human behavioral patterns have evolved. As an example, our ape cousins band together for the same reason our ancestors did.

It increases their chances of survival or, in Darwinian terms, their fitness. “There are huge advantages to life in a group,” Koops explains. “It makes it easier to find food, or recognize enemies and defend yourselves against them.” After all, apes are still living by the same rules as our stone-age forebears. “If you run into your neighbors when you're alone, they might well kill you.”

Relationships between apes are thus cemented most strongly by the very direct benefits they hold. These include support when there are conflicts within the group, or access to females on the strength of a good relationship with a higher-status male. Another key aspect here is being able to rely on and essentially get along with each other.
It is clear from Koops’ analysis that apes look for useful friends with certain benefits.

Humans are no different. We are brought and held together by shared interests and needs that are not just material, but also emotional. Sociologist Malte Döhne's work includes studying peer groups among young people. To him, there are essentially four things that we look for in our friends: Security, recognition, mutual validation, and new experiences. “The group chemistry will work if these needs can be satisfied,” Döhne says. When that stops being the case, we leave the group and seek another that is a better fit for us.

The striking thing about Döhne's list is that two of the four dimensions – recognition and mutual validation – are about being “seen” and accepted by others. For that to happen, we have to be wired in much the same way. As Döhne observes, birds of a feather really do flock together.

Like chimpanzees we function as part of different groups. These might be work, leisure or sport-related, and we play a different role in each, depending on the mix of people around us. As psychologist Johannes Ullrich puts it: “What we are is defined by those we are with. We are nothing without each other.” That applies equally to couples, families, friends and society as a whole.

These groups typically have hierarchies and pecking orders, just as apes do. These are sometimes overt, sometimes more subliminal. Chimpanzees, for example, enjoy more egalitarian relationships than gorillas, which are autocratic in their treatment of lower-status animals. They take advantage of their position by keeping the best things for themselves, such as the most nutritious food and sex with the females.

They may also terrorize subordinates with frequent attacks, as Kathelijne Koops explains. Chimpanzees are more tolerant of each other, and lower-status animals defend themselves and sometimes fight back. The bonobos are the most egalitarian of all. It is not unusual to have a female who is dominant in her own right, or equally as dominant as the males.

Relationships are vitally important, and never more so when one male challenges another and the support of a strong second can make all the difference. Bonobos therefore put enormous effort into nurturing social bonds through grooming, or de-lousing each other, which establishes and strengthens those relationships, Koops says. Since we humans can no longer de-louse each other, we cultivate our relationships in other ways. As with apes, one of these is personal interaction, albeit verbally rather than through touch. A good gossip is one example.

Life together has many advantages for apes and humans alike, but it also breeds conflict. Apes fight over resources such as food, or who is permitted to mate with the females. While humans similarly compete for their share of resources, they also clash on non-material issues such as personal freedoms and social solidarity. The pandemic threw these differences into sharp relief, highlighting the gulf between those who follow government guidelines, and those who refuse.

Disagreements like these are part and parcel of political life, but Johannes Ullrich is concerned by the aggression on view in the coronavirus debate. The topic has dominated public discourse in recent years, and Ullrich believes that is why positions have become so immovable. “We have seen society's needs and consciousness focused entirely on one issue,” he explains. “Opinions have crystallized into two irreconcilable camps.”

That is unusual, he continues, because political preferences usually intermingle and overlap. Discussions about the framework agreement with the EU are one example here, in which supporters and opponents with very different motives can be found from left to right across the political spectrum. That prevents things becoming too polarized.

Being unable to meet in person for so long is a factor in such entrenched positions, in Ullrich's view. “We didn't have that human contact – those face-to-face meetings with their 360-degree perspective. A flat screen can't replicate that.” Conversation flows easily when we meet in real life. With friends, especially, we get a feel for all of the things that we share and that connect us, even if we disagree on how to tackle the pandemic. That creates familiarity and trust, which Ullrich describes as the lubricants of our personal relationships and of society as a whole.

So how can we mend the relationships that Covid has so strained? We could learn from apes here, in the way they behave after a confrontation. Kathelijne Koops: “They try to be close to their former adversary, although that takes some bravery because it's not always clear how the other ape will react.” Once allowed into personal space, the apes pat each other on the shoulder or begin to groom.

They do not always reconcile, however. The value of the relationship determines whether they make up or not, and how important it is to them. “We humans are the same. It's more important to us to resolve things with good friends than with a random person we meet on the street,” she says. In some cases apes will simply ignore each other and stay out of each other's way after a fight. Again, we're no different. Malte Döhne points out that it is easier for us to let go of casual friendships that mean less to us. “And the measure of a good friendship is how we deal with conflict.”

Fixing the cracks in society following the pandemic will not be an easy task, but if rebuilding work is to succeed it has to have a personal foundation. “We must all try to work on relationships at the individual level,” says Döhne. Johannes Ullrich advises making friendly advances to your neighbor again. Studies have shown that direct contact breaks down prejudice and helps to build social bonds, even if people are not particularly close. So what about those we love? Invite them to dinner, Ullrich suggests. It is an opportunity to put the world to rights over a glass of wine and to rediscover how much we have in common, instead of getting worked up over disembodied digital messaging.