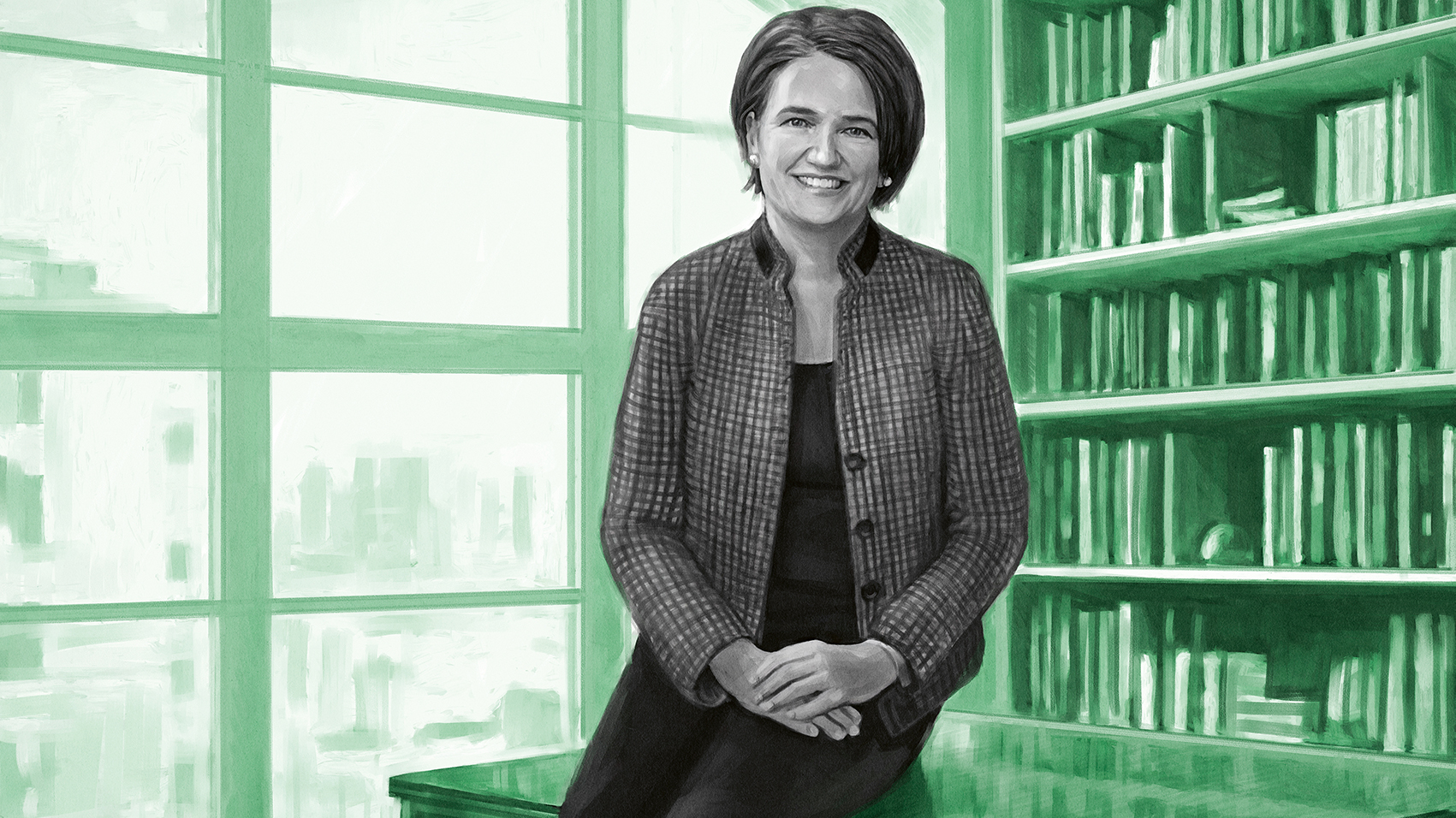 Denise Schmid was the first co-president of the umbrella organization UZH Alumni, which was founded in 2017. Today, she works as a writer and publisher. (Illustration: Roost & Hausheer)

It all started with a seemingly random decision, which turned out to have a profound effect on the course of her life: In 2013, Denise Schmid was asked whether she would like to take on the role as president of ZUNIV, the Alumni Association of the University of Zurich. ZUNIV, founded in 1883, was the oldest and largest alumni organization at the University of Zurich. “The board thought it was time for a female president,” Schmid recalls, “and they were also looking for someone with a background in communications.”

Schmid, who at the time was managing her own corporate publishing agency, met both criteria. And yet, she was a bit apprehensive at first, as she now admits. “The ZUNIV board included many professors. I didn’t even hold a PhD.” But one of her friends told her: “They have skills that you don’t have. But you have skills that they don’t have.”

Getting all alumni on board

With these words of encouragement, Denise Schmid decided to take the leap. She took the reins of an association that while established, was also rather set in its ways – “the website was very basic, and the published materials were a little dated” – and she threw herself into her new job. Her workload soon took up more time than the one day per week that she had anticipated. But it was clear to her that if she wanted to change things, she had to invest the time.

The idea for the big change that would result in lots of work ultimately came from then-UZH president Michael Hengartner. He had suggested merging ZUNIV with the umbrella organization for alumni associations representing various subject areas. “It was a very time-consuming project,” says Schmid, thinking back, “but we told ourselves we simply had to brave it out.” So she went to work, together with Peter Isler, who was president of Alumni UZH, and the support of a working group. The project meant drawing up new structures and getting all of the 27 existing alumni associations on board. The merger succeeded, and the new umbrella organization UZH Alumni was founded in 2017, with Schmid and Isler heading up the new organization as co-presidents for one year.

Biography of UZH professor of medicine

Heading up ZUNIV wasn’t only a challenging, unpaid role, but also opened many a door for Denise Schmid. It also ended up giving her life a new direction. During her time at ZUNIV, she met professor emerita Ruth Gattiker. The retired anesthesiologist was one of the first female professors of medicine at UZH. “I happened to sit next to her during a dinner event with the Research Talent Development Fund,” says Schmid. “She started telling me about her life, and I was fascinated.”

Schmid later visited Gattiker in Davos, wrote a portrait about her, and realized that the retired professor’s life was interesting enough to write a biography. Her search for a publishing house led her to “Hier und Jetzt”. Denise Schmid’s work on the book also ended up being a springboard for her career: The biography Ruth Gattiker. Pionierin der Herzanästhesie was published in 2016. In the same year, Schmid also joined Hier und Jetzt as a publisher.

Schmid finally realized she preferred writing books to her job in corporate publishing while working on a book on the Zurich Opera House under general director Alexander Pereira, which was published in 2012. “It was like a dream. For two years I went in and out of the opera house, was able to speak with everybody, from directors to famous sopranos.”
At the same time, she found that her own business, which mainly involved working for clients in the insurance industry, had turned a bit stale. “I was in my mid 40s and asked myself: You studied history and English literature and linguistics. Now you’re writing texts about pension funds. Do you really want to keep doing this?” Her answer was clear: “No, I’m done with corporate publishing.”

Today, Denise Schmid works as a publisher, and her job makes her happy. “We write history books that I as a reader also enjoy – books that aren’t academic, but rich in content and easy to read.” Hier und Jetzt isn’t a major player in publishing, but that’s exactly what Denise Schmid, who early in her career worked for Siemens and AXA Winterthur, likes about it. “I was never fully at ease in large organizations.”

Last year, she published Jeder Frau ihre Stimme. 50 Jahre Schweizer Frauengeschichte 1971–2021 to mark 50 years of women’s suffrage in Switzerland. This look into the past gave her pause to reflect on some of the choices she had made along the way: “I became a feminist during my time at university. But when we started a family, it was clear that I’d start working part time. Looking back, I have a hard time understanding why.” The main thing though was to stay in the game, she says today. Which she did, also thanks to her role at UZH Alumni. And it has been worth it – for both her and UZH.