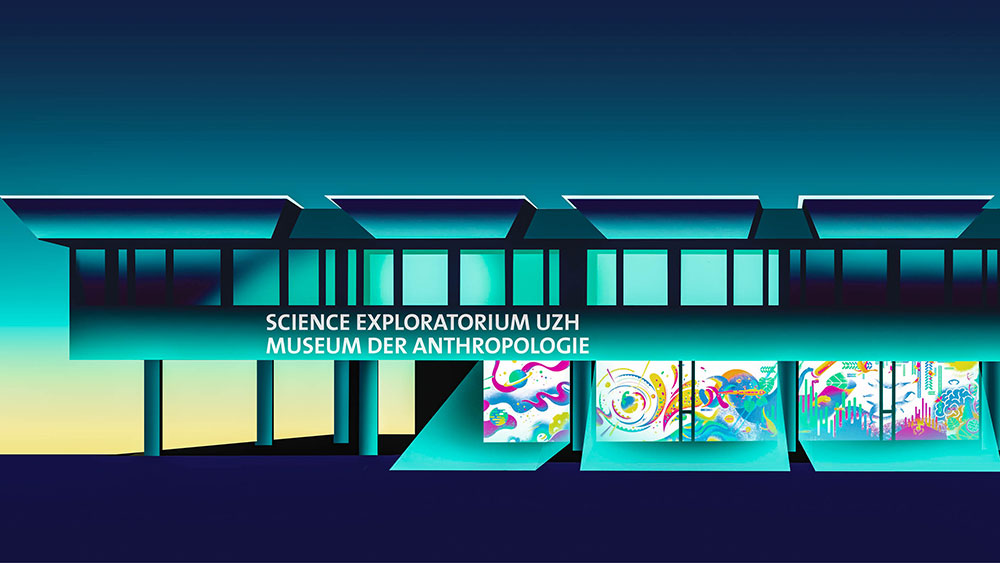 Galaxies, single-cell organisms, plants, vertebrates, dinosaurs, birds and mammals – the colorful illustrations in the display window of UZH’s recently opened Science Exploratorium wastes no time in transporting visitors to the world of the natural sciences. The illustrations also stand for the various disciplines of the Faculty of Science, which investigates the phenomena and laws of nature. “The UZH Science Exploratorium is way to make this diverse research visible and tangible to the public,” says Morana Mihaljević, who heads up the museum.

The Science Exploratorium on Irchel Campus can host five exhibitions at the same time. Using display walls, explanatory videos, life hacks and experiments, researchers from the Faculty of Science can present their research field or research projects. The subject matter has been specifically geared towards a wide audience. “We want to spark interest for the natural sciences, and the exhibitions are aimed at students, researchers as well as schoolchildren and the general public,” says Mihaljević. The plan is for exhibitions to change every six months.

The first of the exhibitions is hosted by the UZH Botanical Museum. It presents a selection of the most unusual objects and most exciting people from the research world of botany.  Exhibits include ethno- and archaeobotanical artifacts such as poison arrows from Africa, charred remains of grain found in pile dwellings or lovely papier-maché flower models which were used for teaching up until the 1990s.

Two of the five exhibitions shed light on the field particle physics. The exhibits on CERN present the work of researchers, including from UZH, who are investigating the very nature of matter using the Large Hadron Collider (LHC), the world’s largest particle accelerator. A 1:10-scale model shows visitors how particle collisions are observed with the LHC’s CMS detector and allows them to see the traces of particles at the push of a button.

The second particle physics exhibition showcases the XENON experiments carried out at the Gran Sasso underground laboratory in Italy. UZH has been involved in these experiments, which focus on the direct hunt for dark matter, since 2007. Among the exhibits on display is the core of the XENON detector – a time projection chamber. It used to be filled with 3.2 tons of liquid xenon and was in use until 2018. Key components of the time projection chamber were built at UZH’s Department of Physics.

Another exhibition explores high-temperature superconductivity. The University of Zurich has been a leader in this field since the Nobel Prize in Physics was awarded to Karl Alex Müller and Georg Bednorz in 1987 for their discovery of high-temperature superconductivity. Visitors can observe the effects of superconductivity up close through an explanatory video and a live experiment: If ceramic metal oxide is cooled to -196°C using liquid nitrogen, it can conduct electrical current without any resistance and start to levitate in a magnetic field.

Last but not least, the fifth exhibition is hosted by the Department of Geography and its CrowdWater project. The citizen science project lets voluntary participants get involved in recording water levels and other data in order to improve forecasting of hydrological events, such as droughts or floods. The exhibition provides potential citizen scientists with instructions on how they can take part in the project and collect water data, starting right outside the Science Exploratorium in Irchel Park.