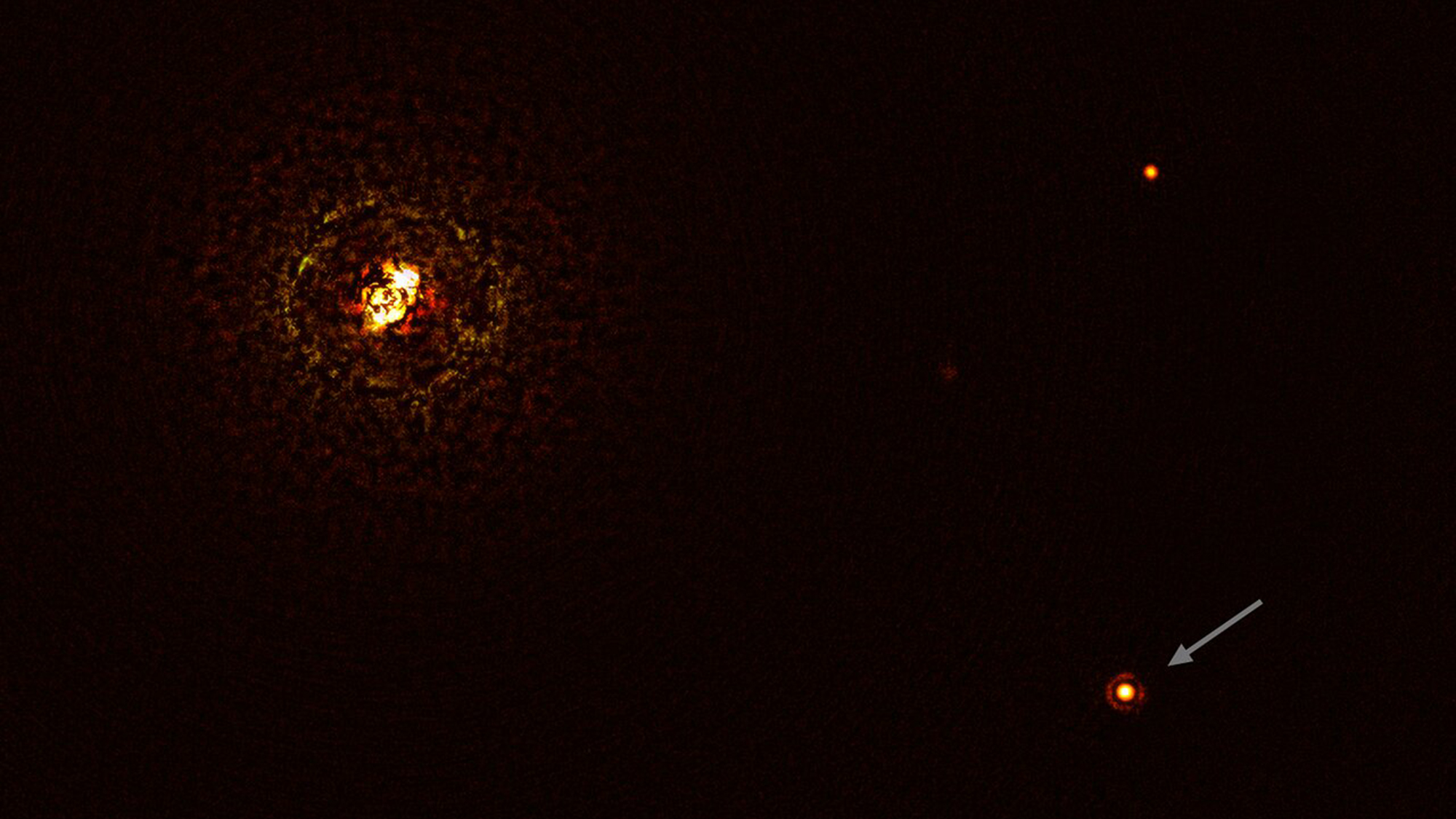 This image, taken with the SPHERE instrument on ESO’s Very Large Telescope, shows the massive star system, b Centauri, and its giant planet b Centauri b (noted by the arrow). The other bright dot in the image (top right) is a background star. (Image:ESO/Janson et al.)

Exoplanets are research objects full of surprises. Already the discovery of the first planet orbiting a star other than the Sun fundamentally changed the scientific understanding of planets. At the time, it was considered impossible that a giant planet like 51 Pegasi b could circle its star in such a narrow orbit. About 25 years later, a new discovery pushes common theories of planet formation to their limits. The corresponding study was published in the scientific journal Nature.

“So far, comparatively few planets have been discovered around stars with more than two solar masses,” Sascha Quanz, co-author of the study, professor of exoplanets at ETH Zurich and member of the NCCR PlanetS, begins to explain. “Earlier studies thus concluded that planet formation is hindered near more massive stars and that giant planets may even be impossible near stars with more than three solar masses,” Quanz adds.

According to the researcher, there are several reasons for this. For example, massive stars with their strong gravitation absorb practically all the matter in their environment during their formation. Therefore, hardly anything remains for any potential planets. Large stars are also usually very hot and emit large amounts of ultraviolet and X-ray radiation. This high-energy radiation causes the little remaining matter in the environment to evaporate quickly.

“Such stars are generally considered to be quite destructive and dangerous environments in which large planets are unlikely to form,” adds Markus Janson, professor of astronomy at Stockholm University and lead author of the study.

A system of superlatives

Yet in the b Centauri system, about 325 light years from Earth, other rules seem to apply. The system, consisting of two stars, has at least six times the mass of the sun and is more than three times as hot. Nevertheless, it is home to b Centauri b, one of the most massive planets ever discovered – around 10 times as massive as Jupiter. This planet also orbits its stars in one of the farthest orbits discovered so far, with more than 500 times the radius of the Earth’s orbit around the Sun.

This image, taken with the SPHERE instrument on ESO’s Very Large Telescope, shows the massive star system, b Centauri, and its giant planet b Centauri b (noted by the arrow). The other bright dot in the image (top right) is a background star. Credit: ESO/Janson et al.

“This large distance from the central pair of stars and the associated reduced irradiation could have been the key to the planet's survival,” suggests study co-author Lucio Mayer. But how the planet could have formed in the first place is still unclear, according to the NCCR PlanetS member and astrophysics professor at the University of Zurich. “Some evidence suggests that the planet did not form by the popular accretion method, in which – to put it simply – solid bodies grow into a planet over time by gradual accumulation. But we cannot yet say whether it was formed by the so-called gravitational instability mechanism, in which clouds of matter collapse under their own gravity, or in some other way,” Mayer says.

“The discovery of a planet around b Centauri with the high-contrast SPHERE instrument on the Very Large Telescope (VLT) of the European Southern Observatory (ESO) in Chile was very exciting, as it completely changes our view of massive stars as planet hosts,” Markus Janson explains. With the help of ESO’s Extremely Large Telescope (ELT), which is scheduled to start observing later this decade, and the upgrade of the VLT, astronomers hope to find out more about the formation and properties of this planet. “It will be a fascinating task to find out how this planet might have formed and what that means for our understanding of planet formation in general,” Janson concludes.