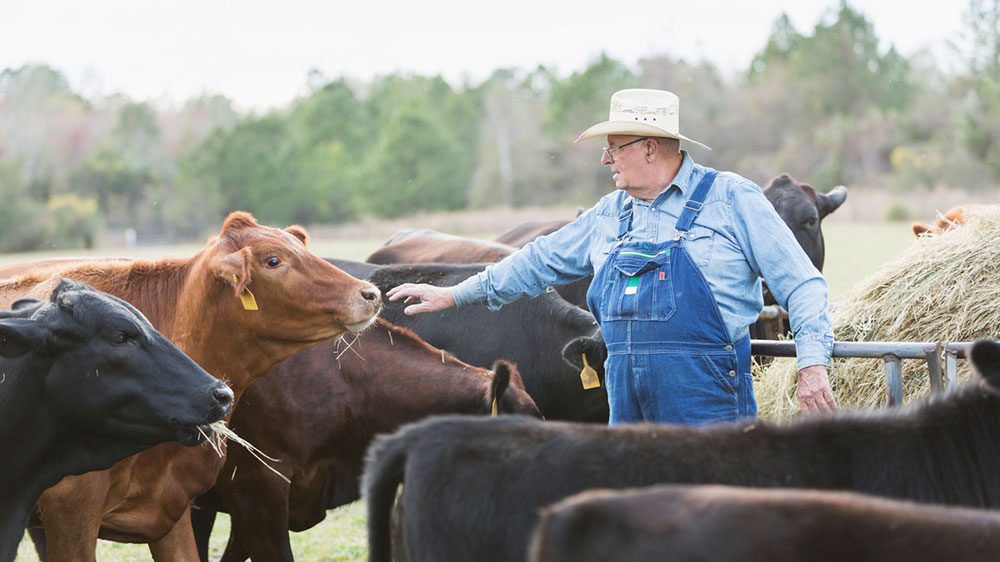 Batmanbaby mit Bulldogge
In contrast to the USA, the use of antibiotics to promote performance is prohibited in Switzerland. (Image: iStock / kali)

Flurin Condrau, Roger Stephan, the coronavirus pandemic was probably caused by a virus transmitted from animals to humans, showing us just how close the connection is between animal and human health. Your research takes place at this intersection. The combination of animal and human medicine is today called One Health. Why is this holistic research approach needed?

Flurin Condrau: The term One Health is relatively new, but the thinking behind it is old. We can find evidence of it as far back as Greek and Roman antiquity. The Greek physician Galen of Pergamon, for example, didn’t differentiate between animals and humans. His theory of the four humors applied to both. This joined-up thinking in medicine continued until the 18th century.

Roger Stephan: Ever since humans and animals have lived in close proximity, there have been diseases that affect both or that are transmitted from one species to another. You cannot solve such health problems by considering them from only one perspective. An important driver of the development of One Health thinking in modern times was German pathologist Rudolf Virchow (1821–1902), who researched parasitic diseases in the 19th century. He demonstrated the connection between pigs, pork and the human disease trichinosis, which is caused by the Trichinella parasite. Trichinella are microscopic tapeworms that can be transmitted to humans through infected pork. A more recent boost for One Health came from an international conference in New Delhi in 2007. Held against the backdrop of the raging bird flu outbreak, the conference made it clear that such public health challenges could only be managed if veterinary and human medicine worked together.

Condrau: Parallels are often drawn between Covid-19 and the Spanish flu pandemic of 1918. Interestingly, Spanish flu also influenced the One Health approach. At the time there was much speculation about the initial cause of the Spanish flu outbreak. But the virus that triggered the influenza was not discovered until the 1930s. For a long time it was assumed that the virus was transmitted from person to person. Then in the 1970s, scientists realized that it had been a case of zoonosis: The influenza viruses jumped from animals to humans. With this discovery, it became more important than ever that pandemic planning must take into account the role of animals. And yet even today, traditions persist that impede collaboration between veterinary and human medicine. In the discipline of human medicine in particular, walls have been built that are difficult to penetrate.

Condrau: That’s true. Veterinarians would have lots of expertise to share – for example with the obligation to register animal diseases. They have the experience and the technological tools to uncover epizootic diseases. The Federal Office of Public Health, in contrast, was stuck in the 1980s technology-wise – at the start of the current crisis, Covid cases were still being reported by fax! Veterinary medicine has a great deal of know-how in the area of identifying and planning for pandemics, and that knowledge will be important in the future. We’re now at the stage where we can begin learning lessons from the handling of the pandemic. One of those lessons is that panels of experts should be assembled before a pandemic breaks out, and not in the midst of a crisis. Another is that veterinarians should be among those experts: After all, in order to understand zoonoses such as the coronavirus, we need knowledge from human and veterinary medicine.

There are three topics of particular importance in One Health research: Zoonoses, antibiotic resistances, and food safety. Why those three?

Condrau: The close connections between animals and humans, agriculture, environment, veterinary medicine and human medicine are most apparent within these topics. Zoonotic pathogens are transmitted directly or indirectly from animals to humans, and the food chain acts as a hub for such transmission. Likewise, antibiotic-resistant bacteria circulate between humans, animals and the environment. Regarding pharmaceutical drugs, people often think it can’t hurt to try something, even if it doesn’t work. But with antibiotics that’s definitely not true, because using them encourages the formation of resistant bacteria in all areas – in humans, animals and the environment.

Let’s stay with antibiotics for now: For a long time they were used to enhance animal feed and increase production. In the meantime we’ve discovered that this causes problems, and in Switzerland at least, the practice was discontinued over 20 years ago. Is enough being done in agriculture today to reduce antibiotic use?

Condrau: Since the Second World War, livestock farming has been all about maximizing efficiency and yields. That’s one of the main reasons for the widespread use of antibiotics. In Switzerland too, healthy animals used to be administered antibiotics across the board to improve production. In 1956, for example, it was 56 tonnes per year. The use of antibiotics for enhancement is no longer permitted in Switzerland, unlike in the USA. So the juicy American rib-eye steak you enjoy can still be produced with the help of antibiotics. One thing is clear: Drug resistance is a classic One Health problem that can only be solved if veterinary medicine is included and takes part in the discussion. But in the farming industry, veterinary medicine is still focused on performance and helping farmers maximize yields.

Stephan: In my view, there’s not enough investment in prevention measures for animal health. In Switzerland it is still difficult to cover the costs of preventive veterinary work in agricultural settings. All too often treatment is not sought until the animals are sick, and they then require antibiotics, for example. That’s why we need a system of incentives to encourage prevention and thus promote animal health. This could be through subsidies, for example.

What form do you imagine it could take?

Stephan: Animal health should be a criterion in granting subsidies. It could be measured in part by looking at how many antibiotics are used on a farm. If the animals are healthy, antibiotic use will be lower.

What can we as individuals do to prevent the formation of antibiotic resistances?

Stephan: Consumers play an important role, especially when it comes to food production. High standards in the area of animal protection, clear product labeling in animal feed, investment in preventive measures for livestock: All these things cost money. Consumers must be prepared to bear some of these costs in their grocery shopping.

Condrau: I think complete transparency is important. Meat-eaters should visit the slaughterhouse so they are aware of what they are eating. And the data collected from farmers about antibiotic use should be published. Consumers need to know what is produced where and under what conditions.

Flurin Condrau, as a medical historian you research the history of One Health. What is it that interests you?

Condrau: It’s not possible to research recent medical history without looking at One Health. It is important to understand how veterinary medicine found its way into farms and the role it plays in agriculture. As I mentioned, it is used not just as therapeutic medicine but also as a means of maximizing production. An example of this is Optigal, the chicken brand of Migros supermarkets. In the 1960s, Optigal used findings from scientific research to optimize its chicken feed. They made it seem that they were concerned with animal-friendly husbandry, when actually the main goal was to increase production. We need to be aware that the use of antibiotics is not only a problem because of resistances. It also affects agricultural products.

Roger Stephan, research in the area of One Health is one of UZH’s strategic principles. What specifically is being done?

Stephan: We have introduced a revised curriculum at the Vetsuisse Faculty in the current Fall Semester. In this new curriculum, the One Health concept is firmly anchored in the Master’s degree program as a taught module with selected case studies. That’s the first focal point. We are also networking in this area with the aim of creating interdisciplinary courses in conjunction with other faculties. And we are trying to develop a strong interdisciplinary group to put forward a competitive proposal for a new University Research Priority Program “One Health” in the next round of calls.

Condrau: A fundamental problem is that the majority of medical research is focused on treating disease. That’s where the most money goes too. But prevention is just as vital. If we can prevent animals and humans from getting sick in the first place, then no treatment is needed. And yet budgets for prevention measures are far too low. There has been no large-scale prevention campaign in Switzerland since the Aids campaign last century, and we now lack the know-how and infrastructure for such a campaign. We saw that in the coronavirus pandemic. If we learn one lesson from this pandemic, it must be to rethink prevention in healthcare.

Condrau: Health has been very broadly defined by the WHO since 1948: It is more than the absence of disease; it is a state of complete physical, mental and social wellbeing. In the human rights arena, there have also been intensive discussions about whether people have a right to health. Access to medical treatment is certainly part of the picture, but the core issue is actually healthcare as a prerequisite for participation in the economy and society. Thus it seems to me that improving health protection for humans and animals is key, as it lays the foundations for good health.

How can One Health research contribute to solving future health problems of humans and animals?

Stephan: One Health researches the links between humans, animals and the environment. Only by understanding what is going on at this interface, for example how a pathogen is transmitted from animal to human or how harmful germs circulate between animals, people and the environment, can we intervene in a useful and targeted manner. That’s our goal at the end of the day: To provide the knowledge necessary to be able to act in the right place with the best and most efficient means. For example to be able to better inhibit the spread of antibiotic-resistant bacteria.

Condrau: As I mentioned, for me it is important that the therapeutic focus of medicine is widened to include new prevention measures. One Health can play a significant role there, because it brings other players to the table. If it’s true that veterinary medicine is a performance medicine, then that’s probably true for human medicine too. Both seem problematic to me. One function of the discipline of medical humanities is to think more broadly about health and sickness. The political dimensions of health policies have been on the radar of medical historians for 100 years. So I believe social sciences and humanities must also have a seat at the table when we talk about the future of medicine.