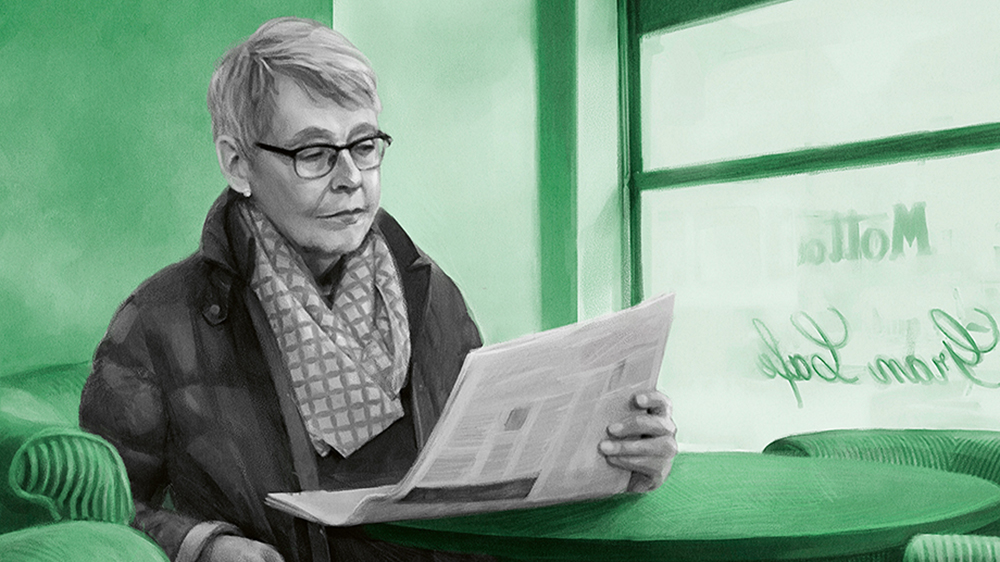 I meet Klara Obermüller on the terrace of the Gran Café Motta on Limmatquai, the traditional spot for people-watching in the heart of Zurich. It doesn’t disappoint on this sunny October afternoon as the city’s citizens parade past us. Obermüller, who has long been a familiar figure on the Swiss cultural scene and was last year awarded the Zurich Journalism Prize for her complete works, no longer has to worry about being seen. Seeing, on the other hand, interests her more than ever. Just recently, following an eye operation, she had to learn what it means to be unable to read or write for weeks on end. “Fortunately everything is fine again now,” she says.

Klara Obermüller, who turned 80 earlier this year, airily dismisses the tiresome topic of old age and instead brings up her memories. In her Venetian diary Die Glocken von San Pantalon [the bells of San Pantalon], published this year, she takes a retrospective meander through time. And because she has been dealing with her past, her experiences, her ups and downs, in her writing for a few years now, talking about her younger self comes easily.

“So you want to know about my time at uni?” Klara Obermüller laughs: “At first I was completely lost!” Her decision to enroll for a degree in German and French language and literature in 1959 was initially nothing more than a stopgap solution. “I had absolutely no idea what I could do for a career.” At the Höhere Töchterschule in Zurich (now the Kantonsschule Hohe Promenade) the female teachers were still called “Fräulein Doktor” and were all single and childless. The schoolgirls were coached for high achievement and educated to join the next elite. But they were not prepared for the total academic freedom and substantial lack of structure that prevailed at the university at the time. The 19-year-old new student felt overwhelmed, and suffered nightmares. “Even today I still see myself rushing through the university, terrified of not finding the right room, ending up in the wrong lecture or not getting a seat in the lecture hall.”

In the 1960s, the Department of German Studies was also hugely overcrowded due to the draw of literary scholar and star Germanist Emil Staiger, at the time a well-known figure in academic and cultural circles. His “11 o’clock lectures” on literature, art, music and theater were intellectual events to which students, alumni and the general public flocked in droves. “Although his tone and gestures were always a touch too solemn for me, with Staiger I learned to read thoroughly and attentively and to listen carefully to the poetry of a text. This method of work-immanent interpretation was very useful to me later on in my work as an arts and culture critic.”

Staiger was already supervising 70 doctoral candidates, so Obermüller decided to seek out a professor who would have more time for her: Max Wehrli, expert on German literature from its beginnings to 1700. Klara Obermüller writes in her life review Spurensuche [searching for traces], published in 2016, that with the topic of her dissertation, melancholy in German Baroque poetry, Max Wehrli had “set me a task that suited my interest in psychological and philosophical questions that went far beyond the literary. But how all this knowledge was ever to be applied in a suitable career was completely beyond me.”

In fact, she ended up arriving at journalism more or less by chance. A fellow student helped her to arrange an internship at the internationally renowned art and culture magazine Du. She instinctively sensed that her life had just taken a decisive turn, says Obermüller. The planned doctoral thesis was put on hold without further ado as “the most important years of my professional career began”. During this time, which she describes in detail in Spurensuche, she saw her first article printed, ate her first caviar, drank her first absinthe, shook hands with her first aristocrat and took her first major reporting trip. “I was like a sponge, soaking up everything I could.”

She did, nevertheless, quit the editorial office to finally complete her thesis and sit the university exams. By then married and needing to earn money, she took a part-time position with Neue Zürcher Zeitung and spent her mornings writing book reviews and her afternoons grappling with the fluctuating uses of the term melancholy in various disciplines. “In retrospect, I am glad that I did not drop out of my studies,” says Klara Obermüller at our meeting. “As a woman, it has on occasion been helpful to play the doctor card.”

She then rapidly rose up the career ladder at NZZ, but once again left the newspaper – not entirely voluntarily – due to her relationship with the writer Matthias Diggelmann, who was seen as a left-wing radical. So she set up as a freelance journalist, writing for women’s magazines and for the Frankfurter Allgemeine Zeitung arts pages under the editorship of Marcel Reich-Ranicki. Later she became a jury member for the Ingeborg Bachmann competition and critic at the Literarische Quartett. When she joined the editorial staff of Weltwoche in 1980, she began exploring new socio-political topics beyond the boundaries of her own department: Aids, anti-Semitism, the Catholic Church, among others. “At Weltwoche I had the feeling that my writing was making a difference for the first time.” In 2010 Klara Obermüller was awarded an honorary doctorate by the Faculty of Theology for her “service performed through her literary and journalistic work on issues of social justice, religion and acceptance of minorities”.

While some people begin to wind down years before pensionable age, Obermüller instead chose to take on a big new challenge at the end of her career: As presenter of the SRF program “Sternstunde Philosophie” for six years, she interviewed an array of writers, scientists, politicians and Nobel laureates.

Gradually Klara Obermüller comes to the end of her story. “Have you heard enough?” she asks amiably. No, actually I could keep listening for much longer to this fascinating woman whose influence on the Swiss literary and journalistic scene over the last 50 years has been so considerable. But it’s getting cold on the terrace, so we agree to call it a day. The gaps, details and questions can be filled in by reading her autobiography Spurensuche. (Spurensuche, Xanthippe Verlag Zürich, 2016)