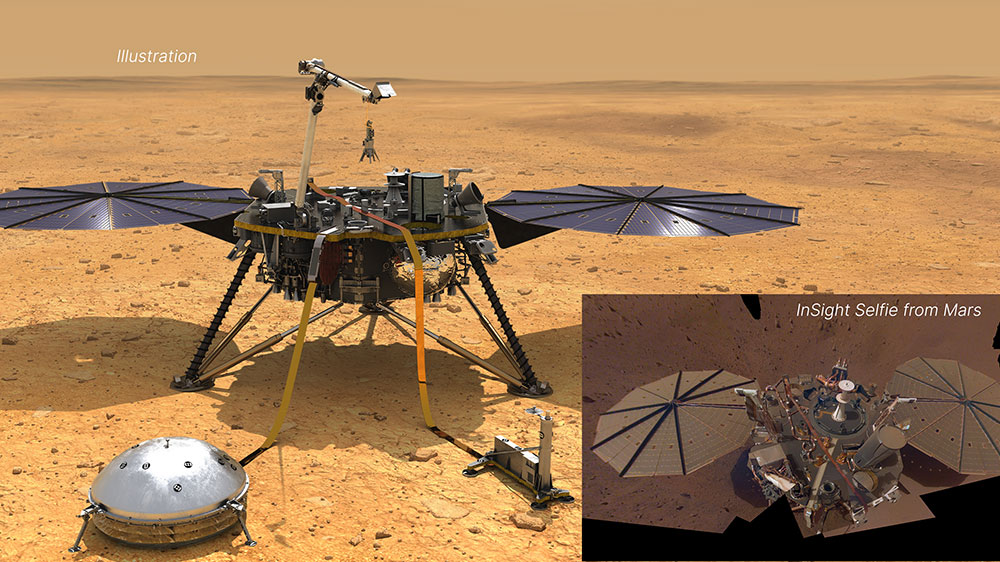 Sonde in der Nähe des Marsäquators
This impression shows NASA's InSight lander after it has deployed its instruments on the surface of Mars. The small image on the right is a selfie the lander took of itself. (Image: NASA/ JPL-Caltech)

We know that Earth is made up of layers: a thin crust of light, solid rock surrounds a thick mantle of heavy, viscous rock, which in turn envelopes a core consisting mainly of iron and nickel. Mars has been assumed to have a similar structure. “Now seismic data has confirmed our view that Mars is a differentiated planet that presumably was once completely molten before differentiating into crust, mantle and core – that are compositionally distinct like in the Earth,” says Amir Khan, a scientist at the Institute of Geophysics at ETH Zurich and at the Physics Institute at the University of Zurich. Together with his ETH colleague Simon Stähler and an international team, he analysed data from NASA’s InSight mission, in which ETH Zurich is participating under the leadership of Professor Domenico Giardini.

The researchers’ results are published today in three papers in the journal Science. They report that the Martian crust underneath InSight near the Martian equator is 25–45 kilometres thick, similar to the crust below Western Europe. Below this lies the mantle with a lithosphere of solid rock that is much thicker than Earth’s: on Mars, this layer reaches a depth of 400–600 kilometres; on Earth, it is at most 250 kilometres deep. This could explain why there is no evidence of plate tectonics on Mars. The planet seems to consist of a single plate, in contrast to Earth with its seven large continental plates. “The thick lithosphere fits well with this model of Mars as a ‘one-plate planet’,” Khan concludes. 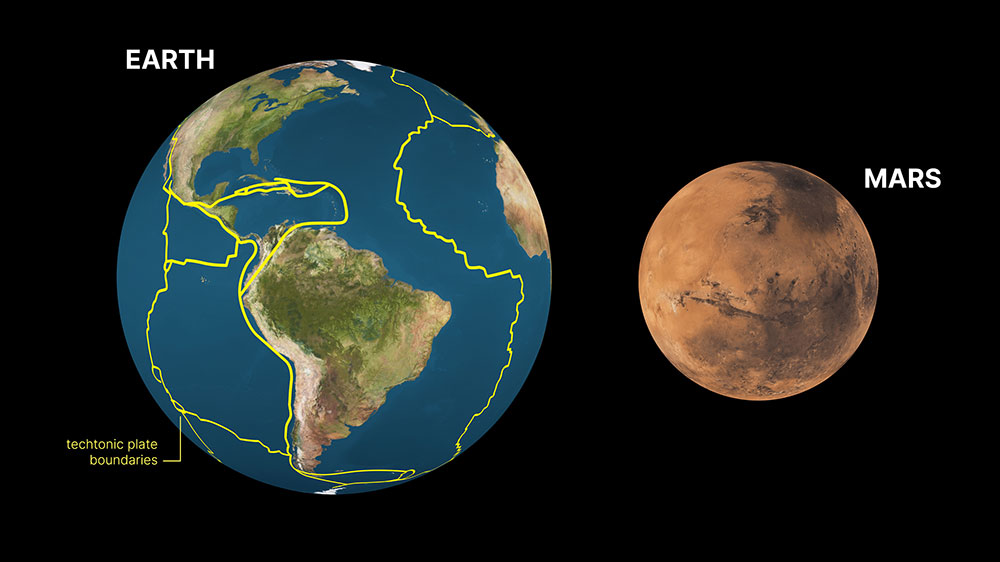 Erde und Mars
Mars' thick lithosphere appears to consist of only one plate. Earth, on the other hand, has seven large continental plates. (Image: NASA/ JPL-Caltech)

Core is liquid and larger than expected

For the first time, the researchers were also able to estimate the size of the Martian core using seismic waves. According to this work, the radius of the core is around 1,840 kilometres, which is about half the radius of the Earth’s core. This means that the Martian core is a good 200 kilometres larger than had been assumed 15 years ago, when the InSight mission was planned. “Having determined the radius of the core, we can now calculate its density,” Stähler explains. Since the researchers know the average density of the entire planet, and the average density of the crust and mantle can be estimated from studies of Martian meteorites, it’s possible to calculate how much material must still be in the core.

“If the core radius is large, the density of the core must be relatively low,” Stähler explains: “That means the core must contain a large proportion of lighter elements in addition to iron and nickel.” The lighter elements include sulphur, oxygen, carbon and hydrogen. However, since their proportion appears to be unexpectedly large, the researchers conclude that previous estimates of the composition of the mantle need to be reconsidered. Nonetheless, the current investigations confirm that the core is liquid – as suspected – even if Mars no longer has a magnetic field like Earth. On our planet, currents in the liquid metal of the outer core create a permanent magnetic field.

The relatively large core also rules out the possibility of Mars having a lower mantle like in the Earth; on our planet, the extremely high pressures that exist at more than 700 km depth lead to the formation of a mineral called bridgmanite. Instead, the measurements on Mars show that the Martian mantle is mineralogically similar to Earth’s upper mantle, which is composed mainly of the mineral olivine. Based on the seismic measurements on Mars, Khan concludes: “Mineralogically, the Martian mantle is a simpler version of Earth’s mantle.” But the seismology also reveals differences in chemical composition, suggesting that Mars and Earth were formed from different building blocks.

The researchers obtained the new results by analysing seismic waves generated by  marsquakes. During an earthquake, energy is released in the form of primary as well as secondary waves, which propagate from the source in all directions. The same is true of marsquakes. The primary P waves oscillate in the direction of propagation, like sound waves in air. The secondary S waves oscillate transverse to the direction of propagation and are slower than P waves. Measuring the time difference between the arrival of the P and S waves at a certain location makes it possible to calculate the distance from this location to the quake’s epicentre.

The InSight mission’s seismometer, whose data acquisition and control electronics system were developed in Professor Domenico Giardini’s group at ETH Zurich, has been monitoring marsquakes since early 2019. The data is sent via NASA’s Deep Space Network and two centres in the United States and France to the Marsquake Service at ETH Zurich. There it undergoes initial analysis under the direction of John Clinton of the Swiss Seismological Service. More than 1,000 marsquakes have been recorded so far. “We could already see P and S waves in the InSight data, so we knew how far away from the lander the marsquakes  were,” Giardini says, “but for a long time we were stuck at that level of understanding.”

Stähler adds: “To say something about the internal structure of planets calls for more than just P and S waves. You need other waveforms.” By this he means seismic waves that are reflected e.g., below the surface or at the core. The researchers speak of PP and PPP phases when a P-wave is reflected once and twice from underneath the Earth’s surface, respectively. Now, for the first time, researchers have succeeded in observing such phases on Mars.

The task proved particularly complicated because the seismograms on Mars contain a lot of echo, which typically occurs when seismic waves pass through shallow layers of porous rock. This complicates the analysis of seismic phases that have traversed the deep interior of the planet. Similar observations were made on the moon after the Apollo 11 astronauts first set up a seismometer there, which is why it took 40 years to detect the moon’s core. This task has now been accomplished on Mars in just two years. Earth, the moon and Mars are the only celestial bodies whose interiors have so far been studied with the help of seismology. “The Marsquakes recorded so far are of low magnitude, below 4. Quakes of this magnitude on Earth would be hard to detect from the same distance. But since Mars does not have oceans, it is generally quieter and we detect smaller events,” Stähler says.

In their observations of Mars, the researchers focused on quakes that occurred between 1,500 and 4,500 kilometres from the lander. “The farther away the quakes are, the deeper the waves penetrate the planet’s interior and the more we can say about it,” Khan explains. In his work on the Martian upper mantle, he and an international team studied the seismic phases reflected from underneath the surface. Meanwhile, for their study, Stähler and other colleagues at ETH factored in the seismic phases reflected at the core to look even deeper into the Martian interior. The ETH researchers were also involved in the third paper on the Martian crust that is part of the trilogy of papers being published.

“We determine the speed of the seismic waves as a function of depth,” Khan says. If the  seismic wave velocity with depth is known, this provides clues to the chemical composition and thermal state of the planet. If the wave speed changes suddenly, this discontinuity typically corresponds to a transition to a different chemical composition. Such discontinuities are evident in the crust-mantle and mantle-core interfaces. Now, using seismology on Mars, the researchers are looking for more discontinuities deep in the mantle and for an inner core like the one that exists on Earth. “These new InSights into the Martian interior will help us learn more about the planet’s formation and evolution,” Khan concludes.