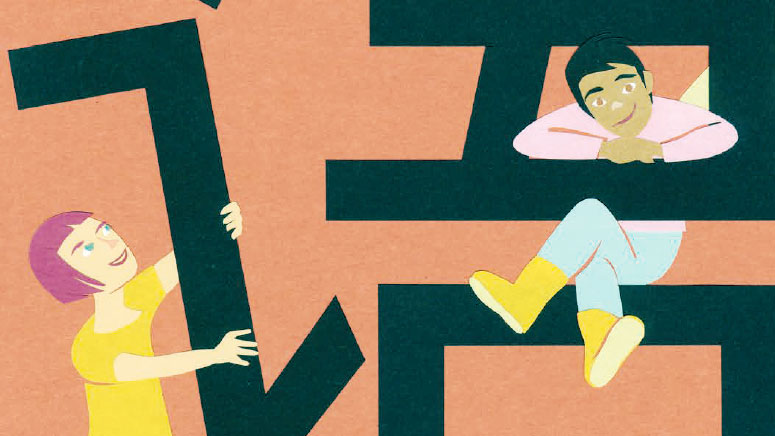 Untangling language: Advances in neuroscience are opening up new perspectives for the treatment of dyslexia. (Image: Illustration: Anna Sommer)

Practice makes perfect – with reading as with so many other skills. Language learning begins when we are still babes in arms, through interacting with our parents and siblings, hearing their voices and observing their facial expressions. The more we are exposed to language, the quicker we learn it and the better we become at it. Children, or rather children’s brains, soak up all the linguistic information that comes their way and analyze and categorize it in order to tease out structures and meaning amid the cacophony.

In this way they learn to decode the sounds and then to produce their own. Parents can thus actively encourage their children’s speech development by talking to them lots – but not only with baby language, stresses neuroscientist Silvia Brem. “Parents should speak with their children as normally as possible,” she says. Brem is assistant professor of cognitive neuroscience in children and young people at UZH. She conducts research into how children learn to read and how best to help those who find it difficult.

The cat or the hat

The unconscious process by which we learn our first language usually goes without a hitch. But for some children things don’t run so smoothly, and they find it harder to process linguistic information. “The crux of the matter is the phonemes,” says Silvia Brem. Phonemes are the smallest phonetic components of a word, which enable the meaning of words to be distinguished, such as the c and the h in cat and hat, or the t and the d in tin and din. To identify the meanings of words, it is essential to be able to recognize phonemes. When this process is disturbed, it is more difficult to learn a language.

Even in infants, there are differences in the way children process language. “That can indicate potential difficulties later on, including with reading and writing,” says Silvia Brem. When we are first learning to read, our brain translates the graphemes, which are the building blocks of written language, into phonemes, i.e. sounds. We learn the sounds first by hearing them. But if we cannot correctly recognize and identify the phonemes in the first place, reading (and life) will be more difficult. An added difficulty is that graphemes (the written letters that make up sounds) can form various phonemes, just as one phoneme can be represented by various graphemes. For example, the two words pheasant and fan have the same phoneme at the start, but one is written with the grapheme ph and the other with f. On the other hand, the grapheme c can sometimes be pronounced as [s] and sometimes as [k]. Once we are more accomplished readers, we store complete words in our brain. Here too it is important that they are stored with their correct spelling.

Dyslexia can be inherited

Difficulties with language processing can be seen even in babies, suggesting that it is a congenital rather than an acquired disability. Silvia Brem stresses that it is still not fully known what exactly causes language disorders. But, she says, “we know that genes play a role.” Genes involved in brain development thus influence the transfer of neurons to the regions of the brain that are important for recognizing language. “Here we see differences in people who have difficulties interpreting phonological information,” explains Brem. This leads to language being perceived differently and makes learning a language more difficult, as well as leading to later difficulties with reading and writing.

A further indication that dyslexia may have genetic causes is the fact that it can run in families: In families in which one or more members already have difficulties with reading and writing, a child is 30 to 60 percent more likely to be dyslexic than in other families. But Brem is careful to stress that genetic factors are complex, and several different genes are at play. It is therefore not possible to simply switch off the gene for dyslexia and all would be well (if you read hell here and scratched your head, it could be that you have dyslexia).

Precisely because the causes are so complex, treating dyslexia is not a simple matter either. The gold standard, says Brem, is straightforward hard work according to the mantra: practice, practice, practice. Practice reading and writing, again and again. All children have to do that, but those with dyslexia need to do it more often and more systematically. It’s also important to support children so that their self-esteem is not damaged. Many dyslexic children lose confidence due to the many negative experiences they have when learning.  With the aim of making reading fun, Brem and her Finnish colleagues at the University of Jyväskylä have developed a learning app called Grapho Learn. It is suitable for all children, whether they have reading difficulties or not.

Advances in neuroscience are now opening up completely new perspectives for the treatment of dyslexia. One research group led by neuroscientist Anne-Lise Giraud in Geneva is working on neurostimulation therapy for dyslexia. Giraud (together with UZH’s Balthasar Bickel) is co-director of the NCCR Evolving Language. How does the therapy work? “We know that when we read and listen, certain areas of the brain are active,” explains Silvia Brem. “In people with dyslexia there are frequency deviations in the oscillations that occur in the brain when we process language.”

These deviations can be remedied with electrostimulation, whereby the brain is stimulated and adjusted to the correct frequency. Research has shown that this leads to an improvement in language processing – the test participants who received the stimulation could then read better. An important detail is that the stimulation has a lasting effect, meaning that people who receive the treatment still have improved reading ability months later. In addition, there are no undesirable side effects. Neurostimulation could therefore be an effective means of helping people with dyslexia

The power of imagination

Silvia Brem is working on another treatment method based on changing the activity in those brain regions that play an important role in language learning. She wants to use neurofeedback to help people with dyslexia to regulate the activity of the brain. It may sound like the stuff of science fiction, but for Brem it’s something well within the realms of possibility. She is currently researching the effectiveness of the method she has developed under the auspices of the NCCR Evolving Language. The test participants undergo an MRI scan which measures how strongly the brain regions involved in reading are activated and displays the activity on a computer screen.

This technique is called neurofeedback. “It’s a bit like a thermometer,” says Brem. According to her hypothesis, to be able to read well, the reading area of the brain needs to have the right operating temperature as it were, i.e. it should display a certain amount of activation. This activation, believes Brem, can be voluntarily influenced. But how? “Depending on what the participant does, the activity level in the brain changes,” says Brem. The test leaders can influence this by saying to the participant, for example: “Imagine you are reading a book.” Just by actively imagining reading, the activity in the brain changes – ideally in such a way that it then becomes easier to actually read a book.

After people have learned how to warm up the brain’s reading area in this way, it should also be possible to do it without the MRI and neurofeedback. They would just need to do mental exercises to activate the brain before beginning to read. If the method is successful, people with dyslexia could regulate the activity level of the reading area of the brain themselves and thus improve their reading competence. It remains to be seen whether this will really be the case, as the study is still in the initial stages. So far, says Silvia Brem, the results are promising. What does that mean for dyslexia treatment? Brem hopes that in the future it will be possible to help people with dyslexia using combination therapy – the classic repetitive practice method combined with neurofeedback and electrostimulation.