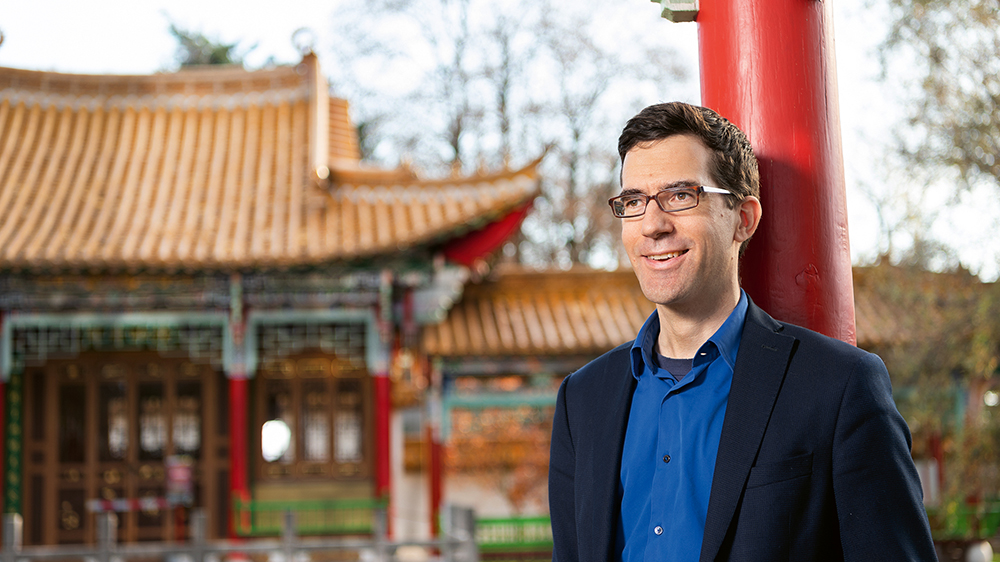 We are living in unusual times. The claret-colored corridors of the Faculty of Business, Economics and Informatics are deserted. David Dorn is also working from home, returning to his office on the third floor especially for this meeting, a mask covering his nose and mouth. In his office, two photographic prints stand out on the walls – one showing a view of central Chicago, with the Art Institute, the other featuring oriental ornamentation on a door in southern Spain. Both images mark important stages in Dorn’s meteoric career. Appointed to the UZH at the age of 35 in 2014, he is one of the most frequently cited researchers in his field.

Flair for figures and data analysis

While complying with social distancing regulations, we remove our face masks (still permitted when this interview was conducted). From behind the mask appears the researcher’s friendly face, which also betrays a hint of roguishness. David Dorn weighs his words, speaking thoughtfully about his career and professional interests.

The researcher grew up in an academic family – his mother a biologist and professor at ETH Zurich, his father a chemist in the industrial sector – in Dielsdorf in the Canton of Zurich. A science degree would have been the obvious choice, but the young man was drawn to economics, which he studied at the University of St. Gallen (HSG). Dorn soon concentrated on political economy, as he was interested in economic correlations and social aspects, and had a flair for the working methods required of the subject: “I like working empirically with figures and analyzing data.” Dorn completed his studies at the HSG with a master’s degree in 2004. “Originally, I had no intention of pursuing an academic career,” he says. However, in the course of his studies he found himself reading the latest research about the labor market, the distribution of wealth, and inequality with increasing interest. This led him to pursue a doctorate on these topics in the context of the United States – because that is where the most revealing data was available.

As a consequence, the young economist’s work took him to the United States. Dorn was particularly attracted by the Anglo-Saxon concept of policy schools, where researchers in disciplines such as economics, political science and sociology analyze socially relevant current affairs. He organized residences at the Harris School of Public Policy Studies at the University of Chicago as well as other renowned institutions, completing his dissertation in 2009 with three essays about the American labor market.

Having gained his doctorate, an academic career seemed the obvious choice: Equipped with his new academic title, Dorn single-mindedly applied for professorships at more than 100 universities before being accepted by CEMFI in Madrid, a graduate school of the Spanish National Bank, in 2009. At this “marvelous institution” he examined the influence of China, the emerging trading power, on the American labor market – and scored a coup. Written in collaboration with two American authors, the study published in 2013 under the title The China Syndrome: Local Labor Market Effects of Import Competition in the United States was a smash hit and is one of the most frequently cited economic investigations of the past decade. Why? For the first time, the authors were able to provide empirical evidence that the cheap products imported from China into the United States since the 1990s had led to dramatic factory closures and a series of negative, long-term repercussions, including social deprivation and alcoholism. “We refuted the conventional dogma that labor markets react rapidly and flexibly to shocks resulting from globalized trade,” says Dorn. Based on his insights into these distortions, Dorn, an expert in American affairs, was one of the few to predict Trump’s election victory in 2016.

Dorn’s spectacular publication opened the doors of academe to him. In 2014, at 35, he joined UZH as by far the youngest full professor at the Department of Economics, where Ernst Fehr was establishing the UBS Center for Economics in Society. At UZH, Dorn has been able to press ahead with his investigations into trade, politics and globalization with a “motivating and loyal” team – soon also in the context of UZH’s “Equality of Opportunity” research focus, which explores economic and social changes that lead to – or are caused by – inequality.

The words “effect” and “influence” recur frequently in our conversation. Dorn is a researcher who would like to gain a better understanding of social developments and contribute towards resolving urgent issues. It is therefore no coincidence that as a member of the Swiss Confederation’s COVID-19 Science Task Force he is also an active and frequent interview partner for the media regarding labor market and globalization issues. He is pleased by their interest, but aware that being present in the media also involves great responsibility. “You have to stick to the facts and refrain from commenting in a narcissistic manner,” he says – a temptation to which the self-assured economist has never succumbed.