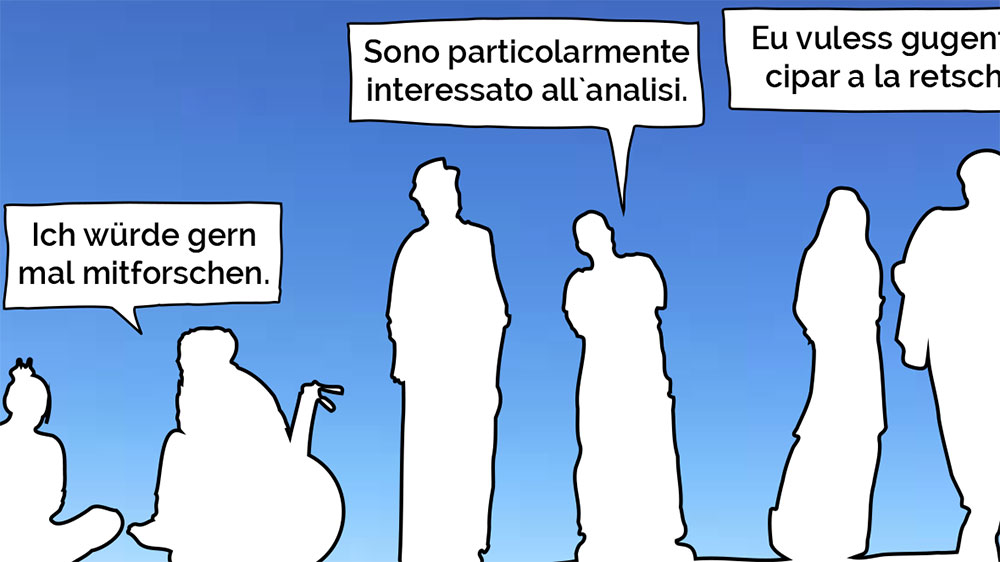 Grafik zur Umfrage
There is great interest in citizen science: around half of the Swiss population can imagine participating in participatory research. (Image: Anna Yang, Fachhochschule Nordwestschweiz)

Whether it’s collecting hydrological data or measuring biodiversity, there are a host of UZH projects where people with a thirst for knowledge can get involved – even if they don’t have an academic degree or university background. The Citizen Science Center Zurich, run jointly by UZH and ETH Zurich, has been developing and promoting citizen science projects together with the Participatory Science Academy since 2017.

Citizen science is based on the idea that anyone can participate in research. But who might be willing to spend their time on participatory research projects, and under what conditions? To date there was no well-founded data available on the overall willingness of Swiss people to get involved in such research. “We wanted to fill this gap with a representative study to be able to identify our target groups even better,” explains Susanne Tönsmann, managing director of the Participatory Science Academy.

The study was developed by the Participatory Science Academy, the UZH Department of Communication and Media Research and the FHNW School of Social Work. A total of 1,394 people over the age of 18 in Switzerland were surveyed for the study.

The key findings include:

Susanne Tönsmann, what do you make of the findings?

Overall the results are very encouraging. Many different people are interested in citizen science and are willing to get involved.

I was surprised to see that younger people between the ages of 18 and 44 were significantly more interested than older age groups. After all, when you’re young, your to-do list is generally longer. I was also surprised that only 8% of respondents were familiar with the term citizen science. It means we have to raise the profile of our participatory research projects.

How can we get people who are potentially interested involved in citizen science?

The study has given us a clear picture of our target group, and this helps us improve our communication. It’s important that we describe the research projects in a way that appeals to people. For example, for a project on air quality in urban neighborhoods, we have to show that people living in cities can already contribute a lot simply by sharing their everyday experiences. Wording matters too, as terms such as “science” or “research” don’t really speak to some people, whereas others are proud if they can get involved in research.

The most popular task is collecting data. What do you conclude from this?

Collecting and classifying data is a concrete task with very obvious benefits. The idea of defining a research question or interpreting results is a bit more difficult to imagine – especially if you don’t have an academic background. But it’s our duty as scientists to show what other parts of the research process can be done just as easily as collecting data.

How can this be achieved?

This is where the Citizen Science Center Zurich and the Participatory Science Academy come in. We have to make researchers working on participatory projects more aware of the diverse and beneficial possibilities of collaborating with non-academics.

Social and environmental topics are very popular among citizen scientists. Does this match up with your experiences to date?

Yes, it’s in line with what we’re currently seeing. In Zurich and all over Switzerland, participatory projects focusing on urban development or people’s own living situation and social topics with an environmental aspect are very popular. People are most preoccupied with topics such as climate change in cities, green spaces, bike and pedestrian-friendly public spaces or new forms of living.

The national survey provides the first Swiss-wide representative data about which people in Switzerland would like to take part in research. It was jointly conducted by the University of Applied Sciences and Arts Northwestern Switzerland (Alexander Seifert), the Citizen Science Center Zurich and the Participatory Science Academy run by UZH and ETH Zurich (Susanne Tönsmann) as well as the UZH Department of Communication and Media Research (Mike Schäfer).

Further information on the study