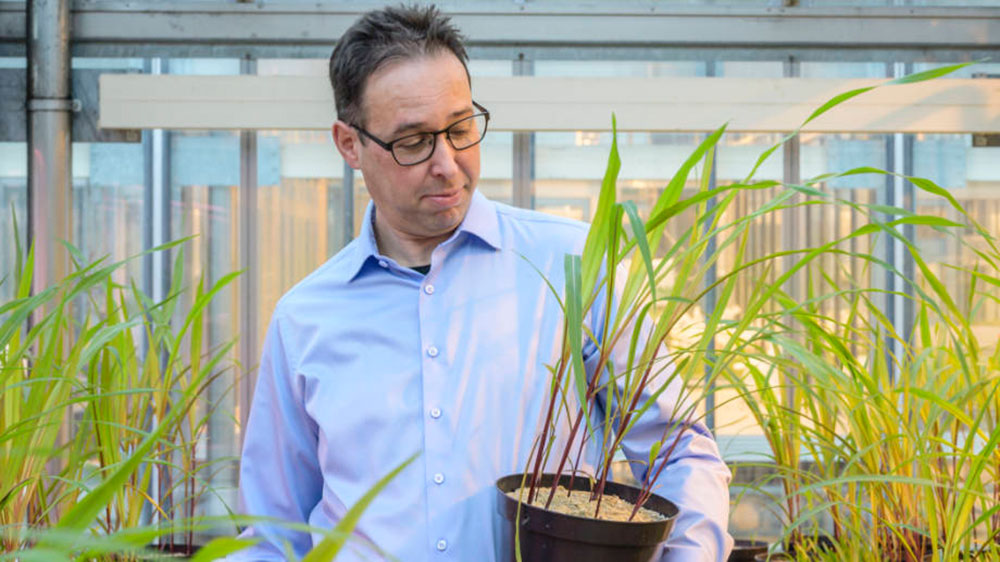 “Of course you can write that,” says Marcel van der Heijden and laughs. It’s fairly easy to guess where he comes from: Netherlands-born van der Heijden has brought the uncomplicated humor his compatriots are famous for to his adoptive homeland of Switzerland. So let us reproduce van der Heijden’s account word for word: Everything started with an incorrigible student.

“She was obstinate,” explains van der Heijden. “She was absolutely set on investigating whether fungi in the soil stimulate plant growth; and the whole thing was to be her Master’s thesis.” He did warn her: In Switzerland, he explained, fields were well fertilized and already rich in nutrients. There was more than a small risk that her efforts wouldn’t produce any results.

But the young woman wasn’t to be deterred. And it’s just as well: The clover that she subsequently grew with mycorrhizal fungi did indeed grow faster and stronger than the untreated control plants in the nutrient-rich Swiss soil. Mycorrhizal fungi feed the fine root system with salts such as phosphates and nitrates, and in exchange receive sugars and fatty acids from the plant. It’s the perfect symbiosis, only a few inches down in the earth.

“We then extended the research to corn, peas and celeriac. That worked as well,” says Marcel van der Heijden. He submitted the project to the Swiss National Science Foundation and was granted funding. The idea sounded persuasive – achieving greater yields sustainably without expensive nutrients. “With conventional cultivation,” explains van der Heijden, “grain and vegetable yields can be increased by an average of around one percent every year; with the fungi, depending on the type of soil, it can be more than 20 percent.”

It’s been known for decades that mycorrhizal fungi can be useful in farming – in theory at least. In practice, no one had really looked into the effect of the fungi. But as van der Heijden relates, by now even giants of agrotechnology such as Syngenta have recognized the potential of these natural growth boosters and are increasingly using mycorrhiza.

Van der Heijden, though, is already a step further. He and his team managed to persuade a good number of farmers in German-speaking Switzerland to give over part of their land to research. Within a short space of time, the biologists had 60 test plots to work with, each measuring 200 square meters (together the size of one-and-three-quarter soccer fields), loosely distributed over the cantons of Thurgau, Zurich, Aargau and Basel-Landschaft – a representative cross-section of the diversity of soil conditions to be found on the Central Swiss Plateau. On these plots, van der Heijden lets “his” inoculated corn grow alongside the farmers’ conventional corn. He and his team cultivate the fungal spores in the greenhouse and mix them into the soil of the test plots. Ongoing care is left to the farmers, who are compensated accordingly. “Shortly before the farmers harvest the corn we go and harvest ours. Then we compare yields,” explains van der Heijden. But ultimately it’s not just fungi that interest the biologist, but the microbiome of our farmland in general. “Microbiome” is the term used to describe the totality of microorganisms that inhabit living creatures, including us humans, or are concealed in the soil. The role that bacteria, fungi and other microorganisms play in agriculture has not been known for very long, as it was only at the start of this century that next generation sequencing was developed, a method allowing the DNA of such organisms to be decoded quickly and inexpensively.

Next generation sequencing makes it possible to work out the composition of microbial societies. “Our goal is to influence microbiomes in such a way that they do less damage to plants and are even beneficial to them,” says Marcel van der Heijden. “We should be making sure the soil has a good biome the same way we eat yogurt to supply our stomach with good bacteria.” The process could be similar to the one with the mycorrhizal fungi, with farmers inoculating their fields with a healthy cocktail of organisms, so to speak. The initial experience with soy has been positive. Here specially engineered bacteria were applied to the seed. As van der Heijden explains, methods like this have already been introduced in some places, and products that can be used to inoculate plants are commercially available. “For now, though, the market is a bit like the Wild West. It turns out, for instance, that 80 percent of the products claiming to be mycorrhiza-based don’t even contain living spores.”

Another approach to making sure the soil has a good biome has been known about for some 500 years. It’s called crop area diversification, and it’s the opposite of monoculture. According to van der Heijden, Switzerland is already on the right track, while in countries like Spain, the Netherlands and the US things are still way off course. If you only ever plant corn, you cultivate pathogens along with the crop. But rotating corn with clover, potatoes and sunflowers before using the field to grow corn again changes the composition of the biome and gives the harmful microorganisms less of a chance.

“There’s more than one way of getting there,” says Marcel van der Heijden. As he points out, ultimately the aim of GM technology is also to eliminate disease and increase yields. Maybe different methods will have to be combined in future to boost yields and make agriculture healthier and more environmentally compatible. But isn’t all this possible without genetic engineering, pesticides and artificial fertilizers? “Yes, of course,” concedes van der Heijden, “but then we consumers would have to be prepared to pay quite a lot more for bread and vegetables – and to eat less meat.”

In his role as a part-time professor at the UZH Department of Plant and Microbial Biology, this is something Marcel van der Heijden tries to get across to his students. He spends the greater part of his time working for Agroscope, the federal center of excellence for agricultural research, at its Reckenholz facility near Affoltern in the canton of Zurich. Here he heads a research group of 25 people, including PhD candidates from UZH. “The goal of my professorship at UZH was to strengthen the role of practical cooperation in research,” explains van der Heijden. This also includes unconventional methods such as the “Beweisstück Unterhose” (trial by underpants) citizen science project (see box). Marcel van der Heijden has always had a practical bent. By age 10 he was tending his own garden and growing beans, potatoes and onions. Later he was active in the youth association for nature, where he loved excursions to the fields and woods. “I knew every species of bird in Holland.” Studying biology was the obvious choice. Now, according to the rankings published every year by the international analytics company Clarivate, van der Heijden is one of the world’s most frequently cited and thus most influential researchers.

Despite the heady acclaim, Marcel van der Heijden still has his feet firmly on the ground that is the subject of his research: “I don’t want to make the world a better place. But I am glad to be making a small contribution to improving farmers’ yields, and protecting the environment by making agriculture more sustainable.”

Testing the ground beneath our feet

“Take part in our campaign to investigate life in the soil and feed cotton underpants to your garden, field or lawn.” Thus reads the call to action on the website of a project with the unusual title of “Beweisstück Unterhose” (trial by underpants) initiated by Agroscope, the federal center of excellence for agriculture, and the University of Zurich. From large-scale farmers to amateur gardeners, anyone can take part in testing the ground beneath our feet and finding out how healthy the wheat growing in the fields and the chives growing in the planting bed are.

The initiators of the nationwide citizen science project, including UZH biologist Marcel van der Heijden, haven’t yet revealed what will happen to the underwear when it’s been in the ground for a protracted period. We can only speculate what the trillions of tiny creatures that inhabit the soil do to the cotton. Once the project launches in April 2021 you’ll find the registration form, the precise instructions on how to “plant” the underpants, and the criteria for evaluating the experiment at www.beweisstueck‑unterhose.ch. The experiment is designed above all to stimulate ongoing public debate on the issue of soil health.