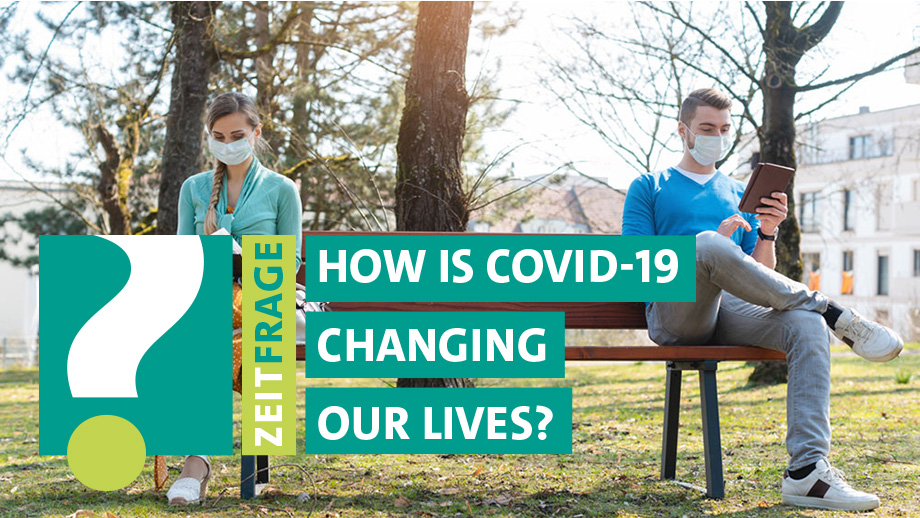 The Zurich Project on Social Development from Childhood to Adulthood (z-proso) has been following the lives of young people in Zurich since 2004. In its latest study, the z-proso team asked some 700 participants about their daily lives during the coronavirus crisis. Many of the 22-year-olds are currently going through transitional phases. Some are busy preparing for major exams or starting a career, while others are facing financial uncertainty and/or dealing with aspects of their social or love life. The pandemic therefore has the potential to affect their lives to a great extent.

The most important findings from the three surveys carried out in April and May 2020 are presented below.

The young adults’ studies and situation at work were among the most affected areas. More than half of the respondents worked or studied from home in April and May (fig. 4). Around a quarter worked at their usual workplaces, but this percentage increased slightly to 30% by the end of May, when some restrictions were lifted. The percentage of participants working short-time or reduced hours was 17% in April and 11% at the end of May.

The survey included open questions to enable study participants to share their views on the crisis. The answers revealed that the changes to their work and studies brought about positives as well as negatives. Some welcomed the increased flexibility at work or university and the fact that they spent less time on public transport, whereas others stated that the shift to digital formats and closure of libraries presented them with challenges for their studies.

As the crisis progressed, the general well-being of the young adults also changed. Overall, the lack of social contacts with family members and friends, including physical contact, was one of the most often cited negative effects. Beyond this, the most common responses focused on economic concerns and uncertainty regarding the participants’ education.

And yet, besides the negatives the survey participants also identified some positive aspects of the crisis. The most frequently named positives included the fact that they were able to spend a lot more time with loved ones at home, pursuing hobbies for which they otherwise had no time or thinking about their lives. These participants were less stressed by the measures to contain the spread of coronavirus.

The measures to control and curb the spread of coronavirus were very restrictive, especially during the lockdown in April. Nevertheless, on the whole the survey respondents were fairly understanding and agreed with most of the measures. Some 93% of participants felt obliged to observe the measures, and between 75% and 82% of participants considered the measures to be be fair and effective, and approved of them (fig. 7).

In contrast, between 9% to 27% of participants believed that there were reasons for ignoring or dismissing the measures; these reasons included the fact that others weren’t following the rules, or that they believed people in high-risk groups such as the elderly only had themselves to blame if they became infected, or that that epidemics had always existed and should run their course.

The participants had less pronounced feelings when it comes to social distancing. Although in April two thirds of respondents still thought it was wrong not to socially distance, this percentage dropped to less than 40% in May. This considerable drop over just six weeks indicates that support for social distancing measures was only temporary. It seems that people, as social creatures, find it difficult to agree with the idea of avoiding social contacts over longer periods of time.

So how well did young adults actually follow the recommendations issued by the FOPH? The overwhelming majority of participants in the survey stated that they were observing the social distancing measures recommended by the FOPH (fig. 9). In April, for example, more than 90% or respondents said that they stayed at home if they experienced symptoms and avoided using public transport as well as contact with high-risk people or groups. Almost as many, 82%, also adhered to social distancing rules.

The survey respondents were very careful in following the recommendations for hygiene, particular when it came to washing their hands regularly and covering their mouths and noses whenever they coughed or sneezed – 95% observed these recommendations. Some measures though were not followed nearly as strictly, for example washing hands after coughing or sneezing (47%). In general, women followed the recommendations more often than men.

While hygiene measures were followed very well overall, there were differences among the participants. For example, (future) academics were more likely than others to practice social distancing, but less likely to respect hygiene rules, possibly because they were less exposed at their workplaces (fig. 10).

The Zurich Project on Social Development from Childhood to Adulthood (z-proso) has been following the lives of 1,300 children into young adulthood in the city of Zurich since 2004. The children were first contacted at age seven when they started the first year of primary school in Zurich. Today the study participants are 22 years old. The study covers a wide range of topics, such as moral development, psychological stress, delinquency as well as prosocial and healthy behavior.

The z-proso team carried out three short surveys to study the effects of the coronavirus crisis on the cohort in April and May 2020. Those who were still part of the z-proso study at the age of 20 were invited to participate. Overall, 786 young adults took part in the first Covid-19 survey, while 650 and 569 responded to the second and third surveys. Another round of questions is planned for September.

z-proso is run under the Jacobs Center for Productive Youth Development at the University of Zurich. The study receives financial support from the Swiss National Science Foundation and is headed up by Prof. Dr. Manuel Eisner, Prof. Dr. Michael Shanahan and Dr. Denis Ribeaud.