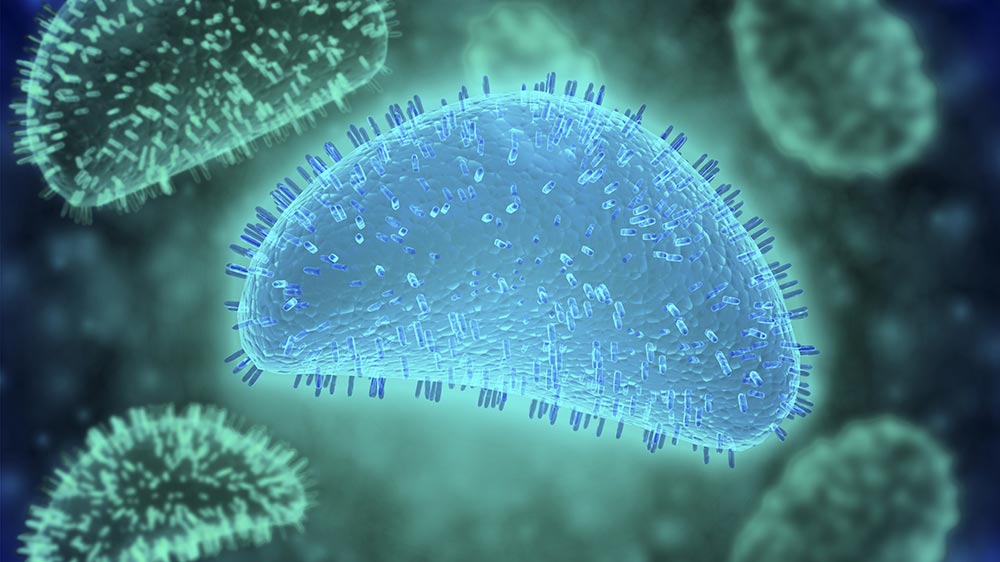 A scientist experimenting with bacteria was amazed one morning to find that large patches where nothing was growing had appeared in one of his petri dishes overnight. The story of bacteriologist Alexander Fleming is famous: In 1928, he discovered penicillin without even trying. Mold had produced a highly effective substance to keep the competition in check. The chance discovery of this antibiotic transformed medicine. Having until then primarily served as an explainer and reliever of symptoms, the modern doctor finally became a healer, equipped with effective drugs to address any human affliction.

Any affliction? Welcome to the flu season. Bacterial infections have lost their sting in the wake of the antibiotics revolution. But often it’s not bacteria causing the suffering, but much simpler organisms, namely viruses. And almost a hundred years after Fleming’s discovery, we still don’t have effective means to combat them. We can’t rely on a similar accidental find. After all, Fleming didn’t invent anything – he merely discovered weapons that nature had already been using for a long time. Given that viruses function in so many different ways, we’re unlikely to find a similar class of substances to combat them so quickly.

To outmaneuver a virus, you have to take a targeted approach and first understand precisely how these pathogens work. Or translated into detective speak, if Fleming was a bumbling professor who stumbled upon the murder weapon while taking a quick breath of fresh air in the garden, the search for a “virus antibiotic” requires more of a profiler, someone who approaches the problem with analytical acuity and plenty of technical know-how. It’s a complicated case. One of the most prominent profilers in this field has his office on the University of Zurich’s Irchel Campus. Urs Greber heads a research group at the Institute of Molecular Life Sciences, and specializes in viral infections. Conversation with him quickly takes a detour if you ask about future treatments. This is because combating viruses isn’t just a clinical challenge; it’s a philosophical quagmire where all sorts of boundaries dissolve. “Yes, viruses make people sick,” says Greber. “But more than anything, they’re interesting for biologists.”

And we’re only just beginning to really understand these biological interconnections. For example, the interplay of viruses and bodies could arguably be seen as a more or less peaceful coexistence that benefits both parties, rather than the battle between an organism and an invader that it was always assumed to be. Indeed, around two-thirds of the genetic information in our blood is of viral origin. This is something that’s been discovered by microbiologists doing research into the so-called virome, which involves analyzing genetic material in the body that doesn’t actually belong to us. They've also found that there’s a sort of gene bazaar where a lively trade in this material takes place. It’s a fact that many of these foreign gene sequences are of great use to us, and it can even happen that they’re then incorporated into our genetic material.

Yet there are also viruses that cause us problems. These quasi-living organisms are very good at protecting themselves from our immune defenses by intruding deep into the system. This makes them difficult to fight. Particularly dangerous are zoonotic pathogens – ones that jump across to us from the animal kingdom. They’re not adapted to us humans, which makes them more powerful.

In most cases, a precarious balance is established between a viral attack and the immune response. But this balance is easily disturbed if we’re tired or stressed, or if the immune system is weakened. “Viruses succeed thanks to their sheer mass,” explains Greber. If they manage to outwit the immune system, they well and truly “over-wind” the metabolism and the body’s defenses to reproduce in a great torrent, which leads to attacks of fever and can even acutely jeopardize the entire organism.

Viruses aren’t always equally active. They can also lie low and almost disappear off the radar. But then the moment can come when they coordinate forces and strike out. And this, the Zurich scientists believe, could be precisely where their weak point lies. The way Urs Greber and his team are trying to outfox the cunning viruses has an almost Homeric quality: The virus is like a Trojan horse used to try and smuggle genetic information into a human cell. This is a difficult maneuver to stop, not least because viruses are so variable and can adapt so quickly.

Let the attackers waste away

This is also where Greber believes the weakness of current antiviral therapies lies. Attacking the virus directly, he explains, involves going for three or four targets at the same time – otherwise the virus mutates and leaves (see box). Greber wants to grab the virus at a point where it's reliant on the body: The virus needs something akin to a traitor in the cell to signal to it when it’s nighttime. Greber says that the virus has to very precisely gauge the moment to strike out, otherwise the whole camouflage trick will have been for nothing. So an alternative therapeutic strategy might be to eliminate this traitor. If the approach really worked, Trojan horses would continue to infiltrate the cell unseen, but then the attackers would waste away, waiting in vain for the signal to attack. There would be no actual infection – in other words, no hostile takeover of the cell function, and no massive multiplying of the virus. The problem with this approach is that the more the therapy focuses on the host, the greater the risk of side effects.

Nevertheless, this is still the most promising idea for antiviral drugs, and some of these so-called inhibitors are already being tested in clinical trials. The key lies in basic research that is shedding more and more light on the way the virus and the host cohabit. Success will come only once this interplay is properly understood.

At the moment, there are three different approaches to tackling viruses. The first is tried-and-tested immunization, in other words protection by way of vaccination. Depending on the type of virus, it can work well. HIV, however, has exposed the limits of this approach. Here research is currently foundering on the variability of viruses and the need to create antibodies with a broad range of efficacy.

First-generation antiviral drugs, for their part, try to attack the virus directly in the body. Examples include the agent Tamiflu, which gained a dubious reputation in the wake of swine flu because it rapidly lost its effect on mutated viruses. Resistances are forcing medicine into an arms race that it is almost bound to lose, not least because of the massive use of this type of antiviral drug on livestock. It’s a problem familiar from antibiotics.

In the last few years, the research community has therefore focused primarily on what is referred to as neo-virology: A more or less holistic approach based on an understanding of the interaction between virus and host. Such therapies endeavor to intervene in these interactions to prevent the virus from getting the upper hand.

The approach is comparable with the latest developments in cancer medicine, such as immunotherapies where the opponent is attacked with the body’s own, well-trained resources, and involves understanding the interplay of the healthy organism and the pathogen and then controlling it by therapeutic means.

Sabeaa Sabeaa commented on 20 May 2020, 10:33 the counter espionage concept Traitors are of 2 kinds, just traitors and a double agents, for the double agents those we need them for our routine physiology we cannot just simply get rid of them, but we should find a way to get more advantage from them or to exploit them in a better way that makes viruses not able to get benefits from them, while the just traitors that don’t play any role in our physiology we can easily just counter them like the counter espionage concept. For both kinds we need to build up a library or a data base in order to find which is which, only then we can plan or courses of actions. We have to think out of the box and more important to work with IT experts because this is the impossible mission without using sophisticated IT.