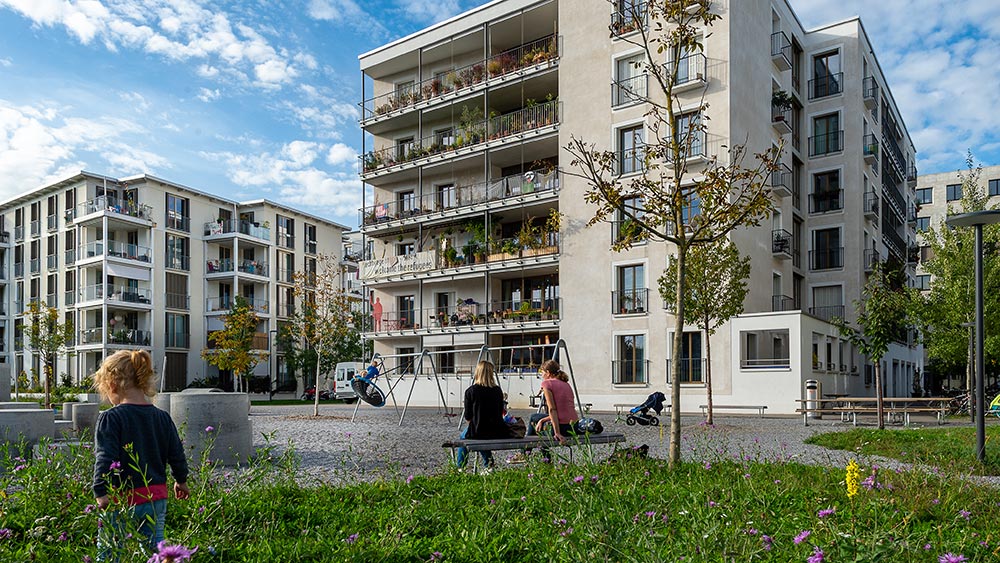 According to Alice Hollenstein, the Hunziker area in Zurich-Oerlikon, with its fragmented structures, green spaces and flexible housing space, meets the needs of many people. (Image: Ursula Meisser)

Do you enjoy walking along Europaallee in Zurich? What about Max-Bill-Platz in Neu-Oerlikon? Would you want to move into a slick new building there? Or would you prefer to live in an old building in Zurich’s Seefeld district? We meet Alice Hollenstein on Heimatstrasse in Seefeld, just a stone’s throw from the Chinese Garden. It’s a placid spot, with houses that date back to the turn of the 20th century. Every building has a distinctive look, smoothly segueing into the street in front of them, and there are plenty of green spaces. To Alice Hollenstein, this street represents everything that people like about a neighborhood.

The psychologist is an expert in a field that is still relatively unknown in Switzerland: Urban psychology. The continuing education courses Hollenstein offers are attended by architects, constructors, real estate experts, portfolio managers, government officials and urban planners alike.  They want to find out more about the emotions and behavior of people living in cities. Hollenstein’s specialist area – which lies somewhere on the border between psychology and economics – is concerned with avoiding mistakes when it comes to developing building projects and urban management measures. “If you’re building for people, you should know exactly what their needs are,” says the deputy head of the Center for Urban & Real Estate Management (CUREM), which is part of the Department of Economics under professor Thorsten Hens.

Zurich is rapidly changing. The city is getting denser and denser, and the character and social fabric of the city’s districts are changing. Previously poor parts of Zurich are being reinvented and attracting well-to-do families and highly skilled singles. At the same time, society is aging. More and more people need barrier-free accommodation that enables them to live independent and autonomous lives for as long as possible. New residential areas have to be in tune with these trends. This requires careful consideration, as where we live has a significant impact on our lives. There’s no such thing as a one-size-fits-all-needs dwelling that will make everyone happy. This is why it’s all the more important to focus on what makes a place worth living in in general. While this may sound obvious, it is often neglected when it comes to planning new residential areas.

People generally prefer cities with small-sized structures. “There is clear evidence that many people consider environments such as those in European old towns, with their intricate city grids, to be beautiful, as opposed to large, humdrum building blocks,” says Hollenstein. Think Niederdorf rather than Europaallee. With its drab buildings, the newly designed alley near Zurich’s main station doesn’t have a very lively atmosphere, believes the urban psychologist. “To many people, it’s cold and unwelcoming,” says Hollenstein. But people want to be stimulated; our senses crave new, diverse and unexpected things. And yet, we don’t like random disorder.

The magic formula for urban planning thus amounts to diversity with a dash of structure. Psychological studies have shown that these types of environment cause the body to release endorphins and reduce stress hormones – in other words, they promote our well-being. According to Alice Hollenstein, the Hunziker area in Zurich-Oerlikon, with its fragmented structures, green spaces and flexible housing space, meets the needs of many people. “People who live here want to embrace living in a community.” They can get together for events in the communal spaces, and it’s easy to meet other people. This is important particularly for people who spend a lot of time at home, for example pensioners. But children and parents also benefit from these structures. Hollenstein, a young mother herself, knows how great the need is for child-friendly urban infrastructure.

Even to first-time visitors, it’s clear that this neighborhood has a lot going for it – colors, plants and individually decorated balconies. “We prefer it when our environment provides us with a sufficient amount of quality impressions,” says the psychologist. This is also confirmed by experiments that monitor and measure the brain activity, hormone levels and eye movement of people as they walk through different streets and districts. “These insights should get more attention when it comes to urban planning processes,” says Hollenstein.

In contrast, a visit to the Glattpark area in the north of Zurich fails to elicit any feelings of joy in the urban psychology expert, who points out a few of the mistakes that were made in the planning of the district. Located on the city limits to Opfikon, the area had long been considered the most expensive meadow in Europe before construction began. An artificial lake was laid out, and several building blocks were built. However, the lake can’t be seen from all of the apartments in these blocks. “That’s a pity,” says Hollenstein, “this would have increased the value of the apartments.” What’s more, there aren’t enough trees by the lake, which means in summer it gets too hot for people to use it as a recreational space. “The planners forgot about the shade.”

It doesn’t stop there, unfortunately. There are very few pedestrians on Boulevard Lilienthal, the street that crosses through Glattpark. “The idea was to add life by having shops and cafés move in on the ground floor, but that didn’t work here,” says Hollenstein, because planning failed to consider the typical behavior of pedestrians and passers-by. People only rarely take roundabout routes on their strolls. When it comes to getting from A to B, they’re mostly pragmatic and keep distances and changes in direction to a minimum. Today, it’s possible to use computers to create models of pedestrian behavior. In addition, qualitative interviews with local residents or on-site observation can be very helpful when it comes gaging the needs and behavior of people.

“In the end, every building project has a responsibility to the surrounding area and the city as a whole,” says Hollenstein. Thanks to her work, basic principles of urban psychology have been included in the urban development mission statement of a Swiss city – an achievement of which she is proud. “After all, the things that people enjoy are often also the things that benefit the climate, biodiversity and prosperity of a city,” says the psychologist.

Urban psychology was established over 100 years ago as a subfield of environmental psychology. In the context of industrialization, researchers originally conducted experimental research into the environmental factors that have a positive effect on people’s performance. In the 1960s and 1970s, the subject experienced a research boom, brought about by the rapid urban development. During these years, the first empirical studies emerged on topics such as aesthetics in buildings, social and structural density, recreational spaces as well as place identity. Urban psychology aims to describe, explain, predict and possibly alter people’s experience and behavior in cities.

The continuing education programs in urban psychology at UZH’s Center for Urban & Real Estate Management (CUREM) are aimed at specialists and executives working in the field of real estate and area development. The programs focus on practicable solutions to real-estate problems. Besides sharing the latest insights from real-estate research with students, CUREM also wants to help the Swiss real-estate industry as a whole to develop new expertise. www.curem.uzh.ch