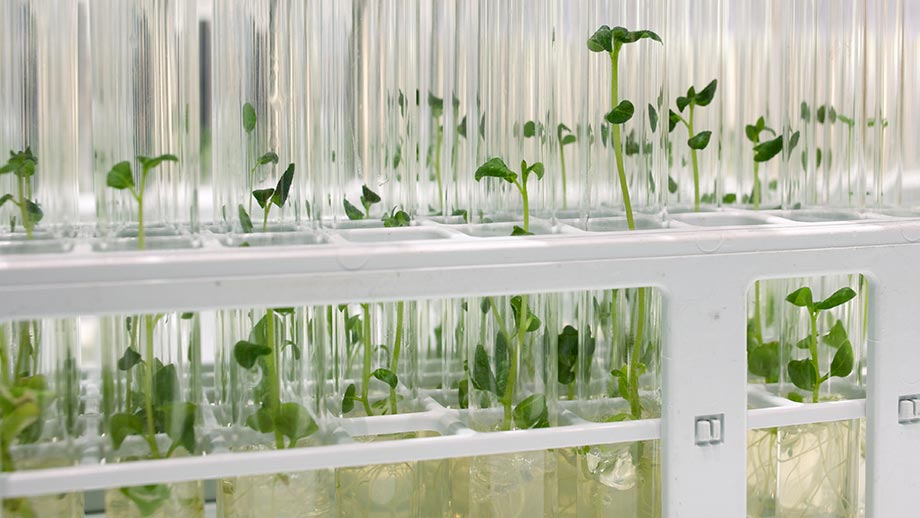 Pflanzen
Organic agriculture and green gene technology could be used to create plants that are tailor-made for their environment and can be cultivated in an environmentally friendly manner. (Image: fotografixx / iStock)

Genetic engineering and environmental protection: For many, these concepts don't really seem to be compatible.  But according to Philipp Aerni, this unlikely pairing has great potential for the sustainable agriculture of the future. Aerni is an agricultural economist working at the Center for Corporate Responsibility and Sustainability at UZH. He believes that if agriculture is to be environmentally friendly and able to meet future food demands, it will need to be based on gene editing technology. “The global population continues to grow, primarily in poorer countries,” says Aerni. “But organic farming alone is not enough to ensure food security and environmental protection at the same time.” However, organic agriculture combined with green genetic engineering might just work.

Of particular interest are plants that are tailor-made for their environment and can be cultivated in an environmentally friendly manner. You can obtain plants with the desired qualities using conventional breeding methods – or as of late with CrisprCas9, a gene editing method that was developed in 2012 and has continued to improve ever since. CrisprCas9 gives scientists the ability to modify or switch out individual genes to create designer plants with tailor-made properties. “Certain genetic engineering interventions are no different than what happens in nature,” says botanist Ueli Grossniklaus. “Genetic engineering can be seen as a new option among already established breeding methods.” Indeed, plants that have been modified via genetic engineering cannot be distinguished from plants that have been modified using conventional breeding methods.

Grossniklaus believes that CrisprCas9 holds great potential for the sustainable agriculture of the future due to its ability to quickly and precisely breed resistant crops: For instance, grains, vegetables and fruits that are more resistant to pests and environmental stressors like heat, waterlogging and drought. “Plants that need less water or fertilizer, for example, can play an important role in agricultural methods that put less pressure on resources,” explains Grossniklaus.

Switzerland could also benefit from this technology, for example by cultivating genetically modified potatoes that are resistant to blight. Farmers currently use copious amounts of agrochemicals to protect their precious tubers, and in organic agriculture copper pesticides are used on a large scale to combat the problem. Both methods take their toll on the soil, something that could be avoided with the use of more blight-resistant plants.

“Prototypes of these plants have been around for years,” says Grossniklaus. “We also know, thanks to almost forty years of experience now, that genetically modified plants don’t cause any health problems. Even National Research Programme NRP 59 came to the conclusion that green genetic engineering doesn't pose any special risk to the environment.” Despite this, genetically modified crops cannot be cultivated domestically – neither in Switzerland nor in most EU countries.

In Switzerland there has been a moratorium on cultivating genetically modified plants since 2005, and the ban is regularly extended. Many people have already made up their minds: Genetic engineering is unnatural and therefore dangerous and bad. “Because of this situation, hardly any politicians advocate for gene editing technologies,” says Aerni. “They believe that this isn’t a topic that they can win votes with.”

Ueli Grossniklaus believes that the deep skepticism towards genetic engineering is rooted in a misunderstanding of naturalness. People have been constantly modifying nature since the beginning of agriculture 10,000 years ago and continue to do so to this day. “All crops that are grown today have been genetically modified,” he says. They have been bred for characteristics such as flavor and yield, either by farmers selecting certain seed varieties or by growers engaging in deliberate cross-breeding and mutagenesis. Mutation breeding, which uses chemicals or radiation to alter the genetic code of plants, has been practiced since the 1950s.

This results in the creation of new and interesting characteristics that can be used in plant breeding. “Many crops that are cultivated today, including in organic agriculture, came about in this way,” explains Grossniklaus. Although mutagenesis changes a plant’s genome, it is not considered to be a form of genetic engineering. This means that mutagenic plants are allowed to be cultivated just like conventional ones. Whether Switzerland will one day place crops modified by CrisprCas9 in the same category as mutagenic crops remains to be seen. The EU has already spoken on the topic: In 2018, the European Court of Justice ruled that gene-edited crops are to be classified as genetically modified organisms and are therefore subject to the same strict legal regulations. “It’s safe to assume that Switzerland will take the same path as the EU,” says Grossniklaus. What is considered genetic engineering is ultimately a political question. From a scientific perspective, there is no clear dividing line between conventional breeding methods and modern gene editing. Both of them change a plant’s genome and thus its characteristics.

A hurdle to innovation

From his perspective as a biologist, Grossniklaus sees the tight regulations on gene editing technology in Switzerland and the EU as a main hurdle to scientific innovation – as well as something that plays into the hands of big seed companies. “In order to bring a genetically modified product to market, you need 200 to 300 million francs and a whole team of patent specialists and lawyers,” he explains. “Only huge companies can afford this.” If the barriers to entry were lower, university research activities could give rise to numerous start-up companies dedicated to developing a wide range of affordable seeds designed for a variety of different growing conditions. “This would be a huge boost to innovation for the sustainable agriculture of the future,” says Grossniklaus.