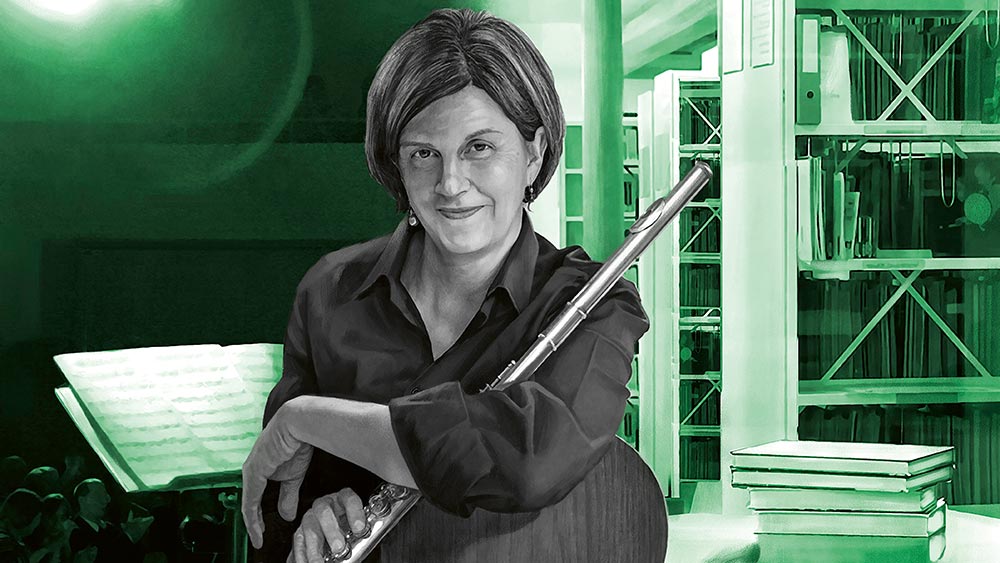 The first thing you notice about Renate Lemmer is her lively temperament. She’s well aware of the vivacious, energetic impression she makes. “That’s the fire in my belly,” she smiles, raising her hands powerlessly.

She really does have something of Goethe’s Faust with two souls dwelling in one breast. On the one hand, there’s the immense hunger for knowledge and intellectual challenge she’s had ever since she was small. At the same time, she feels an equally powerful urge to artistic expression and sensuous experience. As a child, she had no problem making these two great forces cooperate within her. But after she finished high school, she had to decide: Theory or practice? University or art school? Teacher or painter? The 19-year-old wrestled with the decision. Then, quite out of the blue, she remembered an experience from the time she was at secondary school: A performance of Mendelssohn’s violin concerto for schools at the Zurich Tonhalle, with her in the front row, absolutely spellbound. Suddenly this key experience unleashed its full effect. Now Lemmer knew what she wanted to be: A musician. Or more precisely, a flautist. “It was a decision that must have been bubbling away in my subconscious for some time.”

So Renate Lemmer stayed in Zurich, her home town, to study the instrument that had been so close to her heart even as a child. “I wasn’t cut out for the recorder. I always blew much too hard and loud. With the transverse flute, I finally had an outlet for all that breath.” Lemmer attended the Zurich Conservatory for five years, got her teaching diploma, added another three years of study to become a concert flautist, honed her repertoire, gave concerts in Switzerland and abroad, and at the same time taught – first at the conservatory in Bern, then at the music academy in Basel. But 10 years after she’d made her first career choice, the Faustian dilemma again reared its head: Should she surrender to her passion for the instrument and train further to become a solo flautist, or should she go with her head, which longed for intellectual fodder?

After gaining all that experience as a practical musician, Lemmer now opted for theory. By the time she arrived at the University of Zurich in 1992 at age 30, she was ravenous for intellectual stimulation. “That’s why I view UZH as a true alma mater. For eight years it nourished me very nicely.” Lemmer majored in musicology. For the first time she felt she was able to bring the two conflicting themes in her life together.

There weren’t so many students in her year – no more than 20 – but they were from very diverse backgrounds: “Most came direct from high school, but there were also a few senior citizens, and plenty of school music specialists from the conservatory. We were a bunch of like-minded people from different generations.” The instructors were another matter entirely: “With some exceptions they were older gentlemen with a firm view of their role.” While Lemmer felt recognized and appreciated as a trained musician, her desire to work very independently didn’t find much favor. “Some professors wanted to be asked more for advice,” says Lemmer, adding, somewhat self-critically, “Maybe I should have developed a bit more understanding for that.”

Even as a student, Renate Lemmer worked two days a week as a flute teacher in Basel, giving concerts in parallel. But the rest of her time she was glad to spend in the Department of Musicology. Back then the teaching rooms, library, and sound archive were still housed in a building in the late baroque Rechberg Garden between Hirschengraben and Schönberggasse below the UZH main building. “I spent a lot of time there while working on my thesis.”

Early in her studies Lemmer knew what topic she wanted to engage with more closely: The avant-garde in music. She did plenty of groundwork in her first minor, German language and literature, exploring the notion of avant-garde from a literary point of view. In her final thesis (“‘Avantgarde.’ Bedeutung und Problematik des Begriffs in der Musik des 20. Jahrhunderts”), she devoted over 120 pages to exploring the meaning and problematic nature of the term “avant-garde” in the music of the 20th century and looking at the various waves of rebellious, innovative and experimental music, from expressionism and twelve-tone music to serialism.

Renate Lemmer has fond memories of her time as a student. “I really made the most of my eight years at UZH.” And even though she’d actually embarked on her studies for her own enjoyment and satisfaction, it ended up giving her plenty that she could use in her work. In her current job lecturing at the FHNW (University of Applied Sciences and Arts Northwestern Switzerland) on the principles of teaching flute, she particularly benefits from what she learned in her second minor in pedagogical psychology and didactics. Applying this to her own teaching and artistic work, in the normal world outside the university, is a pleasant challenge for Lemmer. “Now I really enjoy combining theory and practice. As a musician on stage I also find I can get into the musical flow more easily.”

As we all know, things didn’t turn out well for Goethe’s Faust. Fortunately, Renate Lemmer was able to make peace with the two souls dwelling in her breast.