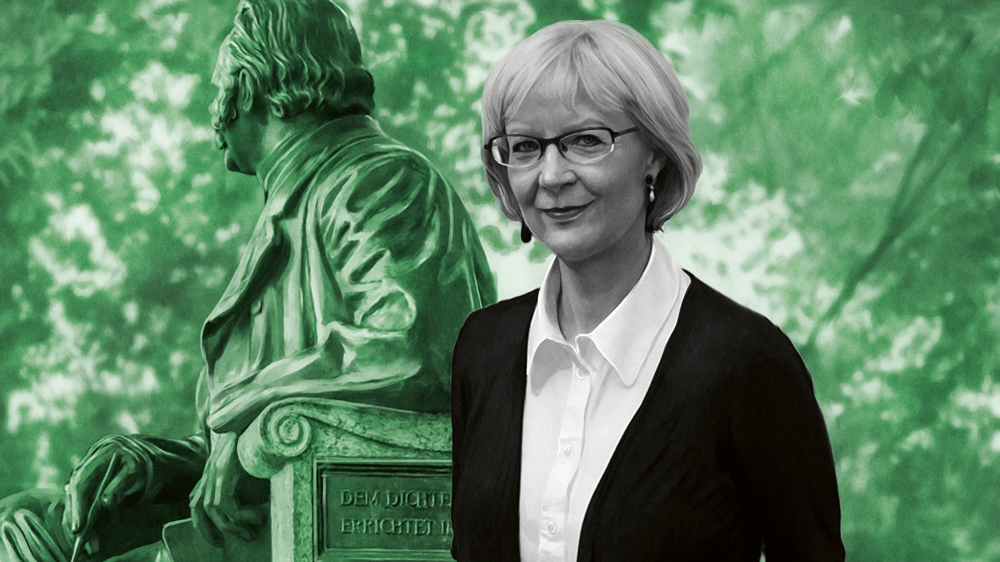 Life as an author can start anywhere, at any time. In the garden, after a day in the office or when traveling. For some, all it takes is a sudden burst of inspiration, while for others, the idea creeps up almost unnoticed. Regina Dieterle’s career as an author began by chance.

Sometime in the early 1990s, she came across a notice at the Department of German Studies. It was a job ad for a position on an editing project about Annemarie Schwarzenbach, the Swiss journalist and traveler. Dieterle, who was in the midst of writing her PhD thesis after 14 semesters of German studies, psychology and media studies, decided to apply and met Zurich-born publisher Roger Perret. “He became my mentor in matters of research, documenting and editing.”

Dieterle, then in her late 20s, throws herself into the book project, digging through the newspaper archives of the Zentralbibliothek Zürich, searching for unpublished editorials, travel reports, society and photo articles written by Schwarzenbach. She learns to cautiously approach the author’s descendants and heirs, and gains access to privately held typescripts, documents and photographs.

Even today, Regina Dieterle’s excitement at having played a part in rediscovering Schwarzenbach’s body of work is palpable. The resulting book Auf der Schattenseite. Ausgewählte Reportagen, Feuilletons und Fotografien 1933-1942, published by Lenos Verlag, is her first work as author and publisher.

Back at UZH, Dieterle returns her attention to her PhD thesis under Peter von Matt, the well-known Swiss literature scholar whose “well-structured and beautifully spoken lectures” she greatly appreciates. “Working with him was extremely inspiring,” the 61-year-old remembers. “I had very good discussions with him, some also argumentative in nature. Probably because he took me seriously as an expert in the field I had chosen for myself.” And this field is a wide one: In her thesis, she investigates father-daughter relationships in the works of Fontane, Frisch and Bachmann.

Dieterle quickly develops a deep connection to Theodor Fontane in particular, whom she admires for his journalistic and literary texts, which contain “wit, self-mockery and a great deal of humanity”. She doesn’t know why she feels such a close bond with this particular German poet, novelist and chronicler, “I just get him, in all his facets and dimensions.” Fontane becomes the literary man at her side.

After completing her PhD, the German studies expert immerses herself in the world of Theodor Fontane. She visits key locations depicted in novels and significant places of activity in his life, and she crosses the landscape that the trained apothecary with the distinctive mustache described time and time again, the March of Brandenburg.

Over 20 years Dieterle pays countless visits to this expansive region and its lakes, castles and monasteries, “to experience Fontane”. In Neuruppin, the small garrison town where Fontane was born and which is often described as the most Prussian of all Prussian towns, she frequently meets Fontane scholars from all over the world. This is where the Theodor Fontane Society is located, a literary association that promotes the author’s life and work. She also regularly visits Potsdam, where she combs through the Theodor Fontane Archives, with the backing of the Swiss National Science Foundation.

In 2001, Dieterle discovers the literary estate of Fontane’s only daughter – and based on these findings writes down the story of her life. Michael Krüger, a renowned publisher at Carl Hanser Verlag in Munich, which publishes Die Tochter. Das Leben der Martha Fontane in 2006, asks Regina Dieterle to write a comprehensive biography of Theodor Fontane to mark the author’s 200th birthday in 2019.

“I’ll make you rich,” Krüger tells her. “Of course I first thought of the millions coming my way,” says Dieterle with a laugh. But as her work on the book progresses, it becomes clear to her what Krüger actually meant with his words: “I got rich on the inside, because writing the biography of this exceptional author was such an enriching experience.” The result of 10 years of research in libraries and archives is a vividly told, over 800-page-long biography of Fontane that provides insights into 19th century Europe and one of the most significant representatives of poetic realism.

Regina Dieterle finds the right tone for imparting knowledge not only in her books, but also in her work as an educator. Alongside her publishing work, she has been working as a teacher at Enge high school since 1993. She teaches the subject Literature and Language, in which her students analyze texts from the 18th century until the present day.

This career path was also more a coincidence than a deliberate decision: “In the cafeteria one day, a teaching and research assistant at the Department of German Studies asked me whether I’d be interested in a position as substitute teacher at Rämibühl high school.” Dieterle enjoyed the work as an educator – and following her PhD thesis went on to obtain her Teaching Diploma. “If you think about it,” Dieterle concludes, “my time at UZH led me to my two vocations, writing and teaching.”

This article appeared in UZH Journal 1/2020