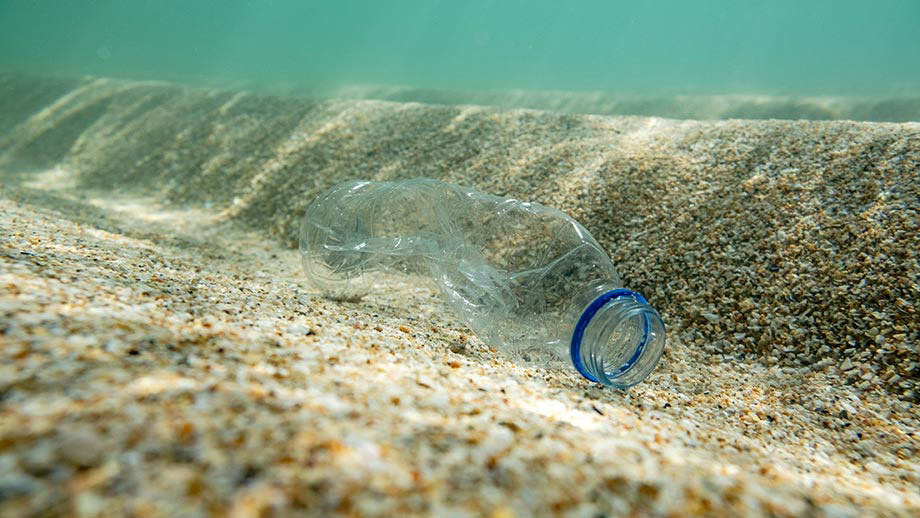 Graphic plastic bottle in the sea
According to estimates, each year between 4.8 and 13 million tons of plastic waste end up in the sea. (Image: iStock, creacart)

The images have become all too familiar: Beaches covered in plastic, PET bottles floating in the sea, nylon fishing lines, folding chairs and much more. According to estimates, each year between 4.8 and 13 million tons of plastic waste end up in the sea. Unfortunately, this trend is likely to continue upward, as global plastic production has increased by more than 600 percent between 1975 and 2015. “Plastic makes up between 60 and 90 percent of solid waste in the oceans,” says Sonja Bertschi from UZH’s Department of Geography.

Plastic pollution in the world’s oceans causes a wide range of problems. Birds can ingest plastic debris and choke, while other marine animals can get caught in old fishing nets floating in the water. “These material effects are devastating, but the toxic effects of plastic are even worse,” says Sonja Bertschi. Plastic polymers react with the seawater, releasing toxins and heavy metals into the water that gather into a layer on the plastic’s surface. The fish that eat these plastic bits also ingest the harmful substances.

The pictures we know from various media suggest that the plastic masses are floating on the surface of the water. “This idea is actually wrong,” says Sonja Bertschi. Plastic may be strong and durable, but it does begin to degrade when exposed to sunlight in seawater. Many plastic bits also sink, which means that a lot of the plastic is below the water’s surface. “What we see is only the tip of the iceberg,” says Bertschi. The crucial thing would be to clean up this tip of relatively new plastic waste before it degrades, and a number of initiatives, such as the Ocean Cleanup project, are committed to achieving this.

One of the problems is that it’s not clear where exactly in the ocean the plastic is floating. While we know that the garbage accumulates to form patches in certain regions of the ocean due to ocean currents, their locations can vary, also depending on the currents.  “What we currently know about the amount and spread of plastic is largely based on data from projections and oceanographic models of currents,” says Sonja Bertschi. To get a realistic, up-to-date picture of the garbage patches floating in the oceans, however, researchers could in the future use satellites in space. This could provide valuable information as to which parts of the ocean would most benefit from a cleanup. Unfortunately, this has not yet been possible.

In her Master’s thesis, Sonja Bertschi and her thesis supervisor Andreas Hüni explored the question of how plastic could be detected using remote sensing technology. She laid out fields of plastic measuring 100 square meters each, with varying degrees of density, on various Swiss lakes. An airplane equipped with an APEX sensor then flew over these fields of garbage at an altitude of between 4,500 and 6,000 meters. The APEX sensor is used at UZH for remote sensing studies and measures how light interacts with surfaces – plants, soil, water and, in this case, plastic. In their plastic project, the two geographers used specific wavelengths in the infrared range that enabled them to distinguish between plastic and water as well as other materials, such as wood. “The innovative thing about our project wasn’t the sensor, which wasn’t new, but how we analyzed the data,” explains Andreas Hüni. The researchers were able to show that their method made it possible to detect and measure plastic in the water down to a relatively low density of 1% surface share. In other words, they demonstrated that their method works in principle.

And yet, there’s still a long way to go until it can be applied in practice. This is because the experiments were carried out under laboratory conditions in Switzerland, as it were. “There was very little swell,” says Sonja Bertschi. Out at sea, of course, waves are par for the course and the white crests of waves could easily be mistaken for pieces of plastic. These circumstances make it considerably more difficult to make out plastic patches. The next logical step would therefore be to transfer the experiments out to sea. However, it is not clear whether this will happen, since the project is currently in the balance.

Freeing the world’s oceans of plastic is an important goal. Preventing plastic waste from landing up in the ocean in the first place, however, would be even better and also do away with the need for cleanup projects. While we’re busy recycling plastic bottles, in many countries plastic waste is simply dumped on open rubbish tips or isn’t collected at all. Some of this plastic gets washed or swept into rivers and lakes, and eventually ends up in the ocean.

Out of sight, out of mind

China and Southeast Asia are considered the worst offenders when it comes to plastic polluters. “But our own actions are often based on the principle ‘out of sight, out of mind’,” cautions Bertschi, since a large part of the plastic waste that arrives in the ocean via Southeast Asia was previously exported there from Europe and the USA. This is why Sonja Bertschi believes investing in waste management infrastructure in the Far East is one of the most efficient strategies to get to grips with the world’s plastic problem.

If we want to shift our society away from plastic, we must also come up with solutions that begin with the consumers. “Regulation only works if it has an effect on your wallet or involves legal provisions,” says the researcher, “for example by introducing a plastic tax or a ban on plastic packaging.” Last but not least, there is still hope that scientists will succeed in developing alternative eco-friendly materials – to make sure that our oceans will continue to be filled with water rather than covered in plastic.