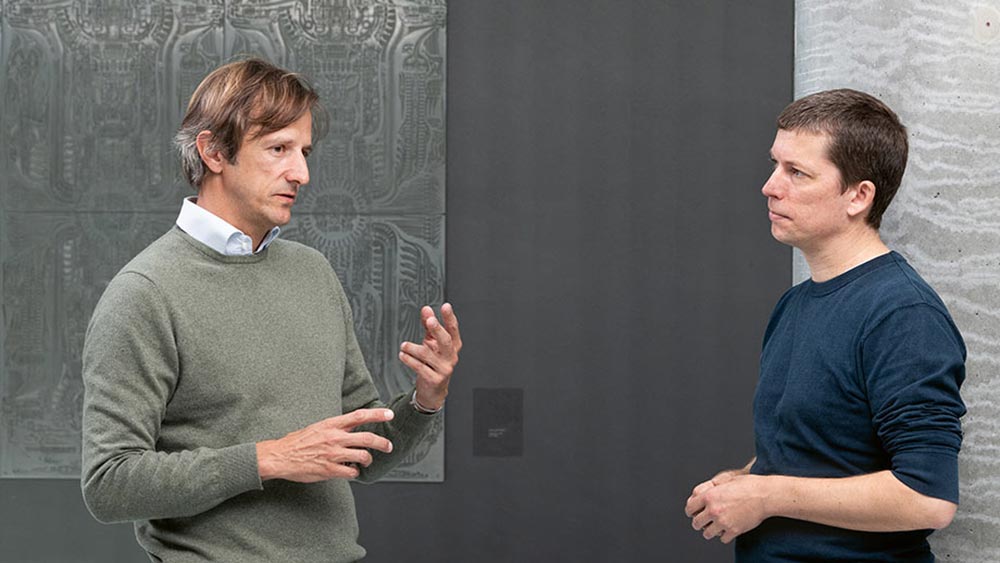 Mark Robinson, your field is bioinformatics; Marc Thommen, you’re a professor of criminal law. The Executive Board of the University recently named you UZH’s open science delegates. What makes you the right candidates for this role?

Marc Thommen: Having founded and run the publishing house sui generis, I’ve managed to gain plenty of experience in open access, one of the mainstays of open science. I see my role as motivating my colleagues to publish their work on a freely accessible basis. The idea is that given that our research is publicly funded, the results should also be freely accessible, without paywalls. Because open science is so diverse and affects so many different aspects of science and scholarship, the Executive Board of the University has chosen two people with a knowledge of different specialist fields. My focus is on open access, but people can approach us both on any aspect of open science.

Mark Robinson: Given my background in bioinformatics, my emphasis is on open data and open code (open source software). The community’s research data and data analysis, like scientific publications, should be made freely accessible. There are a number of reasons motivating me to work for this data sharing: Firstly, if an extended circle of scientists can use raw data it makes additional insights possible. Secondly, open data boosts transparency. Independent researchers can verify and back up findings and scientific propositions. This way open data and open code help assure the integrity of research – I’m thinking replication crisis. I can draw on my experience to help my colleagues at UZH in this area.

Thommen: Another aspect of open data has to do with negative findings: If research data were systematically published, negative findings that nowadays aren’t published in most cases would come to light. This could prevent researchers from embarking on futile lines of inquiry. Researchers have long been calling for the publication of negative findings; this would save a lot of resources and also, for example, avoid studies that harm humans or animals.

The research system is based on a combination of cooperation and competition. Research data are the raw materials from which publications and entire careers are made. That means that open data requires a rethink. Are researchers ready for this?

Robinson: That’s a justified question. In the world I operate in I’ve observed that younger researchers in particular see the benefits of disclosure and are ready to share their data. These days research generates so much data that you need to collaborate to analyze it. In light of digitalization and the explosion in the quantity of raw data, there’s no alternative. The specialist periodicals also play a key role; more and more often they require raw data to be disclosed with the publication. Progress varies from discipline to discipline. In genomics there’s a tradition of disclosure; already in the 1990s molecular biologists in the US had launched the GenBank repository. Open data is the norm in many areas of physics and astronomy as well. But it’s true that in other disciplines we’re not very far along. And there are also misgivings, for example as regards research parasites, a term coined by the New England Journal of Medicine to refer to scientists who try to take advantage of other people’s research data. But I think that in most cases where researchers use other people’s research data, there’s no ill intent involved.

Thommen: It’s a similar story as with open data. The degree to which it’s established very much depends on the discipline. In my field, law, we’re not so far along yet, with 90 percent of the relevant periodicals and databases only accessible for a fee. Other disciplines like life sciences and physics have had well accepted open access periodicals for years. In other words, open access and open science aren’t yet common practice; it’s going to require a cultural change, which we’re trying to kick off.

So what’s holding things up?

Thommen: Open science is a far-reaching process that requires changes in many areas of academia that have a long tradition. In publishing, for example, open access is turning the publishers’ old business model on its head. This itself is a huge change, which has repercussions for the science system. Whole academic careers hinge on publications and impact factors. In other words, the shift to open access entails changes, for example in the way careers are evaluated and appointments are handled. It’s all connected.

Robinson: I’d say that this change is already taking place in many areas of biology. Researchers, and particularly junior researchers, talk about data sharing and cooperation; open science is happening. Of course there are also conventional periodicals with paywalls, but the willingness to publish in open access journals is there. We’re in the midst of a transition.

Thommen: The willingness to tread new paths is basically there in all disciplines. As far as open access is concerned, one of the challenges is that people at universities often don’t realize how much effort a publication involves. All publications are freely available thanks to libraries. But you only see the whole picture when you edit your own journal and work as a publisher. That’s been our experience with our open access journal, sui generis. It’s published by the researchers themselves in line with what we call the platinum model of open access. In other words, researchers are having to take on new roles, and these roles have to be funded.

You’ve mentioned a cultural change for open science. Do you already have plans for accelerating this change?

Thommen: We’d like to encourage and empower everyone at UZH to continue and step up their efforts in connection with open science, whether they’re related to research data, publications, fair data, bibliometrics, or citizen science and research integrity. We’re going to establish an open science council bringing together key players from across the faculties. For us it’s less about launching new initiatives than supporting and coordinating existing activities, and defining a common strategy. The University of Zurich is already doing a great deal; the Data Services & Open Access at the Main Library and the Service and Support for Science department (S3IT) spring to mind.

Robinson: As Marc mentioned, there’s already plenty of expertise at the Main Library. Our role is to give open science a face and boost existing initiatives. With my experience in bioinformatics I can help people with questions related to code and data repositories, or support them with the preparation of raw data. The technical questions around open data can quickly become complex, and vary from discipline to discipline. We want to create a network and support researchers. What’s important is that the issue of open data is in people’s minds and they’re asking how they can contribute.

Thommen: We have plenty of ideas about what could be done: workshops, events, and training. For example, we’d like to create an open science award and invite the faculties to submit projects.

What kind of resources do you have access to?

Thommen: We can spend around ten percent of our job on open science.
Robinson: We’ll also be getting support from an office that will run our activities and manage the open science council. It will work closely with the teams at the Main Library.

Open science was originally a bottom-up initiative, with researchers calling for paywalls to be taken down and advocating data sharing. Now it’s an official doctrine that’s being demanded and encouraged from the top. What’s your view of this development?

Thommen: It certainly makes sense. I guess the two of us are the best examples of what’s happened. For years I’ve been engaging with open access, and Mark with open data and open code. Now UZH has promoted us to official delegates to accelerate the process.

Robinson: I think that’s the way it has to go. Researchers have to make it happen in their day-to-day work, but at the same time the university as an institution has to promote open science.

With the appointment of two open science delegates, Mark Robinson and Marc Thommen, the Executive Board of the University is placing greater emphasis on a topical issue in science and research. Open science is all about cooperating and making insights freely available. It’s an umbrella term covering various efforts designed to maximize the sharing of data, methods, and resources, and create the greatest possible transparency in the scientific and scholarly process. Driven by digitalization and networking, the aim is to make the scientific process more transparent, cooperative, and ultimately also more credible. Open access and open data, in other words free access to scientific publications and data, are in the foreground. But the concept of open science goes further, also encompassing things such as FAIR data, research integrity, and citizen science. LERU, the League of European Research Universities, to which UZH belongs, distinguishes eight areas of open science, and alongside the European Research Council, the Swiss National Science Foundation, and the Rectors’ Conference of the Swiss Universities (swissuniversities), propagates implementation of the principles of open science. In this context it’s worth underscoring the pioneering role played by UZH: The University of Zurich made a commitment to open access, one of the pillars of open science, as early as 2003 in the Berlin Declaration. With the appointment of its new open science delegates, UZH is giving the process additional impetus.