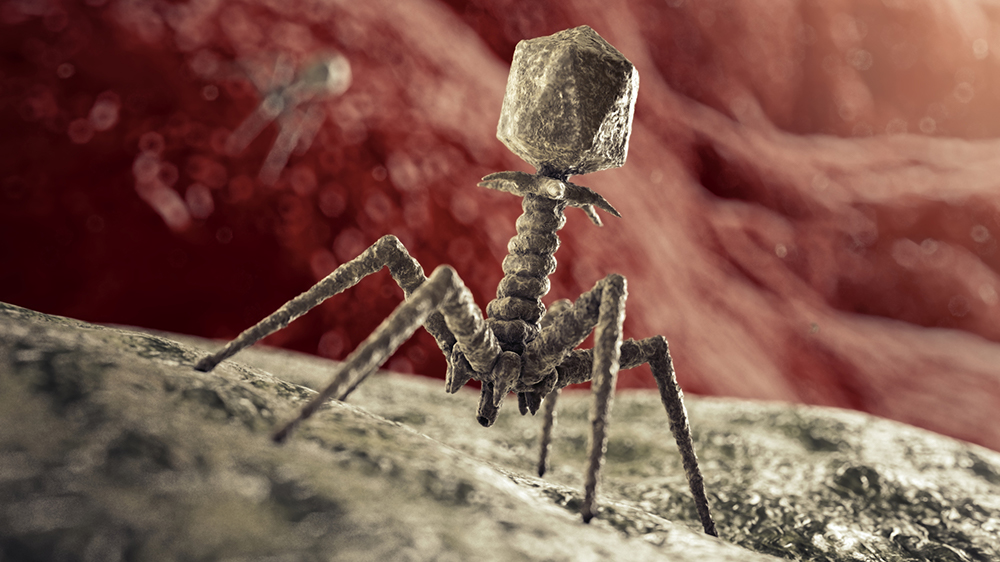 bakteriophage
Illustration of a bacteriophage T4 entering a bacterium. The phage actually resembles a lunar module and can inject its genetic material, whereupon the bacterial germ dies. (Image: istock/fpm)

Bacteriophages are highly specialized viruses that attack and destroy bacteria. French-Canadian biologist Félix d'Hérelle gave these viruses their name, which means “bacteria eater”, when he first described the tiny entities over a century ago. He later teamed up with biologist George Eliava to co-found the first institute for bacteriophage research in Tbilisi. Following the discovery of penicillin in the 1920s, antibiotics became the dominant form of treating bacterial infections, and bacteriophages were largely forgotten – at least in the West. University Medicine Zurich has now given these obscure viruses a new lease on life thanks to their ImmunoPhage project, which will develop bespoke bacteriophages to treat urinary tract infections.

While this new approach comes with the attendant risks of a novel therapy, it also holds great promise for the future. Bacteriophages could be the solution to the pressing problem of antibiotic resistance, which is pervasive when dealing with urinary tract infections. “We have high hopes for this pioneering project in the battle against antibiotic resistance,” says Thomas M. Kessler, one of ImmunoPhage's three principal investigators. “We are the only ones in the world working on this therapeutic approach.” Kessler is professor of neuro-urology at UZH and serves as senior physician in the neuro-urology department at Balgrist University Hospital.

The University Medicine Zurich initiative is home to the complementary disciplines of microbiology, immunology and urology, which have joined forces to make this trailblazing project possible. Martin Loessner, a professor of microbiology at ETH Zurich, is in charge of engineering the phages. These viruses inject their genome into bacteria, which then use this genetic blueprint to produce new viruses – a process that ultimately leads to the destruction of the bacteria. Bacteriophages, which are found in drainage water and environmental samples, are picky: they usually only infect one specific kind of bacteria. “We take bacteriophages out of their natural environment, isolate them, and then engineer them according to clinical criteria,” explains Loessner.

Urinary tract infections are usually caused by Escherichia coli (E. coli) or strains of Klebsiella and Enterococcus. The researchers are planning to build a bank containing hundreds of phages capable of efficiently attacking and destroying infectious bacteria. As explained by Loessner, using the phages in their natural form would be insufficient for this purpose – hence the bioengineering. Scientists also want to boost the healing powers of the phages by equipping them with genes for immune modulators such as interleukins and cytokines. In this way, they would not only destroy bacteria after being administered at the site of infection, but they would also activate the patient’s immune system and self-healing powers. There are even plans to bioengineer phages to use as immunotherapy against certain types of bladder cancer.

The immunological expertise required for the project comes from Onur Boyman, professor of clinical immunology at UZH and director of the Department of Immunology at UniversityHospital Zurich. His team has been investigating the molecular immune response of patients with recurring urinary tract infections. Their findings will be used to create systems suitable for testing the phages’ effectiveness in the lab, which will enable scientists to identify the most promising phages and “personalize” them for therapeutic applications.

As bacteriophages can also trigger a defensive immune response, the researchers will also be analyzing the antibody status of patients undergoing phage therapy. The project also aims to explore the immunogenic potential of bacteriophages, a subject that requires a great deal of specialized knowledge. “ImmunoPhage holds great potential for using novel bacteriophage immunotherapy to fight chronic urinary tract infections. In order to unlock this potential, it's essential for different disciplines to work hand in hand,” says Boyman.

One of the elements in this interdisciplinary mosaic is provided by Thomas Kessler’s experience in clinical urology. Kessler has a wealth of experience in treating urinary tract infections and is well aware of the urgent need for new therapeutic approaches, as over one-third of patients suffer from recurring infections. Treating these patients has become more difficult due to the increased spread of antibiotic-resistant bacteria.

Kessler is one of the few doctors in Switzerland who has experience treating patients with phage therapy. He recently teamed up with a researcher from Tbilisi to conduct the first randomized and controlled clinical trial on the effectiveness of bacteriophages in treating urinary tract infections. The study compared the effectiveness of bacteriophage cocktails versus treatment with antibiotics. In the end, the phages did not perform worse than the medication – insufficient results, according to Kessler. And yet, he believes that the ImmunoPhage project can deliver a better outcome due to the phages being equipped with immune modulators and administered based on patients’ individual profiles.

ImmunoPhage’s research into these beneficial viruses is also helping to lay the groundwork for the acceptance of this novel therapy: bacteriophages are currently not recognized as medicinal substances by the Swiss health authorities. This is yet another milestone that ImmunoPhage hopes to achieve with its pioneering work.

University Medicine Zurich is an initiative that aims to foster cooperation between the University of Zurich, ETH Zurich and the University’s hospitals in the overlapping areas of biomedical basic science, the natural sciences, engineering science, clinical research and healthcare.